Posted in: Disc Reviews by Gino Sassani on October 16th, 2010 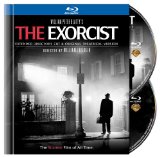 Regan MacNeil (Linda Blair) is going through more than the usual puberty traumas. She pees on the carpet, curses a blue streak, causes objects to fly around the room, and speaks in the voice of Mercedes McCambridge. Her mother Chris (Ellen Burstyn) takes her to every medical professional under the sun, to no avail. With her daughter’s life in the balance, she turns to Father Karras (Jason Miller), asking him to perform an exorcism. But not only is he skeptical, he has his own problems, not least of which is losing his faith. Meanwhile, Regan’s symptoms of possession grow steadily worse…

The most successful horror film of all time (and, adjusting for inflation, still the ninth most successful film ever made) works as well as it does for a number of reasons. The performances, especially from Burstyn and Miller, are grounded and very convincing. The visual effects still hold up, but the sound design is as powerful as it ever was. It’s also a smart, adult horror film, such that even if one disagrees with its philosophical and ideological stance, it remains no less compelling, no less interesting.

It also comes to us in two different versions, and trying to make the case for either being the “definitive” version is difficult. This is a film that seriously challenges the auteur theory, because though there is no denying the force of William Friedkin’s direction, the ideas behind the film, not to mention the novel and the screenplay, are the work of William Peter Blatty, who also produced (and pops up for a brief cameo during the campus film shoot sequence). In other words, there are two very strong artistic personalities behind the movie, and they differed over its release form. So while the 1973 theatrical release is true to Friedkin’s vision, Blatty was very disappointed by the removal of scenes whose absence, he felt, removed the spiritual and philosophical heart of the film. Friedkin eventually consented to their reintegration for “The Version You’ve Never Seen.”

So really, we have a director’s cut, and a producer/screenwriter’s cut, and there’s a case to be made for either. For instance, as cool and freaky as the spider walk is, its presence is a distraction from the emotional climax brought on by Chris receiving the news of Burke’s death. In any event, both versions are essential viewing, and it’s nice that not only did the revised version not make the original vanish from sight, but both are present here. So decide for yourself, but by all means see the film.

Both versions of The Exorcist are presented in the original theatrical presentation of  1.85:1. The 1080p image is arrived at with a VC-1 codec at an average of almost 30 mbps. This print is vastly superior to the previous DVD releases. Both the print itself and the transfer technique show marked improvement. Gone are the distracting grain and film artifacts, and in their place is a finely-reproduced digital masterpiece that seems to deny the 25 years since the film’s release. Colors are brilliant and near reference in quality. Flesh tones are a bit dark but add to the overall atmosphere of the piece. Blacks are the true perfection in this print. Shadows are quite distinctive, and dark shades are solid in their distinctiveness. The high-definition image presentation allows you to find details in this film for the first time. This is a very solid image in every way.

The DTS-HD Master Audio 5.1 does offer incredible expansive range. If ever a film was poised to make use of more modern Dolby Digital 5.1 sound, it has to be The Exorcist. This re-mastered sound makes startling use of the newer format. You’ll find the film is just loaded with atmospheric sounds that, while haunting in 1973, are downright chilling in this release. There is no evidenced distortion and dialog is always upfront and clear. You really gain an appreciation for the Tubular Bells score in this new audio presentation. The music is as brilliant and haunting as it has ever been.

There is an Audio Commentary by Director William Friedkin which is the same used on previous releases of the film. There is a track on both discs/versions of the films. It is informative but not particularly entertaining.

There are two discs to be found here. One disc features the original theatrical form of the film. The second features the extended version. Here’s where you get that spider crawl. The discs are held inside a hard-bound full color booklet with plenty of stills and information on the films. This is truly a collector’s edition.

Each disc comes with the features that their respective DVD had in the earlier release.

In addition to those features, you get:

Raising Hell – Filming The Exorcist: (30:03) HD This feature is driven by William Friedkin and Blatty. They look back on the production. There is a ton of sweet behind-the-scenes footage that includes effects and makeup tests.

The Exorcist Locations Then And Now: (8:30) HD Take a look at some of the famous Georgetown locations in the film and see how they look in 2010. You’ll be surprised at how little they’ve changed.

Faces Of Evil – The Different Versions Of The Exorcist: (9:52) HD Friedkin talks about how 20 minutes of the film got cut. He explains the reasons and then explains how he and Blatty got together in 2000 to reintegrate the material for the “Version you’ve never seen”.

Interview Gallery With William Friedkin and William Peter Blatty: (9:02) The two sit at a table and discuss a few aspects of the film. It’s a vintage piece in three parts with a handy play-all option.

Both discs have trailers and radio/television spots.

Few films have had the impact of the original Exorcist. William Peter Blatty’s original book was a phenomenal hit. The film’s intense imagery and in-your-face brutality was all the more disturbing coming from a young teenage Linda Blair. What makes this film effective, however, is the subtle touches: The quick-flash demonic faces, the eeriest backward language of the demon, and the haunting moans that culminate in one of the truly scariest films ever made. This release restores footage, long legendary, but not seen by a movie audience. I remember seeing pictures of Linda Blair’s “spider crawl” in Famous Monsters of Filmland in the 70’s. To call this film a classic would be stating the obvious.

Nearly forty years after the fact, The Exorcist is still a frightening film. Currently Hollywood is preparing a prequel. If ever a film should be left to stand on its own, The Exorcist certainly fits the bill. This is one of those older classics that greatly benefits from the use of newer technology. This battle between pure evil and good absolutely “compels you”.

Gino Sassani is a member of the Southeastern Film Critic's Association (SEFCA). He is a film and television critic based in Tampa, Florida. He's also the Senior Editor here at Upcomingdiscs. Gino started reviewing films in the early 1990's as a segment of his local television show Focus. He's an award-winning recording artist for Omega Records. Gino is currently working on his 8th album Merchants & Mercenaries. Gino took over Upcomingdiscs Dec 1, 2008. He works out of a home theater he calls The Reel World. Favorite films: The Godfather, The Godfather Part II, The Body Snatcher (Val Lewton film with Karloff and Lugosi, not the pod people film), Unforgiven, Gladiator, The Lion King, Jaws, Son Of Frankenstein, The Good, The Bad And The Ugly, and Monsters, Inc.
“31 Nights Of Terror” Secretary (Blu-ray) “31 Nights of Terror” The Tomb