Posted in: Disc Reviews by William O'Donnell on February 8th, 2012 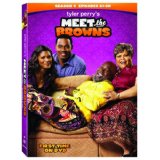 First was the play, then came the film, and now we’re 140 episodes deep in Meet The Browns sitcom. Like a lot of Tyler Perry projects, the family dynamic can be a bit bamboozling at times. So…it’s an elderly man living with his daughter and his niece and her husband and their adopted kids, with regular appearances by his neighbour who is also Aunt to…oh heck, let’s just get on with the review…

My mind immediately wanted to draw comparisons between this and another Tyler Perry sitcom, House of Payne (a volume of which I have panned on this very site: http://upcomingdiscs.com/2011/07/23/house-of-payne-volume-8/). To my relief, this show is nowhere near as stereotype ridden nor aggravating as “Payne.” That being said, this is, by no means, a great comedy. The stories are rehashed (the season opener even uses the heavily treaded Flintstones gimmick of having someone become a new man after being bashed on the head), the character dynamics confusing (one of the adopted children looks nothing like his “family” and is interacted with so little at times that I thought his character might have been a ghost living in the house), and the laughter often only comes when they resort to some sort of slapstick when a punchline couldn’t be conjured up.

Speaking of slapstick, the central character, who is mostly known as Mr. Brown, is a man in his mid-70s (played by an actor in his 40s) who acts and dresses like a clown. Mr. Brown speaks with a high pitched screech, wears clothing so colourful they will make you reach for the volume knob, and he spends most of his time either sassing his loved ones, breaking out into dance, or spinning in a circle while screaming. All of the other performers at least ATTEMPT to give natural performances. As more episodes played before my eyes, I could not decide whether to criticize or applaud this choice to have a clown plopped into the middle of such a show. I suppose it is not far off from the character Steve Urkel’s presence in Family Matters. Mr. Brown provided some of my heartiest chuckles (and, call me bias, but get ANY smiles or laughs from a Tyler Perry production is just left of being a miracle) but he also represented going to the lowest common denominator for the sake of those same chuckles. His clowning around is nothing new or spectacular, it is simply the easy way out of a scene.

Dolby Digital Mono. Everything is mixed together well. It all comes from your front speakers so there’s no immersion…and I’m honestly thankful for that. Let’s you and me keep our respective distances, Meet the Browns. Yes? Good.
Subtitles in English and Spanish.

The best compliment I can give this show is, it’s not as bad a House of Payne. It offers some laughs, but nothing about it is all that memorable or original. Just another low-grade, relatively cookie-cutter sitcom.