Posted in: Disc Reviews by Michael Durr on February 8th, 2012 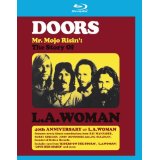 Some music due to my age and music exposure, I just do not quite get. Led Zeppelin, Eagles (once I got out of college) or Black Sabbath, I love. Rush? I can not stand them. Pink Floyd? Way over-exposed to the point where I just do not want to listen to them except one in a while and only to certain songs. The Doors? Hrmmm, well I do like some of their songs. As it just so happens, the Blu-Ray review I have for you today involves my favorite Doors song, L.A. Woman.

The Doors always envisioned themselves as a four man band, a modern jazz quartet of rock and roll. They were working on intellectual levels higher than a lot of bands. In 1970, they were working on their six studio album. Previous albums had been the same, an almost standard rock and roll band with guitarists, drummers, keyboards, and Jim Morrison. They want to try and do something different: bluesy, with horns and elements of jazz. Work started in the December of 1970 to produce: L.A. Woman.

The first song on the album was Changeling. It spoke to Morrison and the band changing along with it. As mentioned, they wanted a bluesy, jazzy feel to the music. But also around them the world was changing. The world was dealing with the Vietnam War, with Cambodia. There had been assassinations, such as Martin Luther King and Bobby Kennedy. We also had music pioneers such as Janis Joplin and Jimmie Hendrix die due to drugs. Morrison had a drug of choice, it was alcohol and it consumed him.

We move on to the third song, Been Down So Long which speaks to Jim Morrison himself. He had felt the full effect of the Justice system due to an incident in Miami. Fourteen thousand people and it was considering a home coming party for the lead singer since he had been born there. But he proceeded to incite a riot and reveal himself in an indecent manner. That almost killed the band and in all likelihood probably led to the eventual death of Morrison himself.

They went back to the studio and out of the limelight to create the album. At first, it seemed like a mess and the general conception was boredom. Their producer, Paul Rothchild dismissed the style of the album and Bruce Botnick was brought in instead. Songs like Crawling King Snake (a John Lee Hooker number), the eighth song on the album seemed perfect and were a call back to the bluesy roots they were after.

Love Her Madly, the second song on the album had fantastic lyrics including “Don’t You Love Her Madly As She Walks Out The Door?” It ended up charting number eleven on the Billboard charts, the highest of any song on the album. Guitarist Robby Krieger wrote the song and performed it with legendary bassist Jerry Scheff (think Elvis). It was a hit the minute they first played it and it did even better in Canada, charting all the way up to #3. But then there was L.A. Woman and nothing was the same.

This documentary runs about an hour long and basically takes time to go over every song on the album. They bring in band members like Robby Krieger, John Densmore, and Ray Manzarek as well as special guests like Elektra Records founder, Jac Holzman, Bill Siddons (manager) and Bruce Botnick. There are also friends and colleagues of the band that throw in various sound bytes as needed. The footage is a mixture of recent interviews and historical footage.

They talk a lot about the album but they also talk a lot about Jim Morrison since it was shortly after the album was done that he left for Paris never to be seen again. He died on July 3rd, 1971 in Paris. The three band members have done their best to this very date to carry on without him with countless reunions and guest vocalists. But needless to say, they have never achieved the level of stardom or creativity that they did with him on lead vocals.

As mentioned above, I am not a huge Doors fan. But this documentary is certainly better than say, Val Kilmer in tight pants screaming “I am the Lizard King”. With that said, this is probably my favorite collection of songs by the band as I find it to not like infectious tunes such as L.A. Woman or Riders on the Storm. So a documentary that goes over influences and stories of the period, it is a pretty good way to spend an hour (and roughly another hour if you want to tackle the special features).

The video is in 1.78:1 widescreen presentation in 1080i resolution. Even though Eagle Rock elects to use interlaced rather than progressive, this track looks good. Face definition for the interviews is detailed and impressive. Naturally, there is some historical footage here, but it looks like they cleaned it up the best they could. Color looks accurate and fleshtones are spot. Visually, it is a very pleasing music documentary.

For the audio portion, we get a 5.1 English DTS-HD track (5.1 Dolby Digital and PCM 2.0 tracks also included). Even in a documentary setting, Eagle Rock does a great job with sound. Dialog is crisp and clean and there are no problems understanding the telling of L.A. Woman. Music is pumped through the speakers and does this with incredible clarity and pitch. Honestly, if I had actually liked more of the Doors, it would have been a jamming track. Subtitles are included for English, Spanish, French, and Dutch.

To coincide with the blu-ray documentary release, a 40th anniversary edition of the cd, L.A. Woman was made. It can be found at Amazon and plenty of other retail places and includes a re-master, alternate versions, She Smells So Nice and the blues standard, Rock Me. This documentary before us is a nice companion piece to the cd that was rated by Rolling Stone as one of the 500 best albums of all time.

The video and audio are special and are worthy entries to the Eagle Rock catalog. The studio is also finally getting the concept of meaty extras and includes some great extra footage for us to peruse. I will recommend this for Doors fans. Casual fans will find this one a bit of a harder sell. I think one has to be willing to understand Jim & the band or at least be willing to appreciate the music. The Doors will not be in my top ten bands of all time, but this was a good way to know more about them.

Michael Durr has been reviewing movies for the better part of fifteen years now. He primarily enjoys thrillers, sci-fi, animation and even a little courtroom drama. His favorite films include Escape from New York, the Goonies and anything with Alyssa Milano. When he’s not praising Kurt Russell as the greatest actor of our time or scratching his head over a David Lynch flick, he’s spending time at home in Texas with his lovely wife, Lori and his amazing son. How they put up with him is a mystery, but even Basil Rathbone doesn’t have the time to solve that one.
Notorious (Blu-ray) Meet the Browns – Season 4