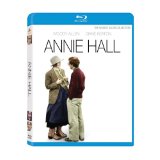 This April will mark 35 years since Woody Allen emerged as a world-class comic filmmaker. Although Annie Hall was his seventh feature (if you include the voice-over spy-spoof What’s Up, Tiger Lily?, which you certainly should), and although Allen already had a sizable group of admirers (including this longtime fan), his 1977 mainstream smash gave him commercial clout and a little something called the Best Picture Academy Award.

What kind of movie wins major awards, earns big box-office, and puts its writer-director-star in position to make a feature a year for the next 35 years? Here’s the catch: You can’t cram this gem into one easy category. Sure, it’s essentially a romantic comedy, and you can call it that without getting huge arguments. But the story of neurotic, selfish comedian Alvy Singer (Allen, of course) and his up-and-down affair with equally neurotic, selfish Midwesterner Annie Hall (Diane Keaton in a bravura, signature performance), is much more than your basic boy-girl three-act love story.

For starters, Annie Hall boasts the pre-eminent collection of memorable Allen one-liners. The film begins and ends with well-aged Borscht Belt jokes, and the intervening 93 minutes are packed with witticisms both classic and topical. Even better, his 1977 gags still ring true in the new century. Try this for a sample: … “the rest of the country looks upon New York like we’re left-wing, communist, Jewish, homosexual pornographers. I think of us as that sometimes and I live here.” That joke would go over great at a modern Tea Party convention, don’t you think?

And of course, there’s Annie, with her goofy outfits (allegedly wearing her own clothes and definitely kicking off a late-‘70s fashion trend), white-bread background and “la-di-da” speech patterns.  How about Alvy’s jaundiced view of Los Angeles? When Annie observes, “it’s so clean out here,” Alvy replies, “That’s because they don’t throw their garbage away, they turn it into television shows.” Is that still valid or what?

You also get a meditation novice who forgot his mantra (Jeff Goldblum in a one-line bit part),  a memorable sight gag about sneezing into party dust, and early screen appearances by, among others, Sigourney Weaver, Shelley Hack, Shelley Duvall, Paul Simon (in a minor role that propels a key plot point) and – in a cameo that sets a standard for comic creepiness – Christopher Walken as Annie’s troubled brother. The one-liners never let up, and the fantasy sequences (ghostly visits to the past, an animated scene, a fantasy vindication in a movie queue) keep the audience alert and amused.

But enough with the jokes. There’s so much more here – real humanity floats in this sea of glib observations. The very nature of romantic love is questioned, twisted, batted around, and then left up to the viewer to decipher. Because it lacks the traditional rom-com conclusion, this film set a new standard for the genre that gave us Doris Day-Rock Hudson cutesiness. Annie Hall is different because its cutting edge doesn’t carve into the heart of genuine feeling.

There’s even good music: Annie’s singing debut gives us the standards “Seems Like Old Times” and “It Had To Be You” (the latter song made even more of a classic when it came up in another grand comedy, When Harry Met Sally … ). It’s a wonder Keaton didn’t keep on singing in the rest of her films.

There’s more to enjoy, and I’m here to advise you that no matter how many times you’ve seen this movie, you’ll get more out of it by watching the new Blu-Ray edition. Details and clarity pop out.

Annie Hall is presented in its original aspect ratio of 1.85:1. The 1080p image is arrived at with an AVC MPEG-4 codec at an average 30 mbps. The Blu-Ray imagery is superbly sharp, especially compared to the old DVD release that we slapped on the screen for comparison. The colors are snappier, the edges more defined, the close-ups more natural.

The DTS-HD Master Audio 2.0 is a serviceable enough audio presentation. You can hear the dialog just fine, and the musical cues sound about how you would expect as much of it is source music. The mix respects the original material with no need at all to try to update what you hear outside of making it cleaner than it has ever been.

No, there aren’t any extras. Allen doesn’t do commentaries or show deleted scenes. There are no retrospective interviews with the principals – a sad sign of neglect. Just a trailer remains here.

As one who bought this film on VHS, laser disc and DVD, I’m delighted to have the chance to earn a Blu-Ray copy by sharing my love for this timeless masterpiece from a filmmaker who may not always be great, but who has remained steadfastly fascinating for four decades.