Posted in: Disc Reviews by Archive Authors on February 18th, 2012 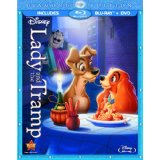 The yesteryears of Disney were full of classic movies from Aladdin to 101 Dalmations. Each of those films holds a special place in my heart due to its warmth and very colorful, cute story. Having never seen Lady and the Tramp before picking up this early copy, I didn’t know what to expect of the film. Many declare it to be one of Disney’s best, which is certainly a remark that is quite distinguished. Would Lady and the Tramp capture my emotions and heart like so many old, classic Disney films did years ago? Read on to find out.

The basic story to Lady and the Tramp is as follows. A man named Jim Dear gives his wife Darling a mysterious box for Christmas. Inside that box is the ever-so-cute little cocker spaniel puppy, which Darling decides to name Lady. Lady spends most of her period growing up with two neighborhood dogs, Trusty and Jock. One day a dog named Tramp walks over the railroad tracks. When Darling has a child, we are introduced to two super ugly and vicious cats, Si and Am, courtesy of Aunt Sarah. Due to these evil cats and the new baby, Lady winds up in the doghouse. What happens next is cinematic history: the spaghetti scene and the start of a romance between Lady and Tramp.

As per old classic Disney films, we are treated to a film full of lovely little tunes. I found myself rather enjoying the tune Bella Notte sung during the infamous spaghetti scene. While I didn’t enjoy a majority of the rest of the songs as I usually find myself doing with older Disney films, I still did find them a lot better than anything musical Disney has done in quite some time.

This is not your typical Disney film like 101 Dalmations where we had a dog driven story, but we still saw a lot from the human perspective. Lady and the Tramp is more focused on the adventure from the dogs’ point of view. And this is where the film’s charm and shine come through so easily. Lady and Tramp are so beautiful to look at (mostly due to the picture quality) that I found myself getting emotional in some scenes, finding myself amazed that I had never experienced the quality of this film before.

While Lady and the Tramp is not Disney’s best effort to date (I leave that with either The Little Mermaid or Beauty and the Beast), the film is still so simple and enjoyable that anyone can sit down and spend 75 minutes enjoying themselves. It astounds me that Disney was so good and talented some time ago, yet now churns out video sequel after video sequel. Hopefully Disney will return to the days of old as the films they made are classics, including Lady and the Tramp.

Lady and the Tramp is presented in its original aspect ratio of 1.55:1. The 1080p image is arrived at with an AVC MPEG-4 codec at an average 37 mbps. Disney hires the best of the best to restore their classics to take them to a new level. It is evidently clear that Disney has done this. The image is so beautiful to look at with sharp colors, absolutely no grain and zero edge enhancements. In short, this is one of the best transfers Disney has ever done.

The DTS-HD Master Audio 7.1 is just as spectacular. The real highlight of the track is, no real surprise, the musical performances, which sound lovely. Rear channels bring us colorful tunes while the center channel delivers simple dialog.

All of the DVD extras are here. These are the Blu-ray extras:

Second Screen: This Blu-ray exclusive allows you to play extra features on an Ipad or laptop and sync the features to the film on your Blu-ray player.

Diane Disney – Remembering Dad: (7:51) HD The daughter of Walt talks about her father. The piece focuses on the private apartment he kept above the fire station inside of Disneyworld.

Never Recorded Song: Well… if the song was never recorded, all you’d get is a blank space here, which at first it appears is what you get. They mean never before recorded song.

Lady and the Tramp is such a charmingly beautiful film to watch and to simply look at. Containing a sweet story, amazing picture, and fine audio, enough special features to last you plenty of quality time with the kids, this Blu-ray comes highly recommended for any age.