Posted in: Disc Reviews by Gino Sassani on February 18th, 2012 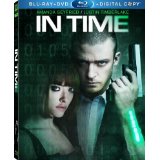 “I don’t have to worry about how it all happened. It is what it is. We’re genetically engineered to stop aging at 25. The trouble is, we live only one more year unless we can get more time. Time is now currency. We earn it. We spend it. The rich can live forever and the rest of us?”

Well…the rest of us lose a couple of hours by watching films with tremendous potential that end up leaving us disappointed and more than a little bit cheated. Hopefully, you haven’t yet taken the plunge and I’ve gotten to you In Time.

We’ve all heard it. Time is money. You might forgive me taking the cheap and easy pun. It’s not terribly original, I know. But after watching this film, I find my originality a bit stifled by a script that manages to cram just about every time pun or joke you can find into the hour and a half running time of the movie. So, if you find my remarks terribly unoriginal, wait until you spend some time with In Time.

You’ve already heard the setup in our intro quote here. Enter poor everyman Will Salas (Timberlake). He literally lives day to day. The amount of time you have remaining is displayed on your arm in glowing digital numbers. Salas, like most of the poor in this part of town, usually ends each day with less than another day of life. You see, you use time to buy everything from a cup of coffee which might run you 8 minutes to your rent which will run you a week or so. When you hit 25 you begin the process with a year to start with, but debts have caused Salas to use his year up in less than a week. His mother (Wilde) has just turned 50 and has very little time to spare.

One day Salas helps a stranger avoid getting killed in a bar. In return the guy slips him over a century of time while he sleeps, virtually committing suicide by running out his own clock. Now the Timekeepers (cops) are on the trail of what looks like a murder and time theft. Salas runs to one of the richer time zones where he meets heiress Sylvia Weiss (Seyfried). Her father owns the world’s biggest time bank and has literally millions of years. When Salas kidnaps the girl escaping, the spoiled rich girl turns Patty Hearst and the two end up in a kind of Bonnie & Clyde meets Robin Hood situation.

First there’s the cast. Justin Timberlake just couldn’t be worse. Each line is awkward, and he deadpans every scene. When he delivers the many groan-worthy time jokes, he pauses for effect. There’s an effect all right, but it’s not such a good one. Amanda Seyfried is actually pretty good as Sylvia, but she has to struggle with a bad hairpiece and even worse dialog. Olivia Wilde is terribly underused. She exits early, and that makes her the lucky one.

The worst sin committed here is the extreme heavy hand the film takes on the social comment. If you’ve watched the news at all you are familiar with the whole “occupy” movement. This film is an occupier’s wet dream. It’s fine to have a strong social message, but director/writer Andrew Niccol just doesn’t trust us to get it. He pushes it in our face at every turn. We’re not that stupid, and I sure would have appreciated just a little credit. In the end he dilutes his message by pushing too hard. He’ll lose you, as well.

In Time is presented in its original aspect ratio of 2.35:1. The 1080p image is arrived at with an AVC MPEG-4 codec at an average 35 mbps. The film is glossy and looks quite slick. It almost looks too good when you consider the message here.

The DTS-HD Master Audio 5.1 is almost too powerful. The sub pushes through relentlessly just like the message. The music is harsh, but that is the mood that was intended here. Dialog is clear, and the surrounds often provide some nice ear candy.

The Minutes: (16:35) A mockumentary that attempts to explain the science that led to the situation.

The film had a ton of potential. I was very much looking forward to seeing it. I tried to score an advanced screening and was bummed when I could not. My, how times have changed. Fox sent me a copy, and I’m suddenly trying to remember what I did instead of attend the screening. Whatever it was, it was time better spent. This film loses its way at almost every turn. It certainly has a strong message, but I have one for Andrew Niccol: “Don’t waste my time!”

Gino Sassani is a member of the Southeastern Film Critic's Association (SEFCA). He is a film and television critic based in Tampa, Florida. He's also the Senior Editor here at Upcomingdiscs. Gino started reviewing films in the early 1990's as a segment of his local television show Focus. He's an award-winning recording artist for Omega Records. Gino is currently working on his 8th album Merchants & Mercenaries. Gino took over Upcomingdiscs Dec 1, 2008. He works out of a home theater he calls The Reel World. Favorite films: The Godfather, The Godfather Part II, The Body Snatcher (Val Lewton film with Karloff and Lugosi, not the pod people film), Unforgiven, Gladiator, The Lion King, Jaws, Son Of Frankenstein, The Good, The Bad And The Ugly, and Monsters, Inc.
The Dead (Blu-ray) Lady and the Tramp (Diamond Edition Blu-ray)