Posted in: Disc Reviews by Michael Durr on February 19th, 2012 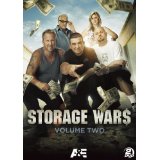 Make no bones about it, Storage Wars is one of my favorite television shows of all time. Most people would refer to it as a modern day treasure hunt, but when it comes down to it, the cast of characters is what keeps me watching. Of course, the “what is behind Storage Locker #1?” is going to lure me to the dance though. Needless to say I was pretty excited to see a second volume of Storage Wars hit my door. Let us see what the boys (and girl) find this time around.

Since Storage Wars has not received a review on this site as of yet (Season One is readily available), I thought I would take some time and share the basics. Ever rent a storage locker? Sure, most of us have. We tend to throw just about everything in there, from absolute crap we can not bear to get rid of to perhaps something valuable that we are saving for a rainy day. Well, just like anything else that costs money, some people decide not to pay it. Well, unfortunately the owners have to do something about it to recoup their losses. Auction it off to the highest bidder.

That is where our story starts. People with an interest in auctions, people who hope to find treasure or thrift store owners show up at these events and purchase a locker in cash as long as they haul out the stuff in a reasonable timeframe. The thrift store owners probably benefit the most out of this exchange as they get the merchandise at a decent price they can sell for profit and they get perhaps more importantly, variety. Variety is of course important to keep the customers coming back. That leads us to our main characters.

The focus of the show is on four people, or rather four groups of people. We have Dave Hester (who used to run two thrift stores but now runs an auction business) who presides as the villain of the group. He will run up the bids or bid on a locker he has no interest in. He does this to squeeze a little more cash out of the other participants so that he can get the lockers he is interested in at the best price. But while this is a sound strategy, he does it so obnoxiously that it often infuriates others.

Barry Weiss has the biggest bankroll of the group as for years he operated a very successful produce company. Now retired, he spends his time looking for a few collectibles in these storage locker auctions. He also is probably the zaniest character in the show, usually showing up in one of his classic cars and using obscure methods to determine if a locker has any value. Barry is indeed a cool cat.

Darrell Sheets (with son, Brandon) is the storage locker veteran of the group. He has been doing this occupation for years. Most of the lockers over the years he merely turns around and sells before he even picks over it. Why? Because he is primarily looking for the “Wow” factor. The big hit as it were. For show purposes, he usually always looks over his locker and puts the valuables up on his website (darrellgambler.com) but his business survives on low overhead and high value.

Our final group is the married team of Jarrod Schulz and Brandi Passante. They run a thrift store named “Now and Then Second Hand Store” and are still relatively new to this game of storage auctions. This group really emerges during the second volume as a force to be reckoned with. The gaining experience shows and their bankroll builds as they know which auctions to go after. Their store recently expanded to a new wing and Jarrod is now trying his hand at his own clothing line.

Now that we have dealt with the characters, we are ready to dive into the show. The second volume ( a little disappointed that A&E decided to go the volume route when the first season was released by itself) is comprised of fourteen episodes. Most of these shows I had already seen but it was good to revisit them and relive some of the magic. The very first episode, Hang Em High Desert is a favorite of mine as we get to see Barry find some really interesting guitars and get them checked out by an even more interesting “guitar” person.

Other episodes like Buyers on the Storm show off Hester’s keen eye when he scores a lick on some vending machines. In this episode, Jarrod also learns a thing or two about cameras. In Santa Ana Street Fight, Darrell finds a frozen treat and Jarrod plays around with a foosball find and tickles some ivories. Speaking of Darrell, he tries out a new method of buying units in Unclaimed Baggage. Barry also finds some very expensive wood in this fascinating episode.

Perhaps my favorite episode this season was Pay the Lady though. In it, assistant auctioneer Laura Dotson is running the show (since her husband Dan is not able to attend). But in it, we also get to see Brandi go out a bit on her own (for a present to Jarrod) as well as Darrell’s son, Brandon who picks up his own locker. In it he finds some oily shoes among other valuables. It proves that the show is not always just about Hester, Barry, Darrell or Jarrod. It is also about characters like Brandi or Brandon who are coming into their own and proving to be a force in the storage auction business.

These episodes even bring in a new character (for all of three episodes), Mr. Mark Balelo, referred to as “Rico Suave”. His MO seems to be fairly simple and that is to win each locker, even if he has to overbid for it. He tends to drive up the price almost to the point where it is not even economical for anybody else to bid on it. But as we see in Enemy of the Enemy, Fire in the Hole and San Burrito, there are still reasonable treasures to be found.

As mentioned in the beginning though, the characters are what bring this show such success. From Barry’s jokes (and unique ways of bidding) to Hester’s smugness (and one upping the competition) to Brandi & Jarrod’s playful stabs at each other to Darrell’s wow factor (and beating Hester at his own game when he wants to), we really start to crave information. That information could be what else is in the locker, it could be more information about their lives. The viewer wants it all and such we end up tuning each week to find out.

The only bad part about this show is probably the replay value. As I mentioned earlier, I have seen most of these episodes before I received this set. While I did enjoy going back through these episodes to find a couple of new nuggets, there is not much that will keep you coming back to watch it again. I wonder if they have thought about (when they bring these shows to dvd) a pop up video version of the show. Meaning, that along the bottom we could get cool facts about the characters or perhaps find out what they were really able to sell a piece of expensive equipment for in their shops. I think that would help sales of these dvd sets.

The video is in 1.78:1 anamorphic widescreen presentation. This show is filmed in High definition and does a great job of providing quality video. Flesh tones are highly accurate and despite the fact that they might be filming in a dark storage locker or a claustrophobic expert’s shop, it looks relatively the same. The viewer is able to see lots of detail and we might spend time looking at other items in the background and not necessarily what is being discussed in front of us. Entertaining video to say the least.

For the audio portion, we get a 2.0 Dolby Digital Stereo track in English. The audio track is a little less desirable. Dialog is clear and one can appreciate this fact if they check out the two auctioneers, Dan and Laura. One can actually understand what they are saying, for the most part. None of the characters in the show sound muffled even when they are digging in the back of a storage closet. Sound effects are few and if they do appear they stay in the center channel. English and Spanish subtitles are provided.

The last episode of Season Two showed up on January 24, 2012. It might also be the last time we see Dave Hester on the show as he is not happy with the way the show is treating him. Hester’s character to me is seen as a way to get casual fans to watch the show. He is there for drama. Hardcore fans like myself enjoy the Barrys, Darrells, and Brandi/Jarrods but he would be hard to lose. But in the same breath, if he does leave, I will not miss him that much as long as the show continues to thrive.

Volume 2 is a good set to have if you own the first as you get to see the development of many of these characters as they get more experienced in these auctions. The only hurting factor is that after you watch them once, maybe twice that this will possibly sit in its own Storage locker. I will say it again, A&E really needs to pack a few extras in these sets like a pop up facts, commentaries or interviews to entice the viewer to come back again and again. I honestly love this show and would love to learn even more about what goes on before, during and after these auctions take place. As such, this gets an easy recommendation where you really learn that “Money Owns this Town”.

Michael Durr has been reviewing movies for the better part of fifteen years now. He primarily enjoys thrillers, sci-fi, animation and even a little courtroom drama. His favorite films include Escape from New York, the Goonies and anything with Alyssa Milano. When he’s not praising Kurt Russell as the greatest actor of our time or scratching his head over a David Lynch flick, he’s spending time at home in Texas with his lovely wife, Lori and his amazing son. How they put up with him is a mystery, but even Basil Rathbone doesn’t have the time to solve that one.
Lady and the Tramp (Diamond Edition Blu-ray) The Fatboy Chronicles