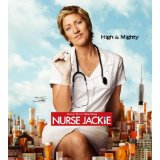 “At this very moment, I have no desire to stab you in the neck.”

Between Weeds and Nurse Jackie, Showtime has the corner on shows about drugged up, ethically challenged women. The great Edie Falco somehow keeps Nurse Jackie relatable even though she is an unrepentant drug addict, thief and manipulative narcissist. It doesn’t hurt being surrounded by such a smart supporting cast and given lines that crackle with poignancy and humor.

Season Two ended with Jackie’s world crashing down around her. Jackie (Falco), a veteran ER nurse at Manhattan’s All Saints’ Hospital, is hooked on painkillers and recreational drugs. We’re talking getting high in the morning and maintaining the buzz all day and night kind of addict. Her bar-owner husband Kevin (Dominic Fumusa) and impossibly cool best friend, and former enabler, Dr. Eleanor O’Hara (Eve Best), have uncovered Jackie’s secret life and staged a failed intervention.  Jackie refuses to come clean, and both Kevin and O’Hare feel so betrayed it threatens to end both her marriage and her friendship.

Then there’s the burgeoning friendship between Kevin and Jackie’s former adulterous lover, the shamelessly manipulated pharmacist Eddie (Paul Schulze). Jackie spent the first season leading Eddie on, plying him with sex and convincing him she was single and available in order to supply her addiction. When Eddie discovered her secret family, something snapped in him and he began stalking her husband. Every conversation bristles with the tense possibility that Eddie might confess the truth.

Back in All Saints, Dr. Cooper (Peter Facinelli), continues to allow his socially inept ego to polarize his coworkers. Hospital administrator Gloria Akalitus (Anna Deavere Smith), obsesses over getting a visit from the First Lady Michelle Obama and fights to stop the Catholic Church from deconsecrating the hospital’s chapel. Goofy nurse Zoey (Merritt Wever) struggles in her hyper -awkward relationship with ambulance driver Lenny (Lenny Jacobson).

Season Two did a great job amping up the suspense and dread as Jackie’s addiction and choices spiral out of control, setting up what seemed Jackie’s inevitable destruction; yet somehow she still dodges all responsibility. Season Three felt a little anticlimactic. Jackie weebles and wobbles, but she won’t fall down. It is a testament to Edie Falco’s talent and charisma that we don’t find ourselves hating Jackie. There really seems so little to like, but then, when the shit has hit the fan and the ER is in the weeds, Jackie rises to the occasion with inspiring leadership, effortless compassion, and common-sense healing. Yes, Jackie might be high, but she is indeed mighty.

Nurse Jackie: Season Three is presented with an AVC encoded 1080p transfer in 1.78:1 running an average of 19 Mbps. Other than the hospital scenes bathed in blues and greens of harsh fluorescent lights, the color and detail is excellent. All exterior scenes boast a rich palette. Blacks are nuanced and rich even in low light, shadows are stable, and the skin tones (when not in the hospital) are natural. Close-ups are rich with detail and clarity.

The DTS-HD Master Audio 7.1 audio track is lively but not very immersive, except in some of the hospital interior scenes with the madness of the ER and whir of medical equipment. Music pops with full LFE bass response. Dialog is clear and well captured. Considering this is a quiet, dialog-centric show, there really isn’t a lot of room for a showy mix.

I really enjoy this style of dramedy; it reminds me of the headier days of Saint Elsewhere. I just feel it is starting to run in place a bit. How long can Jackie baffle everyone with bullshit before the roof comes down on her? Something needs to move the story forward. Jackie has dug herself in so deep it seems could only end only tragically, but that just wouldn’t make for good comedy. Funny, moving, shocking, and often ethically frustrating, Nurse Jackie: Season Three keeps the quality up even if it doesn’t really take us anywhere new.

“If you go into cardiac arrest, I will kill you.”

Puss In Boots (Blu-ray) The Way