Posted in: Disc Reviews by Gino Sassani on March 2nd, 2012 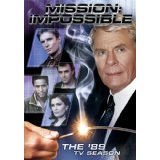 “Your mission, should you decide to accept it…”

Those words have certainly been a part of the American pop culture for almost 50 years. It all started with the Desilu television series that hit the airwaves in 1966. That first year is probably unfamiliar to most of us. It was in black & white and starred Steven Hill as the leader of the Impossible Mission Force. A year later the show jumped to color and Peter Graves took over the team as the indomitable Jim Phelps. The show lasted a good seven seasons. The Impossible Mission Force was a black-ops team that worked under the “secretary” who would disavow their mission should any of the team be caught or killed. The show had a pretty good run before ending in 1973. Gone, but never forgotten.

The most popular reincarnation of the franchise began with the Tom Cruise feature film in 1996, thirty years after the original series began. The film took the franchise into a new high-tech world and added a good dose of modern action to the formula. The result was a series of sequels, including the forthcoming Mission Impossible: Ghost Protocol. What many of you might not be aware of is the revival television series that lasted for two seasons starting in 1988. For the first time, those episodes are now becoming available on DVD.

The new show acknowledges the time since the first series ended. In the pilot a retired Jim Phelps (Graves) is called back into action when the current head of the Impossible Mission Force is killed. He assembles a brand new team and stays on after the case to lead them. The new team consisted of the same kind of talents that fans will remember from the original teams. To help make that transition even more powerful, we get Grant Collier, the technology expert on the team. Grant is played by Phil Morris, who happens to be the son of Greg Morris. Fans recall that Greg Morris played Barney Collier, who served the same function on that show. Grant is the son of that character. Thaao Penghlis played Nicholas Black. Black was the master of disguise and masks. That role, of course, had a few characters during the original run including one played by Leonard Nimoy. The most famous of those characters was played by Martin Landau. Anthony Hamilton plays Max Harte. Harte is the tactics and weapons expert on the team. Each IMF team had a young woman who added some glam to the team, and that role fell first to Terry Markwell who played Casey Randall and after 11 episodes V’s Jane Badler who played Shannon Reed. Markwell left the show quickly over disputes on her character’s screentime. Her ego was fans’ gain as Badler was a much better actress and character. In another nod to the original series Bob Johnson returned as the voice on the mission discs, which replaced tapes that would still self-destruct after five seconds.

The missions were very much the same kinds of things. In fact, the show began during the writers’ strike of 1988. That meant that many of these episodes were recycled stories from the original show. Many were exact copies. That ability might have been a big help in getting the series on the air that year. The stories were alike, but sadly the cast never did have the chemistry and dynamic of the earlier series. Penghlis and Hamilton are particularly weak in the acting department and have about as much charisma as a stale tuna sandwich. Actually, that’s not quite fair. I’ve seen some impressive stale tuna sandwiches in my time.

The second season featured much the same kind of missions. It began with a two-part episode called The Golden Serpent which included another guest appearance by the original show stat Greg Morris back as Barney. He’s been working inside a dangerous organization that has already killed one other agent. The team must complete the killed agent’s mission and get Barney safely out of the operation. The rest of the missions include protecting a pro-West princess, stopping a neo-Nazi group from picking up where Hitler left off, and investigating a mummy complete with its own Egyptian curse.

Each episode is presented in its original full-frame broadcast aspect ratio. These images look really bad. There is a lot of shimmer, and compression artifact dominates the video presentation. To make it worse, it appears these might even be dubs from tape versions. The quality suffers in every way imaginable.

The Dolby Digital 2.0 track doesn’t do anything more than serve the dialog. Music gets distorted in places.

I’m sure that the recent release of Ghost Protocol has a little something to do with this final season of the series finding its way to DVD. Whatever the reason, your series is now complete and you can finally call it “case closed”.

Gino Sassani is a member of the Southeastern Film Critic's Association (SEFCA). He is a film and television critic based in Tampa, Florida. He's also the Senior Editor here at Upcomingdiscs. Gino started reviewing films in the early 1990's as a segment of his local television show Focus. He's an award-winning recording artist for Omega Records. Gino is currently working on his 8th album Merchants & Mercenaries. Gino took over Upcomingdiscs Dec 1, 2008. He works out of a home theater he calls The Reel World. Favorite films: The Godfather, The Godfather Part II, The Body Snatcher (Val Lewton film with Karloff and Lugosi, not the pod people film), Unforgiven, Gladiator, The Lion King, Jaws, Son Of Frankenstein, The Good, The Bad And The Ugly, and Monsters, Inc.
Thurgood (Blu-ray) Dr. Seuss’ The Lorax