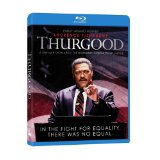 “As a boy, I came to understand that two things marked my family: distinctive names and extreme stubbornness.”

In fact, it was Thurgood Marshall’s “extreme stubbornness” in the face of racial inequality that led to his name becoming synonymous with the civil rights movement and to his 1967 appointment as the United States Supreme Court’s first African-American justice. Marshall’s remarkable life story is told in Thurgood, a sensational one-man show starring Laurence Fishburne that previously aired on HBO and was filmed before a live audience at the Kennedy Center’s Eisenhower Theater in Washington, D.C.

Now, when you’re talking about a one-man show, you obviously need a performer — and a subject — compelling enough to hold your attention for an extended period of time. (In the case of Thurgood, that would be 105 minutes.) We already covered why Marshall fits that bill, but Fishburne has never been better. The movie — in essence, a filmed stage production — opens with extreme close-up shots of Fishburne quite literally becoming Marshall as he slips on the man’s distinctive horn-rimmed glasses and affixes a pair of patriotic cuff links. Once he steps on stage, Fishburne comes alive (certainly more alive than he ever was during his recent, dreary stint on CSI), gradually adjusting his gait from his portrayal of Marshall as a lively young man to a more deliberate shuffle in the man’s later years, and altering his own familiar, booming baritone to include touches of weariness and mischief.

That spirit of mischief is the secret weapon and unexpected delight of Thurgood. When you glance at the Blu-ray cover, you’ll find Fishburne, in character, sternly looking back at you while standing behind a podium. He’s in the middle of a sentence that is certainly part of a brilliant legal argument. In other words, there’s little suggest just how damn funny Thurgood is. (And that doesn’t even include the moment at the 34-minute mark when Fishburne gently scolds a group of late-comers in the audience without ever breaking character.) There is a great amount of humor, but the material never become jokey.

George Stevens Jr. has written his play in a way that positions Marshall as the world’s greatest and most over-qualified guest lecturer at your college. At the beginning of the production, Marshall returns to Howard University — where he attended law school — marvels at how much it has changed and proceeds to tell his own life story, which dovetails nicely with the history of the U.S. civil rights movement in the 20th century. (Largely due, it should be noted, to Marshall’s direct involvement in several landmark decisions, including Brown v. Board of Education.) In fact, if there is one oversight in Thurgood, it’s that the film doesn’t delve very deeply into its subject’s personal life. Although Marshall speaks highly of his parents and wives — and recounts several colorful anecdotes involving assorted racists or high-ranking officials — they are usually told as somewhat of a footnote to a bigger court case or professional accomplishment. Then again, the focus of this piece is the law and, as Howard University Law School Dean Charles Hamilton Houston told Marshall when the latter was a law student, “The law is a weapon, if you know how to use it.”

Besides, the great far outweighs the less-great. Director Michael Stevens doesn’t run from the fact that this is a filmed stage production and, instead, focuses his energy on keeping things interesting from a visual standpoint. By using clever lighting cues — I particularly loved the way a U.S. Supreme Court argument was presented — and understated background visuals, the director finds a way to enhance the material without every drawing attention away from Fishburne/Marshall.

Thurgood is presented in an aspect ratio of 1.78:1. The 1080p image is arrived at with an AVC MPEG-4 codec at an average of 27 mbps. Fishburne’s striking on-stage presence comes through in a crystal-clear manner — at times, it feels like you could be watching him in person — and the subtle background images don’t ever get lost in the shuffle. The video is, perhaps, too good, because the edges of Fishburne’s hairpiece were occasionally visible in close-ups.

The DTS-HD Master Audio Track 5.1 track does its primary job — delivering Marshall’s words loudly and clearly — in a splendid way. The production doesn’t feature much in the way of sound beyond Fishburne’s voice, but the impressive roars of applause and outbursts of laughter both add to the sensation that you’re sitting in the audience.

Despite not having any special features, this Blu-ray is a must-watch. Fishburne’s excellent performance, along with some inventive writing an directing, combine to basically turn Thurgood Marshall into your favorite college professor. Thurgood is a totally engaging portrait of a legendary American that also doubles as a lively and essential history lesson. The Blu-ray helps bring all those things to life in a surprisingly thrilling manner.