Posted in: Disc Reviews by William O'Donnell on March 8th, 2012 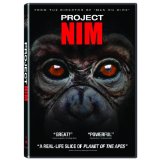 An infant chimp is taken out of his natural environment to be raised like a human by a family of curious, rich folk. Upon learning that this chimp, now named Nim, is capable of learning sign language, this family turns to professional educators to research and experiment with this concept further.

I promise to give praise to the filmmakers handling adept handling of their craft later in my review, but I cannot discuss the contents of this film without injecting my own personal opinion because this film, much to it’s credit, stirred a very visceral reaction from me. The family that first adopted (adopted being an extremely delicate term, as many could easily argue that “nabbed” or “stole” would suite their actions better) Nim were a wealthy family, said wealth stemming partly from the father’s success as a poet. They named him Nim Chimpsky (as a parody of Noam Chomsky, who theorized that language is inherit only in humans, and Nim was their attempt to disprove said thesis). This family dressed Nim in children’s clothes and eventually tried communicating with it on a person to person level using American sign language. This experiment, albeit spurred some interesting results once true experts from Columbia University became involved, was born out of ignorance and arrogance. This family did what they did because they had the financial means to offer themselves the opportunity, without considering the unnaturalness of it. By unnatural I don’t mean that their antithesis to Chomsky’s idea is wrong or implausible. What I mean is the manner by which this animal was taken out of its mother (granted, not born in the wild but a facility) and treated like a human.

As mentioned before, Nim was indeed taken away from this family that first adopted him. Nim’s journey thereafter went from a research facility, to a pharmaceutical animal testing lab, and finally being adopted by an animal ranch where he was kept in seclusion from other animals and human visitors (only his keepers interacted with him) for around 10 years before major changes allowed other chimp companions to move in, as well as outside visitors. Along the way, Nim made allies in some folks who championed the effort to find a fair living environment for Nim,that was not simply a zoo or lab, while still learning from him.

Most valiant in these efforts was a man Bob Ingersoll. Bob never ceased to ensure Nim would have a better standard of living, and his efforts were rewarded by not only his success in fainlly arranging a situation where Nim could be content, but also by the undying friendship he had with this animal. A perfect contrast is made in the film when you see the joy and interaction between Bob and Nim upon their first reunion after many years, versus hearing the horror story of when the mother of that first family who adopted Nim as an experiment visited Nim in his cage and was viciously assaulted by the chimp.

This film is peppered with recent interviews with many of the parties involved, reflecting on the events during the 70s and 80s (when Nim was adopted). In said interviews, the aforementioned contrast between Nim’s interactions with Bob vs. the family that adopted him is further detailed as Bob explains his compassion for Nim while the mother of this rich, ‘hippy’ family acts shocked when recalling when she was attacked by Nim; a testament to her perpetual ignorance of what she and her family did to this animal.

The interviews are very composed and formal. This film is not just found footage of Nim, but rooted in the voices of those closest to this “Project” as they recall it in thorough detail. We are offered the story in retrospect, but not everyone comes to a complete consensus, in their hindsight, about who was wrong or right in their actions and decisions. This ensures that the story can still be told chronologically without having contradictions masque the initial intentions of all the parties involved, again, be they wrong or right.

Widescreen 1.78:1. The picture quality is admirably clean. Obviously, archived or found footage shot on Super 8 or other inferior cameras will be grainy, but everything is delivered with the best possible clarity.

English Dolby Digital EX 5.1. All sounds are balanced very well in all of the speakers. The voices telling their stories are clear in the front speakers, and the charming score by Dickon Hinchliffe resonates well in the surrounding ones.

Subtitles available in English and Spanish.

Audio Commentary by Director James Marsh: Marsh does well to detail the different people and bits of information gathered to tell this harrowing story.

Bob’s Journey: Bob Ingersoll, the integral ally of Nim, travels with the film as it tours various film festivals and events. Plus, a special visitation to a sophisticated animal refuge where we see Bob interacting with chimps who have been saved at a more vital, early time in their lives.

Making Nim: Resembled the main feature in composition to a tee, this is an in-depth look at all the different levels of composition that went into the creation of this Documentary. The use of dramatic reenactment is defended. Every person who was key to creating this film get ample time to have their say in this mildly self-congratulatory mini-film.

Trailers: For this film and others by Lion’s Gate.

This true story, when told with a great amount of proper research, is naturally engrossing and fascinating. This fascination could stem from the joy of seeing those try to save Nim, and relate to him on a more chimp level, as opposed to human, to the disturbance of witnessing the sheer arrogance conveyed by certain people who treated him like a human and reacted negatively when Nim would retaliate as a beast.

Gurozuka Queen – Days of Our Lives