Posted in: Disc Reviews by William O'Donnell on March 28th, 2012 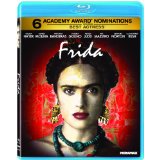 Frida Kahlo’s life was tragic, romantic, epic, and inspiring. This film takes on the immense challenge of telling the story of such a complex life in the time frame of a stand-alone feature film. Frida is about art just as much as it is about an artist. Often stylized, but never unapproachable, Frida is a rare success by the way it managed to capture and display a part of Frida Kahlo’s artistic soul.

Director Julie Taymor is widely known for her stylized approach to any production, be it on film (Titus, Across the Universe) or on stage (Lion King, Spiderman: Turn off the Dark). It is no small wonder that Taymor expresses her own artistic flair through her direction without comprising the work of her subject. Taymor uses dreams as her platform to inject the strangest visuals that are not the direct work of Frida. There is even one scene that is not the composition of Taymor or Frida, but the a dream sequence inspired by Mexico’s day of the dead, created by the enigmatic animation duo, the Brothers Quay. As I suggested, the injection of other artist’s unique style and creations into a film about an artist is not as disruptive as one may imagine. Both Taymor and the Brothers Quay honour Frida’s life and work with their own contributions. Neither attempt to mimic Frida, save for one painting at the very end, but rather, they include something about Frida’s life that she herself may not have expressed in her work. That is to say, not explicitly in any particular piece.

Frida’s work is very autobiographical, and said work does indeed play an integral part in this film. Beyond being admired within the film, Frida’s creations are used to bookmark and chapterize crucial moments in her life. Those that know Frida’s life and work extremely well can detect how much time passes between each event/painting. It is an interesting, and in my view positive, decision to never say how much time passes between or during any portion of the film. We are never told just how many months and years pass by while Frida is confined to her bed, between her affairs, or the duration of her marriage. This helps us experience these moments as the emotional, moving events they are, and not just as statistical curiosities.

The nearly life-long romance between Frida and her mentor/sometime husband Diego Rivera is the chaotic thread that runs the length of Frida’s entire creative career. There is an endless amount of speculation that can go into the strange relationship, and it’s nearly countless checkpoints of infidelity. For the audience to avoid being too lost in said speculation and the inevitable debates that this film instigates in regards to how right and/or wrong these two were for each other, the performances of the actors has to succeed in capturing the fiery emotions and strange charisma that they both have. Salma Hayek as Frida and Alfred Molina as Diego seems like the sort of perfect casting that could never occur a second time. These two deliver performances that stand alone as wonderful, but balance together even better as a pair. Hayek perfectly catches the strength that comes only through surviving great pain and strife with frightening authenticity. Molina is unapologetic in both his slimy moments, and his boyish charm. Both are winners that carry a film that could have possibly walked on its own anyhow.

1080p Widescreen 1.78:1. This film is such a visual feast, it is truly a shame that a few of the interior shots are fuzzy. The most vibrant of the visuals still pop but this film should be all the more pristine in Blu Ray. In fact, the less than stellar Video quality is about the only thing this release is lacking.

English 5.1 DTS-HD Master Audio. This film is undeniably more about the visuals than the audio, and yet this film is loaded with wonderful songs, score and effects. All are well mixed and sound great, with lots of clarity.

Subtitles in English and Spanish.

Conversation with Salma Hayek: This is a nearly 40-minute long, one-sided interview with the lead actress. Salma is a passionate person when she speaks, and said passion is all the more apparent when she speaks of Frida. We are privy to her strong connection and subsequent reaction to the film, as well as some interesting stories, including a tense one about Frida’s family reaction (positively) to the film.

Audio Commentary by Julie Taymor: A very informative commentary track by a director who recalls a ton about this film. Very much worthwhile for anyone wanting to delve deeper into this film’s creation, and perhaps understand certain parts all the better (I know I did).

AFI Julie Taymor interview: Roughly half and hour, we get a rather informative Q&A session with the film’s director. Head #2 of the proverbial Hyrda that is Julie Taymor;s featruettes on this disc, explaining her work.

Bill Moyers’ Julie Taymor Interview: Head #3 of the beast that contains many redundancies for those who have already listened to the commentary track and the first interview.

Chavela Vargas Interview: This popular Mexican singer appeared in the film during a moving scene where we see the death of Leo Trotsky. Here she offers stories about her own life, her meetings with the real life Diego and Frida, and her contribution to the fil, as interviewed by the film’s musical composer, Elliot Goldenthal.

The Voice of Lila Downs: The creators of the this film were fans of Downs’ voice and placed her into some excellent scenes in the film. Her voice is indeed soaring and soulful. This is a decent featurette.

The vision of Frida with Rogrigo Prieto and Julie Taymor: These two comment on the sets, and the lengths they went to be historically accurate and vibrant.

The Design of Frida with Felipe Fernandez: Some of the most crucial elements of the film are touched on in this feature. The art of Frida and its influence on the mise en scene is a marriage that makes this film what it is.

The Music of Frida with Elliot Goldenthal & Salma Hayek: Salma interviews Elliot about his vast knowledge of Latin artists and how he selected music for this film. Fans should truly enjoy this segment as it will help you appreciate both the film and its creators a bit more.

Salma’s Recording Session: For the soundtrack, Salma surprises Taymor and Goldenthal with her untrained yet excellent singing voice. She has some wine and belts out the song in a living room. Charming feature.

Bringing Frida Kahlo’s Life and Art to Film: A Walk through the Real Life Locations: The sets, and how they replicate the original locations, are explained.

Portrait of an Artist: a lighter piece that covers details of the film, that was probably made for TV. Included simply because it exists.

“The Brothers Quay”: A very short bit of interview with the creators of some of the stranger animations you may see, and the dream sequence I touched on in my review above.

“Amoeba Proteus”: An effects duo explains some of the stylish transitions that are in the film. Can only add respect to the artistry placed into the film production…so long as you’re a little bit versed in effects or computer art terms.

This film is as visually sensation and sensual as Frida and her work. Ultimately, it is a love story. Frida’s highest and lowest points came from her passion and her trials with love. This film is reritable feast to behold.

For further reading here is a previous review of this film: