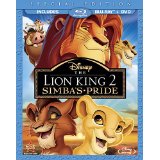 Well… not exactly. The Lion King began with The Circle Of Life and a newborn prince to the royalty of Pride Rock. That prince was Simba, and we all know by now how that ended up. The circle of life continues in The Lion King 2: Simba’s Pride. Of course, it’s not really the second Lion King film since the first sequel was cleverly called The Lion King 1 1/2 and pretty much covered the events of the first film from a different perspective. Now we get down to the real ongoing events, and once again a child to the Pride Rock royal couple is being presented to the kingdom. This time it’s a princess, and her name is Kiara, voiced by Neve Campbell.

Kiara has many of the same troubles that Simba (Broderick) had at that age. She’s restless to prove herself and experience the world beyond the protection of her two royal babysitters, yes, it’s Pumba (Sabella) and Timon (Lane). She slips the duo and meets Kovu (Marsden) who was the adopted son of the defeated and departed Scar. Kovu is defended by Scar’s mate Zira (Pleshette) who intends to use the young lion to seek her vengeance on Simba and the other lions at Pride Rock. Of course, the two fall in love, and Simba is just as unhappy as Zira about the union. Could it all be a ruse and part of the revenge plot?

There’s more than a little Romeo and Juliet to be found in this story, although without the rather tragic outcome for the forbidden lovers. It answers the questions of what became of Scar’s followers and gives us a quite natural sequel to the events of the first two films.

There are new songs, but none of them live up to the Tim Rice and Elton John material of the original film. They aren’t really bad tunes, but they are instantly forgettable. That might be a good thing if you have a young one who enjoys singing his favorite animation songs over and over again. They basically move the story and attempt to continue the musical traditions of the first film. Direct-to-sequel films have to cost a lot less money, and corners do need to be cut. I’m sure that the likes of Tim Rice and Elton John don’t work cheap. Fortunately, that’s the only place that real cost-cutting is to be found.

Like on the first direct to video sequel Disney retained much of the original voice cast on this one. That means a return by Matthew Broderick, Moira Kelly, Nathan Lane, Ernie Sabella and even James Earl Jones in a few short bits with the spirit of Mufasa. Even Disney staple Jim Cummings returns to do some of the small parts. The voice cast gets stronger with the addition of even more A-list voices for the new parts that include Neve Campbell, Andy Dick, Jason Marsden and Suzanne Pleshette.

Again, the animation is a cut above the usual direct to video stuff we’re used to. The animation team has begun to use more computer work, but the hand-drawn tradition remains, and at a respectable frame rate. The end result is a worthy addition to the Lion King franchise and a close of that film’s trilogy. You can have all three on Blu-ray now. Not a bad deal at all.

Lion King 2 is presented in its original aspect ratio of 1.66:1. The 1080p image is arrived at with an AVC MPEG-4 codec at an average 30 mbps. Colors are bright and cheerful. The high-definition image presentation offers a sharp and clean image. There is still not a lot of texture going on here, but detail remains high. Black levels are more noticeable on this film and stand out.

The DTS-HD Master Audio 5.1 is not what I would call dynamic. The music carries fine, and you can hear the dialog perfectly. It’s actually not as nice of a surround experience as the previous sequel was.

Timon And Pumba’s Insectapedia: (5:30) HD Another nature film from the duo, this time showing some of the insects they love to eat.

One By One: (5:42) SD A musical animated short about kids and kites.

Timon And Pumba Find Out Why: (7:35) SD This collection of short features has the duo answer some science questions like how airplanes fly or why is there lightening. There are five with a handy play-all option.

Proud Of Simba’s Pride: (6:46) SD This is a very short making-of feature. You meet the cast and crew.

Music Video: (4:33) Love Will Find A Way with Lenny Lattimore and Heather Heodley.

It doesn’t look like Disney has any plans for future Lion King projects. Timon and Pumba live on in television and shorts, but there appears to be a feeling that the story has had a fitting closure with this film from 1998. That may appear to be sad news for fans, but there is a silver lining here. At some point the continuation of the franchise with the same quality standards wasn’t going to work any longer. It would be inevitable that new voices would have to be used and the animation simplified. It’s best to have three quality films than many more cheap knock-offs. Appreciate it for what it is. “This one’s just for fun.”

Gino Sassani is a member of the Southeastern Film Critic's Association (SEFCA). He is a film and television critic based in Tampa, Florida. He's also the Senior Editor here at Upcomingdiscs. Gino started reviewing films in the early 1990's as a segment of his local television show Focus. He's an award-winning recording artist for Omega Records. Gino is currently working on his 8th album Merchants & Mercenaries. Gino took over Upcomingdiscs Dec 1, 2008. He works out of a home theater he calls The Reel World. Favorite films: The Godfather, The Godfather Part II, The Body Snatcher (Val Lewton film with Karloff and Lugosi, not the pod people film), Unforgiven, Gladiator, The Lion King, Jaws, Son Of Frankenstein, The Good, The Bad And The Ugly, and Monsters, Inc.
The Lion King 1 1/2 (Blu-ray) Wrath Of The Titans