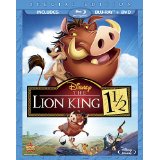 “We’re going way back to before the beginning…”

In 1994 Disney’s second golden age climaxed with, perhaps, their greatest animated film of all time. The Lion King broke every animation record, and those records still stand today. The film appealed to old and young alike and told a compelling story that included some rather memorable songs from Tim Rice and Elton John. It was never a question of if there would be a sequel, but merely a question of when and in what form that follow-up would take. There was simply too much money at stake for there to be any other outcome.

The film takes a pretty clever and original path for a sequel. This movie actually revisits the same time and events that occurred in the first movie. The difference is the perspective. The lions aren’t the focus of this movie. Instead, we’re given a retelling, of sorts, from the perspective of Pumba and even more so from Timon (Lane). The story begins before the events we’re all familiar with. We find Timon back at his own Meerkat Mansion where he doesn’t really fit in. No matter how hard he tries he can’t seem to do anything right. His Mom (Kavner) and Uncle Max (Stiller) try to find something he can do, but it always ends in disaster. So Timon sets off on his own to find someplace he can fit in. Of course, along the way he finds Pumba and the two become fast friends…eh, acquaintances. Throughout the film we learn that the duo were actually present during the crucial moments of the first film. Mostly they find themselves accidentally a part of that story. Finally, Simba (Broderick) shows up and the three friends save the Pride Lands, just as we remembered it…almost.

The prospect of a direct-to-video route was a scary one for fans of the original film. Disney, like most other studios, was known for putting out quick direct films that carried little of the original’s elements. The cast was almost always sacrificed for economics, and production values never lived up to what was possible in a large-budget theatrical release. The future of this beloved franchise looked to be in grave danger.

But somewhere the animation gods intervened and Disney took the unprecedented step of retaining most of the original voice cast. Almost all of that voice cast return to their roles, including: Matthew Broderick as Simba, Robert Guillaume as the wise baboon Rafiki, Cheech Marin as a hyena, and Moira Kelly as Nala. New voices include Julie Kavner trying hard not to sound like Marge Simpson as Timon’s mom and Jerry Stiller as Uncle Max. Even long-time Disney staple Jim Cummings lent his voice as Ed. Cummings, of course was once Winnie The Pooh and appeared in many classic Disney features such as The Jungle Book. It’s a fine tie to the classic Disney films of years ago.

While the production standards never approached the quality of the original film, there was still plenty of care taken in the effort, and the production values here stand well above anything Disney had done previously in the direct-to-video market. The people involved knew that they were building on something very special here, and it shows in the care they took to do it correctly. There is even a new Tim Rice and Elton John song. The other new songs won’t set the world on fire, but they are catchy and carry the story elements. It’s a fine effort that deserves a place along the original now on Blu-ray.

The Lion King 1 1/2  is presented in its original aspect ratio of 1.66:1. The 1080p image is arrived at with an AVC MPEG-4 codec at an average 35 mbps. The film is quite bright and colorful. There may not be a ton of texture here, but the high-definition image presentation truly brings out the above-average animation work with rather nice sharpness and detail.

The DTS-HD Master Audio 5.1 is actually quite lively. The songs have a nice dynamic edge to them with wonderful instrument separation and bright clarity. There is a wonderful elephant graveyard scene with some sweet echo effects that provide some nice atmosphere and might even be a little scary for the young ones. Dialog comes through perfectly.

Timon and Pumba’s Vacation Safari: (4:57) HD The duo offer a nature film with real footage of some of the animals you find in the film.

Deleted Scenes: (11:44) SD There are 7 with a handy play-all feature. There is an introduction with the directors. The pieces are in various stages of production and mostly look like animated storyboards.

Timon – Behind The Legend: (4:04) SD This is a playful mock on the A&E Biography series with Peter Graves trying to find greatness in the character of Timon.

Before The Beginning – The Making Of… (15:02) SD Meet the voice cast and the crew that worked on the film.

This thing could have gone horribly wrong, and Disney had to have known it. That hasn’t stopped them before, and there’s always a lot of pressure to make a quick buck. Thankfully, that isn’t the case here, and I was greatly relieved by the results. This is not a great film by any definition. But it’s faithful enough to be enjoyable all in its own. The idea is quite clever, and the characters are just as much fun as they ever were. Disney learned soon that they had a hit with Timon and Pumba. There’ve been television cartoons and other special presentations. The actors appear to love doing the characters, and it’s a fun way for the franchise to live on. Is it really the same tale? Sure, but “any story worth telling is worth telling twice”.

Gino Sassani is a member of the Southeastern Film Critic's Association (SEFCA). He is a film and television critic based in Tampa, Florida. He's also the Senior Editor here at Upcomingdiscs. Gino started reviewing films in the early 1990's as a segment of his local television show Focus. He's an award-winning recording artist for Omega Records. Gino is currently working on his 8th album Merchants & Mercenaries. Gino took over Upcomingdiscs Dec 1, 2008. He works out of a home theater he calls The Reel World. Favorite films: The Godfather, The Godfather Part II, The Body Snatcher (Val Lewton film with Karloff and Lugosi, not the pod people film), Unforgiven, Gladiator, The Lion King, Jaws, Son Of Frankenstein, The Good, The Bad And The Ugly, and Monsters, Inc.
Looney Tunes Show: Season 1 V.3 The Lion King II: Simba’s Pride (Blu-ray)