A Lonely Place To Die (Blu-ray) 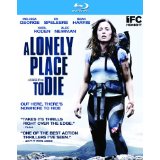 I think most of us can agree that being buried alive would be a horrible way to go. Several movies — Kill Bill: Vol. 2, The Vanishing (not the soft American remake) and, of course, Buried — have exploited that terror to varying degrees of success. Though the action in A Lonely Place to Die centers around a girl found buried in the Scottish Highlands, the camera frequently pulls way back to show us the desolate beauty (and danger) of the mountainous setting. I really wish director Julian Gilbey had kept the action on those mountains.

A group of climbers, led by Melissa George (The Amityville Horror, TV’s Alias), discover an Eastern European girl named Anna buried in an underground chamber. Anna is unable to explain what happened because she can’t speak English, but the group correctly surmises that the girl was kidnapped and being kept alive by the breathing pipe sticking out of the ground. Eventually, the group has to deal with the vicious pair of kidnappers, as well as the mercenaries hired by the girl’s war criminal father to get her back.

A Lonely Place to Die gets off to a very promising start, with an impressive mountain climbing sequence and 20 solid minutes of character development before Anna is discovered. (Not everyone in the group was entirely on board with bringing her along.) The movie’s first death is an incredibly effective stunner, and its subtlety is in stark contrast to some of the overwrought ridiculousness that follows. It seems the director never met a slow-motion shot or unnecessarily loud percussive sound effect he didn’t like. Still, the action on those mountains is exciting and remarkably photographed, and it’s clear Gilbey — who also co-wrote the screenplay with his brother William — knew what he was doing up there.  Kudos to cinematographer Ali Asad. (Although there’s a decent chance viewers might OD on the numerous sweeping shots of the terrain.)

George, staggeringly good in the first season of HBO’s In Treatment, makes for quite a credible action heroine. Her character doesn’t have to do anything superhuman, but she’s totally believable when she’s on the mountain and fighting to protect a little girl’s life. George is both tough and relatable. I also enjoyed the smart-ass stylings of Ed Speleers as a whiny fellow climber, and the badass gravitas of Eamonn Walker — excellent on HBO’s Oz and who really should’ve blown up the way Idris Elba is about to blow up — as one of the mercenaries hired to get Anna back.

Unfortunately, the movie falls apart in the last 30 minutes with a final act that disastrously abandons the mountain setting. All you need to know is that a Fire Festival and a killer in a pig mask are heavily involved. (Seriously.) Things got so out of hand, I was expecting Anna — who kinda looked like a cross between the creepy killer girl in The Ring and the creepy killer girl in Orphan — to turn around and murder everyone.

It’s a shame because, up until the point where it devolved into laughable mess, A Lonely Place to Die was a legitimately effective thriller with a killer setting.

A Lonely Place to Die is presented in its original aspect ratio of 2.35:1. The 1080p image is arrived at with an AVC MPEG-4 codec at an average of 23 mbps. The panoramic climbing shots are unbelievable in both their clarity and texture. Along with George, they’re the stars of the show. Unfortunately, some of the indoor scenes and the film’s climax (which takes place at night) don’t fare nearly as well. The black levels seemed a bit off, resulting a slightly grayish hue over some of these scenes. On top of that, some of the images in the mountain portion of the story occasionally became temporarily stretched.

The DTS-HD Master Audio 5.1 track does an admirable job of conveying the broad range of the movie’s sound effects. You hear every metallic clink from the climbing equipment making contact with the mountain, as well as the low whooshing of air at high altitude. Unfortunately, you also get bombarded by the movie’s over-reliance on booming percussive accents (a digital camera crashing to the ground inexplicably makes a thunderous sound), but that’s Gilbey’s fault, not your speakers’. Also, the dialogue wasn’t always intelligible, though that could have more to do with the Scottish/Serbian accents.

Trailer
(I have to say: I’m pretty disappointed at the lack of bonus material. I would’ve been really interested to see how they filmed some of the mountain sequences or how much climbing the actors did themselves. At the very least, I want an explanation as to what the filmmakers were thinking in those last 30 minutes.)

A Lonely Place to Die is absolutely a cut above the usual straight-to-DVD fare. (Though the movie played its share of festivals and actually had a blink-and-you-missed-it theatrical run.) Heck, I could probably argue that it’s a cut above a theatrical hit like Vertical Limit. The movie looks and sounds quite good on Blu-ray. I just wish it had stuck to what it was doing well instead of leaving such a bad, ridiculous taste in our mouths.