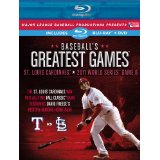 They came back to tie the game five different times. They were down by two runs in the bottom of the ninth and facing a closer who had been a perfect 6 for 6 in save situations during that postseason. They were down to the last strike of their entire season two different times. I guess what I’m trying to say is, at a certain point, it became obvious — painfully obvious, if you happen to be a fan of the Texas Rangers — that there was no effing way the St. Louis Cardinals were losing Game 6 of the 2011 World Series.

Personally, I didn’t have a horse in the race when I originally watched this game live on October 27, 2011. (I’m a Yankees fan. Before you boo me, you should know I was born in 1982, which is the exact year they stopped making the playoffs for 13 straight seasons, the longest drought since the franchise became the Yankees. So they’ve been lousy for a really good chunk of my life, including during some of my most formative years as a sports fan. You may commence booing me.) The fact that I couldn’t have cared less who won, but I also didn’t dare go to sleep until it was over — and I suspect I was far from the only one — tells you how objectively thrilling this game was.

It’s easy to see why Major League Baseball decided to release this particular game on a Blu-ray/DVD combo pack. Though I doubt many people outside of St. Louis would sit through this entire no-frills presentation — which includes 218 minutes of the commercial-free game, as well as a short pre-game and post-game show (the DVD edition is 225 minutes, with a slightly longer post-game show) — re-watching this gem reminded me there was a lot more to this 10-9 Cardinals win than the heroics of World Series MVP David Freese, Lance Berkman and Co. (Thrill-seekers can also use the menu to jump directly to any half of any inning.)

Up 3-2 in the World Series, the Rangers had a chance to win the first championship in franchise history, and it seemed like both teams were on edge. (They combined for a sloppy five errors.) Even before Freese’s game-winning bomb in the bottom of the 11th, the Cards had already become the first team in World Series history to score in the 8th, 9th and 10th inning of a game. Then there’s Josh Hamilton, noticeably hobbled by an injured groin, doing his best Kirk Gibson impersonation in the top of the 10th with a huge homer and making Rangers fans believe they could overcome their collapse from the bottom of the 9th.

From a pure entertainment standpoint, I can’t decide what I liked best. It’s hard to beat the increasingly spastic dugout reaction shots of Rangers manager Ron Washington whenever his team scored a run. Or how about the fact that every inning, except for the 3rd, featured at least one run from one of the teams? While those are both good options, I’m going go with the instantly outdated on-air promos for the premiere of Allen Gregory on Fox, though the suddenly-quaint sight of Albert Pujols in a Cardinals uniform is a close second.

After hometown hero Freese smashes his 11th inning home run, the Cardinals celebrate as if they’d just won the World Series. Given what an all-time devastating loss this was for Texas and St. Louis’s relatively easy Game 7 win, it turns out the Cards were right.

Baseball’s Greatest Games – 2011 World Series Game 6 is presented in an aspect ratio of 1.78:1. The 1080p image is arrived at with an AVC MPG-4 codec at an average of 20 mbps. Though some of the TV graphics and certain camera angles — like some crowd shots — are a bit fuzzy, the video presentation of the game itself is a slight step up from the HD broadcast. The game action looks consistently crisp, which is impressive when you consider we’re talking about an unpredictable live sporting event.

The DTS-HD Master Audio 5.1 track only applies to the Fox TV broadcast with Joe Buck and Tim McCarver, and is a feast of ambient crowd noise that makes it feel as if you’re among the Busch Stadium crowd if you turn your speaks up loudly enough. Buck and McCarver come through loud and clear. The other audio tracks — presented in English DTS-HD Master Audio 2.0 and Spanish DTS-HD Master Audio 2.0 — are more muted radio broadcasts from St. Louis and Texas stations, as well as a Spanish-language broadcast, synched up with the game. If you like biased local sportscasters, switch over to the St. Louis track for Freese’s homer and yell “Get up!” along with the announcer.

This Blu-ray gives you an instant-classic game with only minor upgrades in its audio-visual presentation from Fox’s HD telecast. The lack of special features is a bit of a letdown, but not a deal breaker because the game itself is so good. I’d still say this no-frills package is mostly for hardcore St. Louis Cardinals fans…or anyone who has a Rangers fan in their life they want to torture.