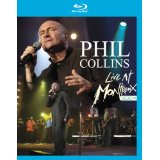 When Peter Gabriel left the band Genesis to pursue his own solo career, it was the break of a lifetime for the band’s drummer, Phil Collins. He took over the front-man duties with style, and before long Genesis was enjoying the most commercial success of their lives. Collins provided the smooth, easy-to-listen-to voice that Gabriel really never had. The tunes were instantly more recognizable and stuck with you for a long time. Of course, that meant that Collins would go out and work on that solo career as well. He didn’t quite abandon Genesis and managed to keep both careers on the charts for quite a long time. If anything, the two entities became more and more the same. It’s hard to distinguish the band’s Invisible Touch from anything Collins released under his own name. No problem, as long as the records were selling. And sell they did.

We haven’t heard a ton from Collins in recent years. He’s always been there. He’s toured under both names a few times in recent years. But the releases became less and less successful. Much of this can be traced to Collins’ wish to become a one-man band. The last few CD’s were produced in his own home studio with Phil filling in for most of the instruments. The lyrics lost much of their creativity, and it seemed that the British rocker had waded deep into stagnant waters.

This collection captures two very different appearances at the famous Jazz Festival at Montreux 2004. Only one is in high definition. The 2004 show features a tight band and the tracklist reads like a greatest hits album.

Something Happened On The Way To Heaven

You’ll Be In My Heart

Another Day In Paradise

In The Air Tonight

Dance Into The Light

It’s Not Too Late

The show begins on some shaky ground. We all know that Collins began his musical career behind the drums and continues to work them from time to time. So, he decided to begin the show with a three-man drum solo that drags on for about 11 minutes. He’s obviously having a blast, and the drum fans in the audience might eat it up. The rest of us are getting a little bored. Appropriately, he begins the actual concert with Something Happened On The Way To Heaven in which the lyrics include the oft-repeated plea: How many times must I say I’m sorry. From that point on the show never lets up. There’s a ton of energy to be found here, and Collins reproduces the music almost flawlessly. The band includes some long-standing members as well as a couple of newcomers.

It’s particularly nice to see Leland Sklar, who must have appeared on hundreds of albums over the years. He’s one of the best studio musicians from the 60’s and 70’s and looks here like he just stepped out of a ZZ Top concert. Another bright spot is Gerald Albright on the sax. He’s put on a ton of weight over the years, and that thing looks tiny in his hands these days. But he can make it sing. The concert is kept relatively simple in the lighting department and doesn’t feature the usual trend of a huge video screen. Here it’s all about the music.

The concert is presented in its original 1.78:1 aspect ratio. The concert certainly looks good in high definition brought to you in full 1080p with an AVC/MPEG-4 codec. The lighting is never very good at a concert, but the impressive contrast and solid black levels allow for wonderful detail and sharpness in the image presentation. You can see the beads of sweat on Phil Collins’ face and head during close-up shots.

You have a choice in the audio. You can opt for a LPCM stereo track or a DTS-HD Master Audio version of the music. I opted for the fuller sound of the 5.1. Everything is crystal clear. The instruments enjoy wonderful separation, but Phil’s smooth voice isn’t exactly so strong. He doesn’t always cut through and gets lost. It’s really evident during a song that features other vocalists joining on lead. They bury Phil.

A 1996 Collins Montreux Concert: This 90-minute concert is not in HD and is full frame. Here Phil creates a big band arrangement of some of his songs. Most are instrumentals and are rather disappointing. There are a few outstanding moments. Tony Bennett makes a one song appearance, as does sax legend David Sanborn. Quincy Jones is the band’s conductor. Collins remains behind the drums for most of the concert with only a couple of singing moments.

While I was quite disappointed in the 1996 concert, that’s not why you should buy this Blu-ray. The main event is over two hours long and provides Collins with a very good band. There’s a rather clever ending with Take Me Home as Collins introduces the band. This isn’t the next best thing to being there, it’s considerably better. You get your own comfortable seat and likely better sound than the crowd enjoyed. It’s the kind of release that will leave you wanting “just one more night”.

Gino Sassani is a member of the Southeastern Film Critic's Association (SEFCA). He is a film and television critic based in Tampa, Florida. He's also the Senior Editor here at Upcomingdiscs. Gino started reviewing films in the early 1990's as a segment of his local television show Focus. He's an award-winning recording artist for Omega Records. Gino is currently working on his 8th album Merchants & Mercenaries. Gino took over Upcomingdiscs Dec 1, 2008. He works out of a home theater he calls The Reel World. Favorite films: The Godfather, The Godfather Part II, The Body Snatcher (Val Lewton film with Karloff and Lugosi, not the pod people film), Unforgiven, Gladiator, The Lion King, Jaws, Son Of Frankenstein, The Good, The Bad And The Ugly, and Monsters, Inc.
Baseball’s Greatest Games – 2011 World Series Game 6 (Blu-ray) Sidewalls