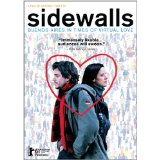 Much like a relief pitcher, sometimes a substitute has to fill in for a movie review. The person is usually a specialist, one who can write up a review in a snap, the blink of the eye. Well, sometimes the relief pitcher runs into a tough power hitter or a wiry runner. I find myself in a similar situation with the dreaded foreign film. It sounds clichéd and uncultured perhaps, but I did not even want to read today! Okay, anyway on to the show of Sidewalls.

The sun rises upon Buenos Aires. We get some depressing narration about the city and how overpopulation has basically made the city a shell of the splendor it once held. The narrator compares this to the humans within the city and how their lives have no direction, the same as an ill-built skyscraper. This narration concludes with a discussion of how letters and numbers in apartments represent class status.

The narrator which turns out to be Martin (played by Javier Drolas) sitting in a computer chair has plenty of terrible afflictions well except for suicide. He lives in an apartment, does web design and hardly ever leaves his place except to visit his shrink. Martin has even designed a hit game which strangely looks like breakout. To top it off, his accomplishment seem fixated to the world of gaming including virtual soccer, tennis and killing mafia members.

His shrink suggests that he gets into photography which he gladly takes up in an unique fashion. Furthermore, Martin keeps with him a survival backpack since his fears require him to never use a vehicle and perform everything he needs by foot. It weighs about 5.8 kilos which represents 7% of his body weight. But there is another character to meet in this tiny struggle of life.

Here is Mariana (played by Pilar Lopez de Ayala). She’s been an architect for two year but still has not built anything. Not even a bathroom. She’s had relationship issues, and the game of life has moved her back completely into reverse. Her life consists of boxes and a roll of bubble wrap that she has to pop if she doesn’t well want to pop. She has a duplex apartment with a window and a balcony that is fairly annoying.

Mariana’s favorite building is a planetarium because it makes her feel small and insignificant. Suddenly we shift seasons, and come to a grizzly scene where a dog has committed suicide by jumping over a balcony (and subsequently a person getting run over and a woman fainting). As it turns out, both Martin and Mariana are at the scene but never see each other.

Martin does not sleep much for the simple fact he really does not do much. He averages maybe a couple of hours of sleep before opening up a package and starting to think that he might have discarthrosis. The doctor later that day (played by Jorge Lanata) quickly dispels that notion and tells him he just needs to exercise as he takes a smoke out a nearby window.

Back to the bubble wrap lady who unwraps a mannequin. She proceeds to clean the mannequin head to toe. Mariana actually works as a shop window designer. She tries to have fun with it and comes up with some wild designs. These designs Martin even stops to admire every once in a while. She likes to relax by looking through a Where is Waldo book. But much to her dismay, she can never quite find Waldo in the city.

Martin has also acquired a dog from his ex-girlfriend about seven years ago. The girlfriend never came back for the dog and stayed in New Jersey. As we watch both Martin and Mariana (in separate apartments naturally) play with a weird computer app that distorts their facial images, we know that at some point these two will meet. The only question is when, and what exactly will happen on that eventful day.

Sidewalls is a romantic comedy (with some rather depressing moments) at its core of two very strange people who go through a series of events eventually run into each one too many times. Part of the problem is that by the time it actually happens, we do not care as much about the characters. The actors and actresses are good enough, but the writing is about as dull as anything that could be imagined.

The only inspired part of the movie is perhaps the ending because of the cuteness factor but after 80+ minutes of a very mundane movie, it hardly matters. They even try to spice up the movie by throwing in a couple of random dates that the two leads have with others but it hardly goes anywhere except back into the same boring pace. Again, the characters are likeable but the story simply is not.

Some people will like this movie because of the quirky characters. For some people that will be enough. The problem is once you strip away these eccentric leads, you are left with a very dull story. I honestly can not recommend this movie, it clearly belongs in the bullpen only to be used when the outcome is no longer in doubt.

(one brief author note: This movie is in Spanish with English subs. It is an easy read but there is one part where they forgot a translation or two. I’ll chalk it up to sloppy mastering but it should be easy enough to pick up)

Michael Durr has been reviewing movies for the better part of fifteen years now. He primarily enjoys thrillers, sci-fi, animation and even a little courtroom drama. His favorite films include Escape from New York, the Goonies and anything with Alyssa Milano. When he’s not praising Kurt Russell as the greatest actor of our time or scratching his head over a David Lynch flick, he’s spending time at home in Texas with his lovely wife, Lori and his amazing son. How they put up with him is a mystery, but even Basil Rathbone doesn’t have the time to solve that one.
Phil Collins: Live at Montreux 2004 (Blu-ray) South Park: The Complete Fifteenth Season (Blu-ray)