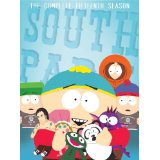 If you haven’t heard of South Park by now there is certainly something wrong with you. You’re just not paying attention. More important, you’ve got a lot of catching up to do. The show is entering its 16th season on Comedy Central, and Paramount is now giving us the 15th season on high definition Blu-ray. And, if you are just hearing about South Park for the first time, what a wonderful journey you have ahead of you. You might need an airline sickness bag on occasion, but you are in for a solid treat.

After 15 years you would think any show might have to start losing steam. It’s true that South Park did appear to suffer some during the middle years, and I was one of those critics asking how much longer the show could go on. But the series experienced something of a renaissance in the last couple of years and is better than it has ever been.

I’ve been a fan of South Park ever since a friend introduced me to the internet Christmas card that started it all. It was Santa versus Jesus, and these short potty-mouthed kids that somehow wormed their way under your skin. Pretty soon I was downloading the episodes and watching them on my computer. For some reason I can’t quite explain, I’ve very rarely watched an episode on Comedy Central. By the time things were getting tighter and riskier downloading the shorts, the single disc, 4-episode DVDs began to arrive in stores. So my South Park viewing moved from the PC to the DVD player. In a short time season sets began to arrive, and I looked forward to them with much anticipation, still watching it infrequently on television. After all, who needs the commercials and those silly network bugs that distract you on the screen? The series itself evolved in that time. The show was once achieved through a stop-motion process using construction paper cutouts. The animation was crude. After the Christmas card, the characters were significantly redesigned. They had a very evil look on that short. The first couple of episodes brought us an evolution toward the characters we know and love today. After a while the animation went to a computer process. The look remained the same, but gone were the paper cuts and stop-motion photography. As the show progressed there were less and less bleeps. It’s not that the language got any tamer. Standards got a little looser. Finally the bleeps would disappear from at least the DVD/Blu-ray releases.

I often have trouble believing that South Park has been around for as long as it has. It’s not just the passing of 15 years, but the sheer brilliance in the face of an increasingly politically correct society. It’s like watching old episodes of All In The Family. Who believes that Archie Bunker would have any chance of survival in the 21st century? It’s no wonder that Norman Lear has become involved in the series. It’s the last remaining vestige of a once great freedom to be ridiculous and offend. Eric Cartman’s a lot worse than Archie ever was. We always knew that, in his heart, Archie had a soul. Cartman’s a psychopath without a conscience, and in a civilized society we would be terrified of the existence of such a demon spawn…except he’s just so dang funny. Trey Parker and Matt Stone have been walking a tightrope for over 13 years now, and it just doesn’t get old. One of the reasons the show doesn’t grow stale is their ability to make such a quick turnaround on current events. Because the show takes literally days to write and produce, they are quite often always the first to address an issue. They had an election-night episode on literally the next day in last season. That means the ideas stay as fresh as the headlines. Finally, you have to credit the expanding universe of good characters. The core group of Cartman, Stan, Kyle, and Kenny were great for a lot of years. But, watching this 13th season you have to admire how much Butters has infused himself into that core. We also have such great semi-regulars as Timmy, Jimmy, and Token. These characters allow the stories to expand in ways the core group could not. I’ve honestly come to think of Butters as one of the core now.

So what about the episodes themselves? Let’s play a little game called: The Good The Bad, and The Ugly, shall we?

Humancentipad: If you’ve seen the film The Human Centipede you know this one could have just as easily ended up in the Ugly bin. But the idea is one of the most clever yet. We all click agree when we update our software, particularly the free stuff. What if we were agreeing to some bizarre medical experiments? That’s what happens to Kyle.

Crack Baby Athletic Association: We all remember Adrian Peterson comparing the NFL and its players to slaveholders and slaves during the lockout. It was ridiculous, and All Day came to his senses and apologized. If slaves had been making multi-millions a year, I think we could have forgotten all about that pesky war between the states. But college football is a different story. Cartman realizes that he can make a ton of money having crack babies fight over a little ball of crack without paying the players. He ends up going to a university to get advice on how to maximize his slaves. Cartman is priceless here.

City Sushi: The City Wok has competition from a new Japanese place next door. If that’s not bad enough, the people of South Park think that Chinese and Japanese are all the same. But forget about that storyline. How about Butters being diagnosed with multiple personality disorder? Now that’s funny.

1% Cartman’s health is so bad that he brings the entire school’s average down in the President’s Fitness Scores. Now the rest of the school are upset that they have to suffer the consequences. It’s an obvious punk on the latest “occupy” movements.

The Last Of The Meheecans: The boys are playing border patrol, and Cartman is getting carried away, as usual. When the game ends Butters is left out in the cold looking for the game’s border but gets mistaken for a real illegal. Eventually, he leads the Mexicans into sneaking over the border back into Mexico.  Cartman gets to be a real border patrol cop and you know where that’s going. Respect My Author It I.

Bass To Mouth: A website is spilling the beans on the gossip at South Park Elementary. It turns out to be the work of a gerbil with a taste for the news. The website idea is actually pretty cool, but the guys did a better job of that when they punked Facebook. This one is just stupid.

Funnybot: Jimmy has the first special-ed comedy awards, and the school votes the Germans as the least funny people in the world. They retaliate by unleashing Funnybot, a robot that tells jokes. He’s a cross between Nomad from Star Trek and Doctor Who’s Daleks. Again, cool ideas, but it’s just not that funny in execution.

Royal Pudding: Another jab at Canadians, but this one is lame. When a Canadian royal wedding is interrupted by the kidnapping of the princess, Ike has to come to his nation’s assistance. Tie in some tooth decay stuff and very lame wedding mocks and this 20 minutes feels like hours.

Broadway Bro-Down: Randy discovers that Broadway productions are actually filled with subliminal messages that make woman want to spend hours giving their guys oral sex. He decides he can write one himself, but his messages aren’t very subtle, and the Broadway big shots come after him for threatening their secret. I’ll bet you can guess where this one gets ugly.

Assburgers: Here’s a golden idea. Cartman wants to fake a disease, and he thinks shoving hamburgers in his behind is the way to do it. Unfortunately, it leads to very yummy burgers, and soon Cartman’s Burgers are selling like crazy thanks to his secret flavoring technique. Great idea, but the guys couldn’t help themselves with the crappy images.

TMI: When the school posts the growth progress of each student’s height, Cartman and the boys think they’re posting penis sizes. Cartman decides to set the record straight and this one gets very ugly, very quickly.

You’re Getting Old: It’s Stan’s 10th birthday, and suddenly everything looks like crap to him. Of course, that puts a lot of crap on the screen. See where I’m going with all of this?

Each episode of South Park is presented in a 1.78:1 aspect ratio. Colors are fantastically bright in this 1080i image. Brought to you by a solid AVC/MPEG-4 codec, the picture certainly looks as good as it ever did. You can really appreciate those special things like the comic frames. This is starting to look better with each year.

Stone and Parker are back with their “commentary minis”. The boys do address the controversy in the mini’s but turn it into a joke; when they say they’re about to explain, you get two minutes of beep and are returned to them saying that was basically the story.

6 Days To Air: (42:05) This is a very intimate look behind the scenes from idea to production. You hear the guys talking about how close they cut it. Now you get to see it. It’s the best look yet at how the show is made.

There are also two short additional pieces that are episode specific.

The show has certainly evolved in 15 years. The production values continue to improve. It’s hard to believe that there was so much bleeping of the language in those first years on television and on the DVD sets that followed. The bleeps are gone, and the children drop F bombs like Nixon on a Hanoi airfield. The evolution is something to behold. The guys have pushed the political correctness envelope to the point where there really don’t appear to be any limits to where the show might take you. Now, that has a downside, to be sure. These guys can just be disgusting, and even I have to roll my eyes at times. But they can also be clever and genius with such a simple medium. Even at their worst, the show holds an almost morbid fascination with the fans. We continue to watch even when we really don’t want to. I know it sounds messed up, but “I don’t make the rules. I just make them up and write them down.”

Gino Sassani is a member of the Southeastern Film Critic's Association (SEFCA). He is a film and television critic based in Tampa, Florida. He's also the Senior Editor here at Upcomingdiscs. Gino started reviewing films in the early 1990's as a segment of his local television show Focus. He's an award-winning recording artist for Omega Records. Gino is currently working on his 8th album Merchants & Mercenaries. Gino took over Upcomingdiscs Dec 1, 2008. He works out of a home theater he calls The Reel World. Favorite films: The Godfather, The Godfather Part II, The Body Snatcher (Val Lewton film with Karloff and Lugosi, not the pod people film), Unforgiven, Gladiator, The Lion King, Jaws, Son Of Frankenstein, The Good, The Bad And The Ugly, and Monsters, Inc.
Sidewalls Wallace & Gromit: World of Invention (Blu-ray)