Only in America with Larry the Cable Guy: Volume Two 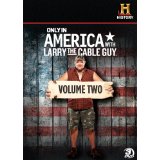 “I love this country. So I had this idea to find out all the things that make this country great: the people, the history, the way we do things! Only in America.”

To put it mildly, I’m not exactly in Larry the Cable Guy’s target demographic. Before sitting down to watch this DVD set, my exposure to him was limited to hearing his voice in the Cars movies and recoiling in horror whenever I stumbled onto any of his straight-to-DVD “films” at Movie Stop. Heck, I don’t think I’d ever seen him with sleeves or without his trademark camo hat.

After watching the comedian gamely bumble his way through 11 episodes of History’s Only in America with Larry the Cable Guy: Volume Two, here’s hoping he stays far, far, far away from movie sets. (And out of tutus.) If you’re not familiar with this show — but you’ve seen the superior Dirty Jobs — you’re in luck because Only in America is kind of a ripoff of the popular Discovery Channel hit. (With a little bit of the much lesser-known Shaq vs. sprinkled in for good measure.)

Even though the episodes have titles like “Larry and the Superpig” and “Larry Cuts the Cheese”, each installment actually features three separate segments with the host visiting a different part of America to find out what makes this country unique. (If you took a shot every time the comedian turns to the camera and brags, “Only in America”, you’d be out by episode 4…not that I would know from personal experience or anything. Let’s move on.) In reality, what ends up happening almost every time is that he’ll meet a shy or eccentric local character, crack a few jokes, watch them do their job well, crack a few jokes, turn to the camera and say, “Only in America”, attempt to do their jobs well, fail to do their jobs as well and crack some jokes. In fact, the biggest difference between this show — alternate title, (Not So)Dirty Jobs — and its Discovery Channel counterpart is that the host’s personality really takes center stage here.

I just alluded to the fact that Larry the Cable Guy rarely stops cracking jokes on this show, but they’re always told in a good-natured way, and he never mocks his varied subjects. (He’s laughing with them, not at them.) Even when his barbs veered on the edge of racist/sexist territory, I didn’t find them offensive because the comedian was more than willing to laugh at himself and his own shortcomings. (In fact, he appears to be his own biggest fan, judging by the way he cracks up at his own jokes.) The set’s lack of special features isn’t a big deal because stuff like watching Larry’s crew and camera operators get stuck in South Carolina mud doubles as outtakes and a behind-the-scenes doc.

I would’ve liked for each episode to have been a little more cohesive, but bouncing from making Tabasco sauce to ice fishing in Minnesota to dancing with the Dallas Cowboys cheerleaders — as he does in “Larry Goes North” — is what this eclectic country is all about! (Right?) My favorite episode was actually the first one in this collection: in “Larry Deep Fries Everything”, you get the physical comedy of watching him train with Marines, the casual sentiment of watching him go to his home state of Nebraska and help the tiny town of Monowi (with it’s population of 1), and go to the Texas state fair to deep fry everything from a peanut butter sandwich to spinach. At other times, I wished he would cede the spotlight a little more, but then I remembered this isn’t meant to be a serious documentary — this is a star vehicle for Larry the Cable Guy (the character created and personified by comedian Dan Whitney) to do his thing.

Despite all that, the show still manages to sneak in a surprisingly decent amount of intriguing historical information through Larry’s antics. That’s more than I can say for some of History’s other shows, including Ice Road Truckers, Ax Men and Life After People, which is literally the opposite of history. (You know how people rightfully give MTV a ton of flack for not showing music videos anymore? History — formerly the History Channel — needs to get at least 60 percent of that same flack for their programming choices in the past handful of years.)

In the end, this formulaic show doesn’t break any new ground. However, it does feature its affable host in his element: interacting with plain-old folks who are quietly extraordinary. To be totally honest, I wasn’t thrilled when I found out I’d be reviewing this show, but I’m glad I “got-r-done.”

Only in America with Larry the Cable Guy: Volume Two contains the following season 1 episodes: