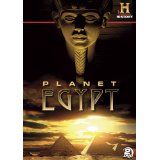 Egypt has always been known as paradise on earth to its people and the many visitors it gets each year. The land is often described as a strong, fertile land with an emphasis on history and rich tradition. Personally, I find myself in a general state of knowledge about the country but wished to know more. My curiosities peaked when I received a copy of “Planet Egypt” on DVD at my doorstep thanks to the History Channel. Let us see what rich history is held inside.

Disc One
Birth of an Empire:
Egypt has always had war and peace. Their technology was always ahead of its time and their legacy has stood the test of time. In 3000 BC, also known as Dynasty 0, a tablet is made to depict the adventures of what would be Egypt’s first pharaoh, Narmer. The tablet would become known as Narmer’s Palette. Supposedly, Narmer ruled the south and had asked the tribes of north to abide by his rule. According to legend, they opposed but eventually Narmer used force to usurp the area from the tribes.

But did the battle ever happen? Archaeologist Gunter Dreyer who is investigating Narmer’s tomb notices that compared to later pharaohs such as Amenhotep or Ramses, his tomb is very small. We also visit Renee Friedman, another archaeologist at Hierakonpolis who is studying the Narmer Palette to see what answer lie in store for her. This might be a tale of elaborate fiction, but it could also be a great piece of history.

Pharaohs at War:
In the second part, we shift our focus to Thutmose III. In 1457 BC, he would rise to become a very important leader and shut down the threat of the Mitanni, Egypt’s strongest rival. We learn that Thutmose grew up in a time of no famine or war. Hatshepsut took over rule of Egypt after Thutmose II died at a young age and Thutmose III was too young to rule. She wants to be regent for life but important care is made for Thutmose III.

Thutmose is taught everything he needs to possibly be a future ruler. In the meanwhile, we learn of the Hyksos which were the first people to invade Egypt. One of their technological advances that helped them beat the Egyptians was the chariot. King Sekhemrewadjkhau, ancestor to Thutmose was defeated by the Hyksos and ruled for 108 years. Eventually King Ahmost regained Egypt. But now, the Mitanni are closing in for an attack. Hatshepsut and Thutmose III (now leader of the army) are in disagreement over what to do.

Disc Two
Temples of Power:
The second disc moves forward to tell us the story of Akhenaten, a heretic who challenged the power of the gods. Amun, once an obscure god becomes an untouchable deity and soon merges with Ra (the Sun God). The priests of Amun-Ra soon become a powerful unit, and are challenged by no one until Akhenaten takes to the throne. We learn about the rule of Amenhotep III (father to Akhenaten), thanks to the findings of archaeologist Hourig Sourouzian. Amenhotep III wished to be a god on earth.

The program teaches about the Opet Festival, a yearly gathering of where the priests of Amun-Ra take the “god” out to the people. Amenhotep helps the priests take charge of the festival and to collect the offerings and distribute accordingly. Meanwhile, across the river Karnak, Amenhotep is building the biggest funeral temple that Egypt has ever seen. Amenhotep takes on the guise of the Sun Disk (Aten). However, at the height of his influence, he dies and then his son Akhenaten takes over.

Quest for Eternity
In the last part of this four part mini-series, we learn how Egyptians often seem to be fixated on their deaths. An almost morbid obsession, the tomb of Ramses the Great is revealed to be the most elaborate ever. In the summer of 1279 BC, Pharaoh Seti is dead. The heir to the throne is Ramses who will inherit a large empire with millions of people. His reign will last an incredible sixty seven years and he will outlive many of his own sons and daughters. Ramses would spend much of his life planning for his death.

Death was not the end, it was the beginning. His scribe, Ramose will oversee everything right down to the smallest detail. In present time, Kent Weeks leads the Theban Mapping Project in which They will map the entire burial complex where every underground chamber is plotted and measured. We also learn about mummification and how humans were not the only ones to go through this process. All life follows an eternal rhythm and part of the life is the descent into a happy afterlife. Ramses yearns to be immortal in life and death and become the greatest pharaoh of them all.

(*and now back to the review*)
This is a four-part mini series that ran on the History Channel just a little bit back. It makes for a total of 3 hours and a few minutes of change. Why they named it Planet Egypt I could not tell you except maybe it had to do with the fact that to the Egyptian people their country felt like a whole planet. That’s all I got (and it is not much). This is kinda like the documentaries in the sense that they pick some distinct points in Egypt’s pharaoh history. Then most of the history is only made up of common facts most people know mixed in with lets go to this archeological dig and talk to the one who has spent 10,20, 30 years digging up clues.

It’s fairly boring, tedious and we do not gain a sense of what happened in Egypt four to five thousand years ago. The programs also tend to jump around. Historical documentaries such as these should follow a path A to B order. Not Path D to Path B to Path A and so forth. It’s jarring and instead of engaging the viewer, it only serves to confuse them. There is some good information but it is not worth sitting through 3 hours to find it.

The video is in 1.78:1 Anamorphic Widescreen presentation. The footage is a mixture of present day archeological digs mixed in with those wonderful recreations. Video is steadily above average to good. As one could guess, there are a lot of browns here in the landscape and details tend to show not quite as frequently as I would hope for. It is certainly serviceable, I just keep wishing for more than an average presentation with some kookie recreation scenes.

For the audio portion, we get a 2.0 Dolby Stereo track in English. Audio is the usual documentary mix. We get the stern professional voices talking about a subject that interests the audience but we hardly know anything about it. My wife, who has read up on a lot of the religion of Egypt informed me that the moderator had a few inaccuracies when speaking the various names of places and people of Egypt. I am not going to strike very much against it since that is something that only the non-casual person will notice but still worth repeating. Subtitles are provided in English and Spanish.

Typically, the History Channel as well as most A&E products are right on the money. The documentaries serve as interesting, historically accurate and often engaging. Planet Egypt unfortunately did not provide us hardly any excitement at all. They took four points in Egyptian history and then ran around the subject for forty five minutes before giving us a basic ending. There is no build up and heck it could even be argued that some of this is not really at that historically accurate. Remember the phrase, “History is told by the winners.”

The video and audio are fairly basic and as is the course with most History Channel documentary packages, there are zero extras to be found. I am sure that there are a few casual viewers out there who will find some pleasure in the re-enactments or perhaps wow somebody who is new to Egyptian history. Go ahead, watch it and then go find some real books on the subject. The rest of you can avoid this one with little worry. Much like the people participating in these important archaeological digs, you can sift through sand only so much before you realize there is nothing there.

Michael Durr has been reviewing movies for the better part of fifteen years now. He primarily enjoys thrillers, sci-fi, animation and even a little courtroom drama. His favorite films include Escape from New York, the Goonies and anything with Alyssa Milano. When he’s not praising Kurt Russell as the greatest actor of our time or scratching his head over a David Lynch flick, he’s spending time at home in Texas with his lovely wife, Lori and his amazing son. How they put up with him is a mystery, but even Basil Rathbone doesn’t have the time to solve that one.
Only in America with Larry the Cable Guy: Volume Two The Darkest Hour (Blu-ray)