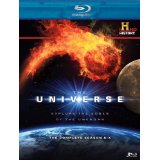 The History series has lasted for six seasons to date. The show uses modern space photography, computer-generated images, and demonstrations along with respected scientists to explore the various aspects of our universe. While more time is spent in our own back yard exploring our solar system, the series does take us to the outer reaches of space, going back about 13 billion years. That’s as far as we’re able to see. The show is narrated by Erik Thompson. Of course, there is plenty of narration by the scientists.

The episodes do provide a wealth of information. I’ve been a big astronomy reader over the years, but the subject is ever-changing, and shows like this offer many new and fascinating facts. Combine that with some truly spectacular images, and you get a series that just might be worth watching. There is a lot of repetition. You can tell where the commercial breaks were, and the show recaps after each break. Of course, watching the Blu-ray, it feels like an instant repeat of what you just saw. I know that there is care not to edit out stuff when releasing it, but I think we’d all forgive a quick snip of the regurge stuff. They also tend to be a bit more dramatic than they need to be, particularly on the doomsday scenario stuff. I thought I was watching the trailer of the latest disaster film at times. These guys sure know how to keep you awake at night

The episodes appear on 3 discs.

Catastrophes That Changed The Planets:

“If you think Earth is a safe haven, think again.”

It’s another top-ten-list-of-disasters episode. This time we get to see and hear about the biggest destructive events that brought about the solar system as we know it today. Highlights include a giant impact on Mars causing a crater to eat up 40% of the surface and a runaway greenhouse effect on Venus. I guess they should have switched to CFL bulbs up there. There’s the Shoemaker-Levy impacts on Jupiter. The extinction impact on Earth doesn’t make the cut.

“Could our Sun have an evil companion? An undiscovered death star rotating at the furthest edges of our Solar System?”

Sounds like pure science fiction, but there are those who believe it’s true. Some scientists believe that this star is responsible for extinctions on Earth every 26 million years or so.

How The Solar System Was Made:

“The Solar System: How did it emerge from the intergalactic chaos?”

It appears that we were all born of violence on a galactic or even universal scale. Of course, there’s a ton of repeat here from the first episode. This piece focuses on the first 700 million years of the solar system’s development.. Mix in some big explosions and collisions let spin for a few hundred million years…and here we are.

“You’re lost on an alien planet. Food is running low. Oxygen is running out. Help is 100 million miles away. Mars is a lethal place.”

This episode follows a scenario where the first manned mission to Mars crash lands. The episode deals with the various challenges to survival and, of course, the consequences of failure.

“Throughout it’s more than 4 billion years of existence planet Earth has endured some extremely rough days. But what were the worst?”

You think you’re having a bad day? Here’s another countdown of Earth’s 7 worst days. They include runaway vulcanism, deep freeze, and a cycle of shake and bake.

God And The Universe:

“Is science now starting to find elusive evidence of God?”

If you’re looking for any kind of real analysis of that question you will be very disappointed. We get a lot of string theory and other discoveries. The episode’s scientists are pretty much anti- the existence of God and say so here. One calls the heaven a myth and most consider God to be the laws of physics. Fr. Spichter stands pretty much alone in defending the idea of a supreme intelligence at work here.

“Thousands of witnesses have claimed to see UFO’s, and their accounts are strikingly similar. Mainstream science says the evidence just isn’t there.”

This is less about real UFO sightings and more about exploring the technologies aliens would need to get here. There are only about five minutes of sighting stories here.

How Big, How Far, How Fast:

“The numbers of the Universe boggle the human mind. Most of us give up even trying to comprehend such titanic sizes, distances, and speeds”

This episode brings those numbers down to scales we can more easily digest. I’m not sure the comparisons really make it any easier to digest the real thing, but some of the models are entertaining enough.

Our Place In The Milky Way:

“In the Universe, it’s important to know your nearest neighbors.”

The episode begins by explaining we don’t really know where exactly we are in the Milky Way. Theories abound and the episode tries to bring our galactic hood into sharper focus.

“In the deep nothingness of space, the cosmic silence is broken. Galaxies, stars, planets and moons sing out with strange and alien music.”

It’s another countdown show that plays like a music top ten. We get to hear some rather eerie sounds from the cosmos. Plenty of shrills, beeps, clicks and other unusual sounds and patterns bring the Universe alive in an audio way.

“Between stars, between galaxies in the vast majority of space, the temperature reads more than 450 degrees below zero. Now far off frozen places bring strange new mysteries.”

Put on your parkas, because this episode is out to find the coldest places in the Universe. Surprisingly, the coldest known place in the Solar System is in a crater on the Moon.

“Shrinking down billions of times, into the realm of atoms and sub-atomic particles, takes us into a strange unexplored world.”

From outer space we travel to inner space for an intriguing look at the very small. Most of this episode deals with quantum physics and the potential applications in computer science. Image a particle that can be many places at the same time and communicate changes instantly across vast distances, even to the other side of the Universe. That’s what we’re exploring in this episode.

“Chart a daring course with comets, the cosmic time travelers of the skies.”

The episode gives us a pretty good primer on what comets are and how they behave. Much of the episode has us following a fictional future spacecraft that follows the long journey of a comet as it goes around the sun. Of course, these guys won’t resist showing us some of the devastation that comet collisions with Earth might bring, or have brought.

“A maverick group of scientists is on a quest to defy mainstream science and prove that human history was rocked with catastrophic moments when space changed history.”

This group of folks believe that comet strikes have happened many times on Earth. The episode particularly focuses on some Biblical events these guys believe were the result of these comet strikes. The Noah flood is one of the prominent examples explored here. This stuff is pretty controversial and highly interpretive.

Each episode is presented in a 1.78:1 aspect ratio. The 1080p image is brought to you through anAVC/MPEG-4 codec. The bit rate can climb as high as 40 mbps. It’s this brilliant picture quality that will drive you to want to own this collection. You would expect the CG stuff to be rather clean and high in detail. Even the vintage footage looks about as clean as I’ve ever seen it. Colors are bright and dazzling. Black levels are solid and provide incredible levels of shadow definition.

When History released the complete season set last year, I was convinced the series might have been wrapping up. Turns out a sixth season has been released, and it looks like more are on the way. It’s a good news/bad news kind of thing here. The good news is that the show is one of the highest quality documentary shows on television. There’s a wealth of education and entertainment to be found along with solid production values. The bad news is the cost of such production values means the show recycles a lot of the images and scenarios…A LOT. By season six I’ve seen some of this stuff a half dozen times already. It might be time to say goodbye or put a few more bucks into the project and roll out more completely original episodes. As it is not a single episode in this collection is free from repeated material. So as the series continues, I find myself wondering: “Are the darkest hours behind us? Or lurking in the distant future?”

Gino Sassani is a member of the Southeastern Film Critic's Association (SEFCA). He is a film and television critic based in Tampa, Florida. He's also the Senior Editor here at Upcomingdiscs. Gino started reviewing films in the early 1990's as a segment of his local television show Focus. He's an award-winning recording artist for Omega Records. Gino is currently working on his 8th album Merchants & Mercenaries. Gino took over Upcomingdiscs Dec 1, 2008. He works out of a home theater he calls The Reel World. Favorite films: The Godfather, The Godfather Part II, The Body Snatcher (Val Lewton film with Karloff and Lugosi, not the pod people film), Unforgiven, Gladiator, The Lion King, Jaws, Son Of Frankenstein, The Good, The Bad And The Ugly, and Monsters, Inc.
The Dictator Flashpoint: The Fourth Season