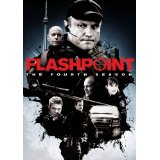 As one progresses as a reviewer, we come into contact with a wide variety of television shows. Some shows we even come to appreciate season after season. So, after I reviewed season 1 and 2 of Flashpoint, I was a little disappointed that I missed season 3. Later on, I would catch up obviously, but I was more than delighted to take on Season 4 when it came to my door. Thankfully, I was able to pick right up and continue to watch one of my very favorite shows of the last 5 years.

Since this site did not review Season 3, it is only fair that I recap the last few episodes before we break into the most recent string of episodes. The Other Lane saw Ed Lane’s brother Roy get caught up on the wrong side of the law. Jumping at Shadows saw a family under witness protection be exposed by corrupt police officers. Meanwhile, team leader Greg (played by Enrico Colantoni) gets to see his son Dean. Finally, Acceptable Risk puts the team under a microscope for spending too long on a killing spree.

All this time, we also learn that Ed (played by Hugh Dillon) is going through family troubles with his wife, Sophie who is deep into labor. It causes Sophie to leave for her mother’s and she spends the rest of her pregnancy there along with their son. This is later resolved in season four during Fault Lines/Personal Effects double episode when she goes into labor.

But this double episode is the true turning point in the season. In addition to baby woes, a military psychologist probes the team for cracks in their structure as part of a routine evaluation. The situation is eventually resolved but it causes a lot of fallout in almost all directions. The most obvious situation, Jules (played by Amy Jo Johnson) and Sam (played by David Paetkau) start having sparks again which goes into an all too familiar romance.

On top of that, Greg is often questioned as a suitable team leader and at times he is not always sure he can stay at top of the squad. We also learn more about Wordy (played by Michael Cram) who has largely been in the background during the first 40ish episodes. But perhaps the most improved character of the series has to be the team demolitions and tech expert, Spike Scarlatti (played by Sergio Di Zio).

In addition to becoming one of the standouts of the team, Spike also goes through some emotional anguish of his own as he deals with dying father who wants nothing more than his son to quit the team. In addition, the team also introduces a new member, Raf Rousseau (played by Cle Bennett), but this team member might have a reckless streak which could endanger the team.

In addition to a lot of emotional moments, we see a little bit of everything during negotiations and high intensity situations. We see a restaurant holdup (Terror), a man goes to brutal means to get money for his son who has leukemia(Thicker than Blood) and the usual assortment of scams, killing sprees, and robberies. It is a beautiful season and thirteen episodes is almost a case of ending too soon.

I am not afraid to mention that I really have to come to love this show. This show has remained under the radar for a long time but season four continues to bring out the best in the cast and continue for the immediate feature. There hardly is anything to be critical of and everybody remains a vital part of the cast. My only criticism would be that finally after all of this time, we finally learn something about Wordy. Why did this not come sooner, but then the same could be said of Spike.

Sixty-two episodes in, it looks like Flashpoint will return for one last season. So far in dvd land, with the release of season four, we have seen our way though fifty-one of those episodes. I am guessing we will probably see two more releases before they call it quits. What CBS calls season four is another great collection of thirteen episodes where certain supporting characters jump to the front line. The only sad part here is that we do say goodbye to one character but we do get to say hello to another.

The video and audio for this set remain strong and even though the extras are some what limited, it still provides us some candid moments that we would not normally get. For fans of the show, this is about as easy of a recommendation as we can get. Newbies really need to go back to season one to catch up on some history but the smarter casual fans can pick and choose which episodes to watch. This show is something special and I hope I am back for season five. Regardless, I will be watching.

Michael Durr has been reviewing movies for the better part of fifteen years now. He primarily enjoys thrillers, sci-fi, animation and even a little courtroom drama. His favorite films include Escape from New York, the Goonies and anything with Alyssa Milano. When he’s not praising Kurt Russell as the greatest actor of our time or scratching his head over a David Lynch flick, he’s spending time at home in Texas with his lovely wife, Lori and his amazing son. How they put up with him is a mystery, but even Basil Rathbone doesn’t have the time to solve that one.
The Universe: The Complete Season Six (Blu-ray) Vegas: The Third Season, Volume 1