The Secret World of Arrietty (Blu-ray) 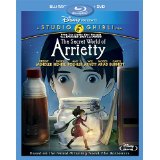 “It’s funny how you wake up each day and never really know if it will be one that will change your life forever. But that’s what this day was. The day I left the city to spend a week in the house where my mother grew up. A day I’ll never forget.”

The Secret World Of Arrietty comes from the collected works of English writer Mary Norton. The first book, The Borrowers, introduced us to the Clock family. They were a race of tiny humans known as Borrowers. They lived beneath the floorboards of normal-sized humans and lived off the things they could “borrow” from the human family. It was important to remain unseen or their lives would be in danger. The first book was published in 1952 and was followed by several sequels which continued the many adventures of the family and the fantasy world in which they lived.

This is not the first time the mythology of the Borrowers has arrived on film. A movie staring John Goodman was released in 1997. There were two British mini-series adaptations, and the characters or their like showed up occasionally in unauthorized versions of the mythology. With a rich mythology and fantasy element like this, it’s surprising that it took Walt Disney Studios so long to bring out an animated feature on the material. Walt himself once considered the stories and did, in fact allow it to influence some of their features, including The Gnome Mobile. This time Disney turned the project over to their Japan unit in cooperation with Japan’s Studio Ghibli.

Arrietty (Mendler) has just turned 14. She’s one of a family of three Borrowers who live under the floorboards of the Bean family. She is coming of age and about to embark on her first borrowing with her father, Pod (Arnett). Mother Homily (Poehler) is a professional worrier and is anxious about her first venture into the main house of the Beans. She is particularly worried because there is a new Bean arriving that day. He is Shawn (Henrie). Sean is a sickly boy who is about to undergo heart surgery and is staying in the country to get some fresh air and relax. For a time he’s under the watchful eye of Hara (Burnett). Arrietty accidentally shows herself to Shawn who now wants to be her friend. An uneasy relationship begins when he leaves her a sugar cube she dropped on their first encounter. Her parents warn her she must never reveal herself again or they must leave their home to find a new one. Of course, she does talk with Shawn and endangers the family when Hara is alerted to their presence.

I’ve never read the books, so I can’t speak to how faithfully the material is presented here. From what I do know it appears the basic concepts of Norton’s stories survives quite nicely. The themes of friendship against all odds is certainly front and center here. Shawn provides a strong character who begins as weak and is strengthened by his friendship with the impossibly tiny girl. The film’s plot and story remain quite simple and to the point. It’s obviously directed at the kids with short attention spans.

But what the film gives to the adults is the wonderful Anime animation that draws you into this world in a much more immersive experience than I would have expected. The animation is quite beautiful and captures the simple emotional aspects of the film perfectly. I admit that I have a very limited experience when it comes to Anime. There were some 1960’s cartoons that I enjoyed like Astro-Boy and Prince Planet. Obviously the style has come a long way and is certainly more mainstream. I doubt that it has ever been done quite as nicely as it is exhibited here. If you’re expecting more traditional Disney animation, you are likely to be disappointed. The box office crowd appeared to fall precisely into that category. At first, it did put me off more than a little. But if you allow yourself to take in the film after that first reaction, you will be rewarded with a rather entertaining story with wonderful atmosphere and mood.

One of the problems with the film is that it has been presented in three very distinctive ways. Each is very different from the other. There is the Japanese version, of course. Then there is the English language version, but it’s not that simple. You’ll find two very distinct English subtitles here. One translates the Japanese dialog, while the other repeats the English dialog. The stories are drastically different. While the basics remain, the dialog is not the same by a long shot. To make further complicate matters there are two different English language versions of the film out there with different voice casts. This release offers us the United States version which utilizes the talents of Disney Channel veterans Bridget Mendler and David Henrie as the two main characters. Carol Burnett is a huge stand-out as Hara. If you were to have seen the British English language versions those parts are played by Saoirse Ronan, Tom Holland as Sho instead of Shawn and Geraldine McEwan as Haru instead of Hera. If you’re confused at all by this, imagine how it might have had a huge impact on the various box office results.

Still, it’s a nice animated feature that gets a second chance on Blu-ray. It’s worth a look, to be sure.

The Secret World Of Arrietty is presented in its original aspect ratio of 1.85:1. The 1080p image is arrived at with an AVC MPEG-4 codec at an average 35 mbps. The picture is quite impressive. Colors really pop here, and the animation is given a wonderful environment to shine. There’s no question that Anime fans will have the sharpness and clarity to fully appreciate the stylish work here. You can really see the brush strokes of the artists and the black levels offer wonderful deep ink layers. This is as close to a perfect presentation as you are likely to see anywhere.

The DTS-HD Master Audio 5.1 is not quite so impressive as the video presentation but it works well enough to combine for a very nice high-definition experience. Dialog is the prominent thing here, and it is strong. There are some moments where ambients provide just the right subtle touch, but they do not dominate in any scenes. The music is delightful and dynamic enough to incite the appropriate moods.

There are two music videos:

Arrietty’s Song by Cecile Corbel and Summertime by Bridget Mendler.

The Making Of Summertime: (2:03) Mendler talks about writing the song and filming the video with plenty of behind-the-greenscreen shots.

This might be the kind of film that requires more than one screening to quite appreciate. I spent so much of the first viewing admiring the animation and image presentation that it was easy to get a little lost. Of course, I spent time on a second viewing trying to distinguish the differences of the two language versions but soon gave up that fight as hopeless. You have to be willing to get beyond your expectations and the baggage of the Disney label. It might take a few minutes, but it’s worth it. Hey, if I can do it anyone can. Of course, “a lesser Borrower would have panicked and run away”.

Gino Sassani is a member of the Southeastern Film Critic's Association (SEFCA). He is a film and television critic based in Tampa, Florida. He's also the Senior Editor here at Upcomingdiscs. Gino started reviewing films in the early 1990's as a segment of his local television show Focus. He's an award-winning recording artist for Omega Records. Gino is currently working on his 8th album Merchants & Mercenaries. Gino took over Upcomingdiscs Dec 1, 2008. He works out of a home theater he calls The Reel World. Favorite films: The Godfather, The Godfather Part II, The Body Snatcher (Val Lewton film with Karloff and Lugosi, not the pod people film), Unforgiven, Gladiator, The Lion King, Jaws, Son Of Frankenstein, The Good, The Bad And The Ugly, and Monsters, Inc.
95 Miles to Go 42nd Street Forever (Blu-ray)