The Adventures of Tintin (Blu-ray)

Posted in: Disc Reviews by David Annandale on May 28th, 2012 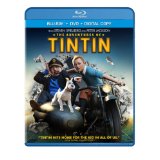 Steven Spielberg’s very-long-in-gestation adaptation of Hergé’s Tintin finally came into being over Christmas. The story, very much in keeping with the globe-trotting adventures of the comic books (drawing heavily, in fact, upon The Secret of the Unicorn), has Tintin (voiced by Jaime Bell) become embroiled in a treasure quest after buying a model ship that has one third of the secret concealed in its mast. Captured by nefarious evil-doers who will stop at nothing to find the treasure, he encounters Captain Haddock (Andy Serkis), and a legendary friendship is formed.

Spielberg’s affection for the character is present in every frame of the film, and the story hurtles along from location to location, our heroes making one hair’s breadth escape after another. The characters are all very recognizable versions of their 2D comic book incarnations, and the animation is stunning in its meticulous detail.

But that very detail is a bit of a problem in the long run. The film steers perilously close to the uncanny valley. The characters are just cartoonish enough to avoid being thoroughly creepy, but only just. The settings are so realistic that, when characters are no present, one can easily forget that one is watching an animated film. In which case, then, why make this an animated feature at all? Why not simply do a live-action version? Why not fully exploit the visual exaggeration and unreal joys that are the province of animation? There simply isn’t enough of that here. And even though everything looks eerily close to reality, the movements have a floaty, liquid, almost leisurely aspect to them that slows the pace down, despite the sheer volume of incidents, and robs figures of substance.

This is a very cheerful adventure, very eager to please, and hard film to dislike. I can’t help but feel, though, that it should have been either a more traditional animated feature, or live-action, rather than the somewhat uneasy (if gorgeous) hybrid that we see here.

Well, yes, it is certainly gorgeous. As ever, computer animation shows off the Blu-ray format, and vice versa. The genre and the format were made for each other. Every detail pops, and animation is the form that can never suffer from too much resolution. So every hair, every gleam of light, every wrinkle of fabric – everything is simply perfectly rendered by the transfer. The colours are sumptuous as well, and there is never a trace of grain. The AVC Codec registers a consistent 30-35 Mbps. And the aspect ratio is the original 2.35:1 anamorphic widescreen. All in all, then, the picture quality is beyond reproach. Whatever reservations I have with the artistic choices, I cannot fault their execution, and the disc is a wonder to behold. If you, on the other hand, don’t have the same problems I do with the mo-cap look, then you should be over the moon with the visuals. As for the 3D, I don’t have the equipment to judge it, or the effect it adds (or does not) to the movie. The 2D version looks just fine, though, and at no time did I feel that I left out, or encounter objects thrown at the camera for no reason other than the pop-out effect.

The audio is a solid match for the sound, but also demonstrates and interesting lean towards the subtle, at least as far as a Spielberg adventure movie goes. John Williams’ score over the opening credits is jazzy rather than bombastic. It is given a strong surround mix, but is never overpowering, radiating cool rather than frenzy. And so things go for the rest of the film: the environmental effects are good, and help complete the experience of the film, but they aren’t over the top. Somehow, there’s a laid-back quality to the mix. This isn’t a bad thing, necessarily, and there are moment where it most certainly is a good thing. But there are others where just a little bit more oomph would not have gone amiss.

The Making of Tintin: (96:20) Eleven featurettes are presented here, with the option of viewing them as a single, feature-length documentary. We being with a toast to Hergé as the production begins, and then move on to cover just about every aspect of the film, from animation to score. Very informative.

This is a nice film, and a very affectionate one. I did feel a bit distanced from it, primarily due to its style, but it remains an impressive technical achievement.