Without a Trace: The Complete Third Season

Posted in: Disc Reviews by Gino Sassani on June 1st, 2012 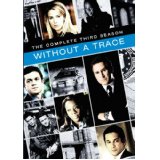 For most of the last decade or more CBS has dominated the primetime drama market on network television. One of the reasons, of course, has been the prevalence of top-flight crime dramas like the NCIS and CSI franchises. From 2003 until 2009 the Thursday line-up on the eye network included the blockbuster pairing of the original CSI and Without A Trace. Both were products of filmmaker Jerry Bruckheimer’s television stable. While CSI focused on the science behind a criminal investigation, Without A Trace took the more traditional route of the human element to the FBI’s Missing Persons Unit.

Jack Malone (LaPaglia) was the tough-as-nails head of the unit. He had a degree in psychology and acted very much like a profiler at times. It was his job to direct the investigation unit. The team consisted of Vivian Johnson (Jean-Baptiste). She was a veteran officer and Jack’s right hand. Danny Taylor (Muciano) had changed his last name to escape his family roots which included a habitual criminal brother and an abusive father. The unit was his way of starting a new life. Martin Fitzgerald (Close) was the son of a powerful senator and was always fighting to prove himself on his own merits. Samantha Spade (Montgomery) was the young attractive young woman on the team who had already had an affair with the married Jack but also had romantic ties to Martin. Unfortunately, she didn’t do much to break the vulnerable female role.

Each episode started with a person disappearing. We see the last moments before they went missing. They would fade away in the opening teaser. After the first commercial break we would usually find the team on the scene of the disappearance as the investigation kicked into high gear. They would talk to the people in their lives and create a timeline on a whiteboard based on the information they gathered. All the while they would attempt to piece together the person’s state of mind as well as who might have harmed or taken them. Often these people were running from something. As each act begins the screen would tell us how many hours the person had been missing to that point.

The show lasted for seven seasons before it was replaced with Criminal Minds that continued the domination with CSI to the current day. The series was always a pretty good ratings winner, although much of that success can be attributed to the strong lead-in from CSI. They both appealed to the same kind of audience and worked well together as bookend shows.

The third season picks up shortly after the dramatic conclusion of the second where Samantha had been shot. Now she’s dealing with the emotional aspects of the events. It doesn’t help that her first case back requires that she take out a suspect with her gun. Jack’s wife wants to move to Chicago, and while she is taking the kids, she decides she doesn’t want Jack to follow. Vivian has a heart condition. While these personal elements tie the season together, it’s not why you should be watching.

The reason for watching is the quality of the show itself. Each case is unique and interesting for its own reason. Just in time for the release of Men In Black 3 comes an episode where the missing person is running from that mythical organization. He thinks both aliens and the men in black are out to get him. The guest star missing person here is T.J. Thyne who now plays Hodges on Bones. It’s one of the better guest stints of the series. Not to be outdone, however, is Martin Landau, who appears on a few episodes as Jack’s father suffering from Alzheimer’s. He got himself an Emmy for the portrayal, and it’s well deserved. The set resolves the second season episode Doppelganger where the team is up against a set of identical twins. One or both of them is a cold-blooded killer. In the original episode the team had to settle with arresting the wrong guy but unable to prove it. In this episode, appropriately titled Doppelganger II the plot is resolved. Other cases involve Nazi war criminals, autistic children, and sex slave traders.

It’s absolutely worth the look and was one of my favorite dramas of the time. It always ended up on my recorded list to catch when I had the time.

Each episode of is presented in a 1.78:1 aspect ratio. This is a nice transfer that seems to work almost all the way around. Colors are near perfect reference, particularly flesh tones. Black levels are nicely rendered, adding a depth of detail to the darker scenes. It is actually some of the better lit daylight scenes which show any of the flaws. It is here that I believe you’ll find the strongest hints of any compression artifact.

The Dolby Digital 2.0 track is really just there to service the dialog. The show features music montage moments, usually to a pop ballad. These aren’t going to blow your socks off, but the atmosphere they invoke remains.

The first two seasons had been released some time ago, and it appeared that the DVD releases had ended, leaving fans with empty places on their DVD shelves that might never have been filled. Warner has now picked the ball back up through the Archive releases. It looks just as good as the earlier titles looked. It is my hope that they continue to carry the ball until they’ve delivered all seven seasons. The show deserves that much. Fans have been fighting to get their hands on these DVD’s. “It shouldn’t have to be a fight.”

Gino Sassani is a member of the Southeastern Film Critic's Association (SEFCA). He is a film and television critic based in Tampa, Florida. He's also the Senior Editor here at Upcomingdiscs. Gino started reviewing films in the early 1990's as a segment of his local television show Focus. He's an award-winning recording artist for Omega Records. Gino is currently working on his 8th album Merchants & Mercenaries. Gino took over Upcomingdiscs Dec 1, 2008. He works out of a home theater he calls The Reel World. Favorite films: The Godfather, The Godfather Part II, The Body Snatcher (Val Lewton film with Karloff and Lugosi, not the pod people film), Unforgiven, Gladiator, The Lion King, Jaws, Son Of Frankenstein, The Good, The Bad And The Ugly, and Monsters, Inc.
Beyond (Blu-ray) Snow White and the Huntsman