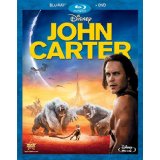 “When I saw you, I believed it was a sign… that something new can come into this world.”

John Carter first appeared in Edgar Rice Burroughs’ Barsoom magazine serial nearly a century ago in 1912. The science fiction pioneering Carter stories captured the imagination of masses and inspired countless authors and directors. For example, George Lucas himself has stated there would be no Star Wars without John Carter of Mars. It took nearly a century to get it to screen and in time countless others have mined the series for inspiration. The result is a massive “been there done that” experience.

If that were the only fault of this movie it could be forgivable, because essentially it’s not Burroughs’ fault his story has been plagiarized myriad times. The problems come from the plodding exposition-heavy script, the horrible miss casting of Taylor Kitsh as John Carter, the cheesetastic special effects (which are even more cartoony than the Star Wars prequels) and the uninspired art design and costuming.

John Carter is a disheartened and confrontational Confederate Soldier still grieving the loss of his wife. While seeking a fortune in gold in some sacred cave in the wild west, he finds evidence of ancient aliens. Before you know it, he is transported to Mars, or Barsoom as the natives call it. He discovers his bone structure gives him super powers in the light gravity of the Red Planet. First and foremost he can defy gravity and leap incredible distances. This catches the eye of Tars Tarkus (Willem Dafoe), leader of the six-limbed, lizard-skinned Thark warriors.

Soon Carter is caught up in a global civil war between three warring tribes on Mars (two of which are human?!?). He saves and falls for Princess Dejah (Lynn Collins). He agrees to help her prevent her marriage to her enemy Sab Than (Dominic West) if she will help him return to Earth. There is also some nonsense about Matai Shang (Mark Strong), leader of the Holy Thern who are the Goddess angels manipulating the wars on Mars, but this really never makes much sense.

The script is so dense with back-story mythology it feels like a goofy history lesson from some cheesy fifties sci-fi matinee. This is animation director Andrew Stanton’s (Wall-E) first live action film; perhaps he should go back to the drawing board… literally.  This movie will lose so much money for Disney. This is what they got for a $250 million dollar budget?!? Really? Disney stocks are going to take a hit from this.

So many things are wrong with this movie. It was horribly promoted. The premise is so outdated and dense that potential audiences will have no idea what it is about unless they are familiar with the books. Taylor Kitsch plays John Carter with all the nuances of a professional model. He attempts a poor imitation of Clint Eastwood and fails epically. They insert some nonsense about Edgar Rice Burroughs being John Carter’s nephew which only adds more meaningless back story to an already overlong script. Even the 3D is listless and uninspired. On the good side John Carter does have moments of beauty, presenting the sweeping vistas of Mars and they basically reunite Julius Caesar and Mark Antony  from HBO’s Rome as King Tardos Mors (Ciarán Hinds) and his right hand man Kantos Kan (James Purefoy).

John Carter is presented in its original aspect ratio of 2.40:1. The 1080p image is arrived at with an AVC MPEG-4 codec at an average 35 mbps. The high definition image presentation is certainly an impressive thing to behold. Colors stand out particularly the reds and blues of the Martian costumes. The computer work blends quite nicely with the live action production. CG characters have come a long way and now hold up well to such high definition scrutiny. Whatever you might think of the film itself, it’s the most ambitious visual presentation to date. At least you’ll still have those Wow moments to show off your equipment.

The DTS-HD Master Audio 7.1 is a powerful companion to the visuals. I did catch a couple of distorting moments. These were also present in the theatrical presentation so I suspect they were intentional, or at least the Blu-ray presentation is consistent with the source material. Dialog cuts through just fine even if Carter’s words don’t project as much as I would have liked. There’s plenty of ear candy to keep your senses engaged.

There is an Audio Commentary with Director Andrew Stanton and Producers Jim Morris & Lindsey Collins. Stanton is particularly infectious with his passion and enthusiasm for the project. You can tell he’s a genuine fan of the material. It’s loaded with plenty of inside information and helps to understand the various choices made for the film.

Disney Second Scene: This is the picture in picture mode that brings many of the behind the scenes items into the viewing of the film itself. Much of this is more interesting than the film itself.

Deleted Scenes: (19:02) There are 10 with an optional commentary and introduction from Andrew Stanton. There is also a handy play all option. The scenes are in various stages of production. Some require storyboards while others show the motion capture actors instead of the computer generated characters.

360 Degrees Of John Carter: (34:32) This is a production diary that follows one day on the set of the production from morning until end of shoot for the day. It covers everything from craft services to the extras killing time between scenes.

The movie drags and drags. I found myself yawning and fighting off sleep a number of times. You simply aren’t given enough reason to care about John Carter or the warring civilizations of Mars. If you are an undiscerning fan of cartoon CGI spectacles or a serious fan of the books you may find this worth the ticket price; otherwise save your money, stay home and re-watch Avatar.