Posted in: Disc Reviews by Gino Sassani on June 6th, 2012 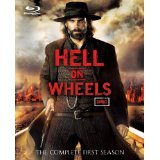 With a statement like that, how can you not want to check out AMC’s newest drama series Hell On Wheels? I’ve been told the title sounds like it’s about motorcycle gangs, and I couldn’t agree more. The term refers to the mobile tent city that housed the workers on the Union Pacific Railroad and the support entourage the camp attracted. It was a virtual tent city that had all of the essentials: a church, bar, and whorehouse. It was just after the Civil War, and the American government believed that a railroad connecting the East and West coasts was just the kind of project the country needed to pull back together and heal still-festering wounds. As one of the filmmakers accurately points out, this was the Apollo moon project of the day. Long believed impossible by the brightest engineers of the day, the railroad would cut the time it took to go from coast to coast from six months to just under seven days. It was a truly remarkable feat, and it carried with it more than a fair dosage of corruption and blood. Now AMC has brought those days from 1865 back to our television screen with an ambitious and smartly produced series. It’s a must see.

“Hell On Wheels – Population: One Less Every Day.”

Cullen Bohannon (Mount) fought with the Confederacy in the just-concluded Civil War. For him the war will never be over, but it isn’t about state pride or slavery that he still fights. He freed his own slaves a year before the conflict began. During the war a regiment of Union soldiers raped, tortured and murdered his wife and set his home on fire, killing his young son. Now he’s tracking the scattered members of the regiment down one by one and killing them. He joins the working crew on the Union & Pacific Railroad to get to more of his prey.

The story also involves many other colorful and essential characters to round out the drama. Here is AMC’s own description of those characters:

Lily Bell is a newly widowed woman trying to survive in a man’s world. After the death of her husband, Lily continues to wrestle with the idea of the railroad being the end of the West. She feels a connection to the pristine landscape and worries that the approaching railroad and Hell On Wheels will despoil the West forever. What starts out as a desire to fulfill her husband’s dream ultimately becomes her own dream, and she slowly gains respect in a world where even the toughest of men would fail.

Thomas “Doc” Durant, based on a real life character, is a greedy entrepreneur taking full advantage of the changing times. As the railroad comes closer to completion and he becomes rich beyond his wildest dreams, he becomes more and more concerned about his place in history.

Elam Ferguson is an emancipated slave working to achieve true freedom in a world entrenched in prejudice. Elam struggles to come to terms with who and what he is: half white and half black. He doesn’t feel at home in either world. The one thing he knows is that he refuses to be treated as anything less than a man. As he rises to a position of power in the railroad hierarchy, he finds trouble. Elam’s and Cullen’s fates continue to be bound together, not only by their common Southern roots, but also by circumstances.

Joseph struggles with the difference between his cultural heritage and the ever-changing world around him. He tries to bring his people into the reservation, and although he hates the idea, hopes his people’s safety can be guaranteed.

Reverend Cole’s journey is mainly concerned with avoiding a war with the Indians, a war he knows they cannot win. After riding with John Brown in Kansas and serving as a minister for the Union Army in the Civil War, Cole is sick of the slaughter; he genuinely wants to help the whites and Indians avoid another war and he sees Joseph as a means to this end. Cole struggles with his own personal demons while preaching a path of peace.

As young Irish immigrant brothers heading to the West to find their fortune, cracks develop in Sean and Mickey’s relationship as they exploit business opportunities in Hell on Wheels, using more and more underhanded tactics. Mickey eventually questions what Sean is doing and resents his brother using him as a pawn.

Thor “The Swede” Gundersen is Thomas Durant’s ruthless head of security. The Swede’s tactics help him maintain a degree of control over chaotic Hell on Wheels, but he abuses his power to extort money from its residents. The Swede suspects that Cullen Bohannon is a murderer and schemes to prove it.

The series reveals itself to be one about revenge, and Bohannon’s drive is certainly fueled by those strong motivations. Surprisingly little of the show’s time is actually spent on revenge. Along the way Bohannon finds more worthy fights and new reasons to look toward the future instead of the past. While his drive never goes away, and I suspect it never will, Bohannon is slowly building for a future that might hold promise. It’s really about the evolution of a man. The result is a highly complex character that reveals a little more of himself each week that we tune in. Anson Mount handles these moments with one hell of an amazing performance. Add to that the impressive cast that surrounds him and this is more than a period piece Western. The themes and stories strike today just as much as they might have in 1865. There’s not a weak link in the cast, and you’ll find their stories compelling enough to keep you coming back for more.

In case good human drama isn’t quite enough to keep you coming back for more, this series offers some of the strongest production design on television. The production takes over a massive Indian reservation in Canada, and the tent city is pretty much built as it would have been then. It’s spread out in reality just as it is in the series. A happy accident found the crew knee-deep in some of the wettest weather the area’s seen in recent memory. The climate has left the area muddy and quite gritty. The result makes the efforts of the crew to transport you into an authentic setting work that much more.

If I have a complaint at all, it’s a small one indeed. The show is an ambitious one but there are episodes that take us too far away from the central themes and action. One in particular is dominated by a boxing match which was engineered by Durant to distract the workers from a pay delay. It serves its purpose, perhaps too well, and ends up distracting us from the stuff we really want to see. I suspect the series takes tremendous time, and it might be hard for the cast and crew to completely keep up with a production schedule without these kinds of lulls in the story. Fortunately, they are few and the episodes usually pack a lot of story into under 50 minutes of running time.

Part of the reason of the show’s quality has to be the result of John Shiban being such a huge part of it all. Fans know his work on The X-Files. He swooped in and tried to save Star Trek: Enterprise giving that series its best season. He’s been a huge part of Supernatural and Threat Matrix. It’s nice to see him throw off his genre label and deliver something entirely different. You will notice a ton of Star Trek and Stargate actors throughout the show.

The DTS-HD Master Audio 5.1 makes fine use of the surround field. There are plenty of very clear background sounds that bring you closer into this 1865 world. It might be distant horses walking in the mud or the sounds of a bird from the nearby wilderness. When there are large action sequences we get the in-your-face sounds, yet still retain the subtle nature of the time and place. Dialog is just fine, and the score rarely intrudes. Subs rear their thundering sounds from time to time as well. It can all be found in a very dynamic crystal-clear audio presentation.

Recreating The Past – Making Hell On Wheels: (16:54) This is a very nice nod to the crew members, who don’t often get much face time on these things. Various members of the crew introduce themselves and talk about their jobs and departments.

Crashing A Train: (3:25) The same crew members focus on a train derailment scene.

Collection Of Making Of Featurettes: (33:26) There is a play all that allows you to watch this as one feature. The segments include: About Hell On Wheels, The Guns, The Wardrobe, The Meaning Of The Railroad, Building The Train, Locations And Sets and Dirty Medicine.

Episode Features: (52:41) There is a production diary for each episode. The handy play all allows you to see it all as one piece.

Cast And Character Features: (12:52) Many of the main characters get short profile pieces here

Behind The Scenes Footage: (24:36) This is raw behind-the-scenes stuff with no narration or interview material.

The show was a companion piece with The Walking Dead for a while. I’m sure that show helped to lure folks into watching this one. Once you’ve seen a few minutes, however, you’ll be hooked. It returns in August, and I might just have to make time to keep an eye on it rather than wait for the discs as I most often do. Whatever you do, take the time to check this one out, “That is, if you’re not too busy killing anyone.”

Gino Sassani is a member of the Southeastern Film Critic's Association (SEFCA). He is a film and television critic based in Tampa, Florida. He's also the Senior Editor here at Upcomingdiscs. Gino started reviewing films in the early 1990's as a segment of his local television show Focus. He's an award-winning recording artist for Omega Records. Gino is currently working on his 8th album Merchants & Mercenaries. Gino took over Upcomingdiscs Dec 1, 2008. He works out of a home theater he calls The Reel World. Favorite films: The Godfather, The Godfather Part II, The Body Snatcher (Val Lewton film with Karloff and Lugosi, not the pod people film), Unforgiven, Gladiator, The Lion King, Jaws, Son Of Frankenstein, The Good, The Bad And The Ugly, and Monsters, Inc.
John Carter (Blu-ray) Prometheus