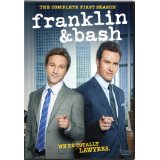 “The law was made by rich white people. Our job isn’t to follow the law. Our job is to make the law.”

TNT brings us a different kind of legal drama with the first season of Franklin & Bash. These are a couple of young lawyers who don’t let the courtroom rules get in the way of helping out their client. They’ve gotten themselves quite a reputation, and it’s finally paying off.

Meet Jared Franklin (Meyer) and Peter Bash (Gosselaar). They’ve been running a fledgling law firm out of the house where they both live along with investigator Carmen (Davis) and agoraphobic lawyer Pindar (Nanjiani). The house is also party central where the booze and women are always in abundance. The law practice, however, isn’t paying the bills, so they aren’t opposed to a little ambulance chasing.

In the pilot they’re sitting on a street corner where a video board shows an advertisement of a barely-clothed model. When the inevitable distracted driver crashes, they take on his case against the ad agency. They win by having a witness disrobe in court and asking everyone to remember what she had been saying. Distraction proven. You’d think the opposing attorney would be upset. Instead Stanton Infeld (McDowell) hires the creative duo to his huge corporate law firm much to the chagrin of his nephew and judge wannabe Damien Karp (Diamond). Stanton wants to shake things up, and that’s exactly what he gets.

The show is populated with solid actors and characters. Foremost in the actor department has to be Malcolm McDowell as the head of the firm Stanton Infeld. McDowell is a welcome face to series television and brings instant charisma to the role. He’s a stodgy old-timer who very much wants to be a lot cooler. He sees a little of what he wished he’d been as a youth in Franklin and Bash. Folks remember Mark-Paul Gosselaar from his days as Dennis Franz’s partner on NYPD Blue. Here he gets to let his hair down a bit more and just let go. The chemistry with Breckin Meyer is fantastic, and the whole show has a rare energy that makes it fun to tune in. Reed Diamond is a television veteran. My first look at him came back in the Homicide: Life On The Streets days where he played the troubled Kellerman. He also had one of the shortest but most impactful roles on The Shield. He plays the informant in the Strike Team who gets taken out by Vic in the pilot episode. It’s considered one of the most dramatic scenes in television history. Who can forget the look between the two? Here he gets to play a stuffy “by the book” lawyer, representing the more traditional roles in the show. Kurmail Nanjiani is the comic relief in a show that is pretty funny all the way through. He’s afraid to leave the house and usually communicates by video link. He’s a sci-fi geek and a much more convincing OCD than Monk ever was.

What we get is some solid courtroom drama with a lighter touch. Let’s face it. The only genre more overexposed today than legal dramas is cop shows. It’s pretty hard to imagine that anyone can give us something that we haven’t seen a hundred times before. But that’s exactly what we get with Franklin & Bash. While the cases might not always be the most original, you can bet your savings that their approach will be quite fresh and creative. Of course, these guys could never really get away with most of this stuff but it doesn’t make it any less entertaining to watch. It beats the surprise witness at the last second…oh wait… they’ve done that one too. Okay, but it’s much funnier Franklin & Bash style.

Each episode is presented in its original broadcast widescreen format. Everything looks pretty average here. The L.A. exteriors are flashy and often full of color that works well on the transfer. Compression issues do exist but are kept to a minimum.

The Dolby Digital 5.1 track is pretty simple. We get dialog and some music cues.

Friendship: 1:59) The guys talk about the show’s bromance factor.

Behind The Scenes: (3:58) At four minutes you can’t get too far behind the scenes. There are short bits on the show’s basic themes and the characters.

Creating The Cases: (3:23) The producers step in and talk about the show.

Behind The Behind: (1:12) A mercifully short piece on the Gosselaar naked butt scene.

Tommy Chong As Your Pot Judge: (3>11) One of the best guest roles is Tommy as a judge who is very strict against pot. Here’s a closer look.

The truth is that almost every story out there has already been done. If you believe that, then the rest of our entertainment days appear rather bleak. Then along comes Franklin & Bash to brighten our days. It’s not a great show. I’m not even sure if it’s a very good show. I just know it was a very entertaining show. One of those times where my job was merely to be entertained. “Not a bad life, huh?”

Gino Sassani is a member of the Southeastern Film Critic's Association (SEFCA). He is a film and television critic based in Tampa, Florida. He's also the Senior Editor here at Upcomingdiscs. Gino started reviewing films in the early 1990's as a segment of his local television show Focus. He's an award-winning recording artist for Omega Records. Gino is currently working on his 8th album Merchants & Mercenaries. Gino took over Upcomingdiscs Dec 1, 2008. He works out of a home theater he calls The Reel World. Favorite films: The Godfather, The Godfather Part II, The Body Snatcher (Val Lewton film with Karloff and Lugosi, not the pod people film), Unforgiven, Gladiator, The Lion King, Jaws, Son Of Frankenstein, The Good, The Bad And The Ugly, and Monsters, Inc.
The Jerk Theory American Independence Week Contest: WWII In HD on Blu-ray From A&E/History