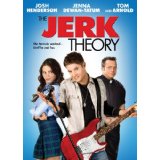 The notion that nice guys finish last — or that girls tend to gravitate toward bad boys — isn’t exactly the most original idea in the world. There have been many cinematic examples that both support (The Last American Virgin) and debunk (Bridget Jones’s Diary) this theory. The Jerk Theory — a totally formulaic, surprisingly watchable “teen” comedy where most of the actors are pushing 30 — wants to be the movie that proves not every girl in the world wants a bad boy. Instead, the movie inadvertently makes the point that every girl in the world (except maybe one) wants a bad boy.

It’s no more Mr. Nice Guy for Adam (Josh Henderson) after his girlfriend dumps him in favor of their school’s resident jerky jock. We meet Adam after he’s already re-invented himself as the kind of popular lothario who will barely stop his car to allow his date to get in and puts on impromptu rock concerts at his high school.  Adam successfully counsels fellow nice guys in the ways of jackassery, but begins to reconsider his philosophy when his charms fail to work on Molly (Jenna Dewan-Tatum), who has sworn off jerks after recently breaking up with one. Will Adam’s jerky veneer give way in time for Molly to see what a genuinely nice guy he is? Will there be contrived misunderstandings before a final-act declaration of love? (This is a romantic comedy — what do you think?!)

And yet the movie is more entertaining than it has any right to be, thanks mostly to a group of likable performers who help compensate for a thin script that was clearly written by someone who’s been burned in the past. (Abraham Taylor, co-producer and co-writer along with director Scott S. Anderson, actually plays jerky jock Dixon.) The script is particularly cruel to women who, with one exception, are portrayed as morons who can’t help swooning for guys that treat them horribly. I cut the movie the slightest bit of slack in this regard because we’re talking about immature high school girls, and because the movie takes place in a somewhat heightened reality with after school rock concerts and where Tom Arnold is allowed to teach at a Catholic school.

Henderson, currently starring in the newest version of Dallas, has an especially tricky task in convincing us Adam is worth rooting for, since we only get a brief glimpse of his nice guy past. He pulls off both the jerky and nice guy sides of Adam convincingly and even makes for a decent pop-punk frontman. (Most of the songs featured in the film are from Henderson’s debut album, and they actually help serve the story.) Dewan-Tatum is stunning, but the actress is easy to like because she’s been handed a gift: she gets to play the only female in the movie with any sense. Still, it’s Jesse Heiman (as Clinton, a clueless, desperate, oddly likable band mate of Adam’s) who steals every scene he’s in. He’s willing to try anything to get a girl, whether it’s acting like a black guy, a Cuban guy, a gay guy or Luke Perry in 8 Seconds. (Bonus points for that last semi-obscure reference.)

Arnold is a bit forced, but ultimately harmless as an accidentally inappropriate priest in the world’s most lax Catholic school. (The dress code is non-existent and there appears to be a heavy emphasis on sex education.) Also, Danny Bonaduce inexplicably pops by as himself and pokes fun at his real-life transgressions. Bonaduce’s character visits the school and speaks out against casual sex as part of his community service, and I couldn’t help but wonder if Bonaduce had been similarly sentenced to appear in this movie.

The Jerk Theory has problems. There’s a documentary conceit that is absolutely unnecessary until one of the characters’ camera captures a crucial encounter. More importantly, the movie doesn’t spend much time trying to figure out why girls go for jerks. (In a behind-the-scenes doc on the DVD, Taylor makes the point that if something comes too easily or too naturally, we are less likely to appreciate it. How about putting that insight into your script?!)

Then again, at a breezy 94 minutes, this little-seen film is really no more painful than much splashier romantic comedies (over)stuffed with much bigger stars that audiences endure in theaters.