The Weight of the Nation 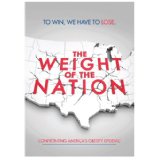 “More than two out of three U.S. adults are overweight or obese. During the past 30 years, adult obesity rates have doubled.”

After watching this documentary — developed with the Institute of Medicine, in association with the Centers for Disease Control and Prevention as well as the National Institutes of Health, and in partnership with Kaiser Permanente and the Michael & Susan Dell Foundation —  I feel like I should be typing this review while walking on a treadmill instead of planted on my couch like a lazy lump.

The Weight of the Nation aired in four parts — “Consequences”, “Choices”, “Children in Crisis” and “Challenges” — on HBO in May and presents testimony from a staggering roster of scientists, legislators, educators and regular folks of all ages who are obese and resent being defined by their weight. As a result, the documentary features incredibly smart people who are not so deluded as to believe they can cure or completely eliminate obesity. Instead, the major focus is on prevention and the causes of obesity beyond “Eating Too Much.”

Each of the four parts features a healthy amount of alarming statistics, but “Consequences” is, naturally, a little more numbers-heavy. (Just to cherry pick one, courtesy of the Bogalusa Heart Study in Louisiana: only seven percent of non-obese kids become obese adults, while 77% of obese children become obese adults.) Eventually, the obesity data in talking head interviews with Professor This Guy and Doctor That Woman kind of blend and drone into one another. I appreciated the inclusion of a few economic statistics (obesity-related reductions in productivity result in more than $70 billion in costs to American businesses every year) and personal stories (Dan Hanley, a diabetic amputee, and his supportive wife Mary) as a respite from having all these scientists find a dozen ways to tell us how fat we are as a country.

“Choices” is probably the most engaging of the four parts and attempts to answer the question of “What Can I Do?” In short, the answer is as unsexy as the documentary’s constant barrage of data: set realistic goals, take small steps, control your portions and increase physical activity. (Keeping the weight off is a more complicated matter.) Although the segment on bariatric surgery was an eye-opener and I enjoyed the takedown of fad diets (“The diet industry has no reason to solve the problem. Solving the problem puts them out of business”), it was once again the testimony from regular people — a woman named Vivia refers to food as her “best friend, boyfriend” — that left a lasting impression.

The documentary’s generally clinical approach actually served “Children in Crisis” well and kept the material from getting manipulative. Though a few overweight kids are featured, the focus here is on unhealthy options in school cafeterias combined with the lack of physical education. (The latter cause has a passionate champion in Texas Comptroller Susan Combs, barely concealing her rage and frustration.) The doc also examines the way companies directly market unhealthy food to children, though I would’ve liked that exploration to be a little less one-sided. (Poor, defenseless Big Business didn’t even get a chance to have its say.) “Challenges” was intriguing for the way it focused on the evolutionary factors that resulted in America’s obesity crisis, but ended on somewhat of an upswing by highlighting a few instances of progress across the country. (Like Mayor Karl Dean and his initiatives in Nashville.) As one expert states toward the end, “the weight of the nation is out of control, but we can fix it.”

At the end of the day, this informative documentary has its heart in the right place, but is not nearly dynamic enough to truly inspire change. Instead of strapping on your running shoes and going for a jog, you’re just more likely to feel even guiltier about downing a bottle of soda or juice instead of a glass of water.

The Weight of the Nation is presented in an aspect ratio of 1.78.1. Like the rest of the documentary, there isn’t a lot of glamor to be found in the video presentation. A lot of the talking head interviews with experts and b-roll footage takes place in doctor’s offices with fluorescent lights, and that harshness comes across well. The color and contrast is mostly (suitably) muted, except in the interviews with regular folks that take place in a stark white set and seem sharper. There are also a few jaunty graphics that pop up from time to time, but director Dan Chaykin doesn’t go over the top with them. (Ala the cheekier Morgan Spurlock.)

The Dolby Digital 2.0 does an excellent job of delivering everything that is said during the many interviews in a clear and audible way, but isn’t asked to do much more. The musical score is minimal and unobtrusive, and there isn’t much in the way of atmospheric sounds to report. (There’s a bit of background noise from the speakers during scenes in a crowded cafeteria or when kids are playing outside, but even those sounds are eventually overridden by the voice-over interviews.)

Bonus Shorts: You know how documentarians always talk about how they had to pare down dozens (or even hundreds) of hours of footage for their final cut? Well, The Weight of the Nation is no different. There is more than four hours of additional material here, providing a more in-depth look at subjects the finished doc only touches upon. Here’s a list of the 12 bonus shorts, which range in length from eight to 30 minutes:

Healthy Mom, Healthy Baby: The Risks of Excess Weight
Obesity and Type 2 Diabetes
Latino Health Access: A Model of Community Action
Nashville Takes Action: A City Battles Obesity
Can a Lifetime of Excess Weight Lead to Heart Disease?
Poverty and Obesity: When Healthy Food Isn’t An Option
Stigma: The Human Cost of Obesity
Overweight in the Workplace: How Wellness Programs Can Help the American Workforce
The Quest to Understand the Biology of Weight Loss
Is Weight Something We Inherit?
Healthy Foods and Obesity Prevention: Increasing Markets for Fruit and Vegetable Farmers
Obesity Research and the National Institute of Health

The Weight of the Nation does a solid job of presenting the economic, biological, evolutionary, genetic, physiological and psychological factors that have contributed to the obesity crisis. The documentary is also starkly honest about how difficult it’s going to be to turn things around.

Watching the four segments back to back made some of the information seem a bit redundant. (It aired over two nights on HBO.) However, the DVD presentation gives you the option to watch them separately and at your leisure. (Disc 1 contains “Consequences” and “Choices”, while Disc 2 features “Children in Crisis” and “Challenges.” Disc 3 contains the Bonus Shorts) More importantly, the shorts are a very valuable tool, expanding on worthy topics that inevitably got glossed over in a documentary that was already more than four hours long.

I see this DVD set as something that could be shown in schools, rather than something you’d Netflix and watch with a bowl of popcorn. (You might be rethinking that popcorn.)