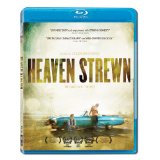 We all have That Friend. We’ve known him/her most of our lives, and he/she was a perpetual screw-up even when we were kids. We hoped they’d grow out of it as adults, but they always seem to rope us into their drama or cockamamie schemes. Yet we can’t completely cut them off because, even if it’s sometimes hard to remember why you’re still friends, it’s hard to get rid of anything that’s been a part of our lives for so long. And if you don’t know what I’m talking about, I regret to inform you that you probably are That Friend.

In Heaven Strewn, Mickey (Wyatt Denny) is That Friend, a small-time counterfeiter looking to recover his losses from a botched transaction. Jasper (Rob Tepper) is the more responsible buddy who gets drawn into accompanying Mickey on his ill-advised quest. Mickey has one too many DUI’s and needs Jasper to drive him to the spot where the cash will be buried. To convince Jasper to come, Mickey lies and says they’re going meteorite hunting.

This modestly-scaled character piece establishes a confident, deliberate pace early on as writer/director/producer Jeremiah Gurzi (making his feature film debut) introduces us to each man’s life. The camera is often stationary for extended periods of time, inviting us to drink in the entirety of Mickey and Jasper’s environments. (The cinematography by David Myrick is exceptional. Unfortunately, it is also showy to the point that I was rarely not aware of it.) Some of these separate scenes have a bit of an amateurish tone to them, but the movie comes together quite nicely once the two leads team up for their adventure.

Denny and Tepper have a natural, believable chemistry that makes their on-screen partnership enjoyable to watch, even if there’s not much going on. Denny — looking and dressing like a washed-up rock star from the 1970s — is particularly impressive, radiating a devastating mixture of danger, charisma and helplessness. Not bad for a guy who, according to IMDb, has mostly made his living on movie sets as a grip and electrician. Tepper is appropriately sturdy and exasperated as the more responsible friend (he even comes with a pregnant girlfriend, for cripes sake!), but Jasper is far from perfect. Early on, we learn Jasper — a staff writer for the Los Angeles Chronicle — is vaguely past deadline on an unspecified article he needs to write, so going on a meteorite hunt is as good an excuse as any to procrastinate.

Gurzi is able to generate a low-key, effective tension during the climactic sequence when the bad guys come to the duo’s motel looking for the money Mickey took. (The film’s final shot is also a heartbreaker.) On the other hand, I didn’t really care for a final-act turn of events that felt a little too convenient. More importantly, I really wish the audience hadn’t known about Mickey’s counterfeiting — or his plan to grab the money — from the very beginning. We might’ve strongly suspected he was lying about hunting for meteorites, but a small part of us could’ve held out hope he was actually telling Jasper the truth.

It’s a familiar feeling for those of us with That Friend, and it’s a feeling captured rather nicely in Heaven Strewn.

Heaven Strewn is presented in an aspect ratio of 2.35:1. The 1080p image is arrived at with an AVC MPEG-4 codec at an average of 33 mbps. The Blu-ray case boasts that Heaven Strewn is “a 16mm anamorphic motion picture.” (Makes sense: 16mm film is primarily used by budget-conscious independent directors and frequently utilized by documentary filmmakers in extreme climates.) This movie qualifies on both counts. The constant grain is immediately noticeable and complements a lot of the dingy settings quite well. As a result, the sharpness isn’t great, but that’s not really the point.

The brightness is often intentionally amped up (especially during outdoor scenes when Mickey and Jasper are “meteorite hunting”), leading to an overexposed image and knocking the color and contrast a bit out of whack. The flesh tones, however, remain nice and natural. The black levels are also solid. Most of all, I commend the filmmakers for waiting until around the 45-minute mark to give us our first gratuitous lens flare. Considering so much time was spent outside in the sun, that’s some remarkable restraint.

The Dolby Digital 2.0 track does a really good job on sound effects. In fact, it does almost too good of a job to the point that some noises (like Jasper peeing) are abnormally loud. Background sounds are surprisingly subtle, adding a nice texture to any scene where Mickey and Jasper are driving or meteorite hunting.  The dialogue comes through loud and clear.

Filmmaker and Cast Commentary: Gurzi and leading man Denny aren’t the chattiest duo at first, but eventually get a nice conversation going. Gurzi does the majority of the talking. The director speaks about utilizing practical locations (his home office, a friend’s bathroom, Tepper’s real-life Ford Explorer) instead of sets, as well as  some of the other challenges of making a micro-budget indie. Denny does pipe in to talk about the great affection he developed for Tepper. (Similar to the affection Mickey has for Jasper.)

Deleted Scene: (7:26) There’s no intro or commentary for this scene (presented from multiple angles), but it’s easy to figure out that the two boys are young Mickey and Jasper, with Mickey getting the pair in trouble for shoplifting in a convenience store. Props to the actor who played the clerk for repeatedly having a candy bar thrown at him. The rare deleted scene that I would’ve liked to have seen in the final cut. (Particularly very early on in the movie.)

Production Gallery: (17:44) This is a behind-the-scenes slideshow of the cast and crew on the set, featuring candid shots instead of promotional stills.

The “tiny indie” seams are definitely visible on Heaven Strewn, but the movie wears them pretty well. Though I had a few issues with the story’s structure and that final act development, the film successfully explores a familiar and special kind of friendship thanks to a tight script and two solid lead performances. Heaven Strewn is far from perfect, but it’s quite a promising start for a director making his feature debut. I’ll be keeping an eye out for any future efforts from Gurzi and/or Denny.

The Weight of the Nation Leverage: The Fourth Season