Posted in: No Huddle by Brent Lorentson on August 2nd, 2012 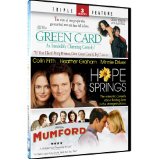 The romantic comedy, the genre most guys avoid like the plague unless trying to score some points with the girlfriend.  It’s the genre I seem to only like a handful of titles from, though the ones I do like seem to be my fallback films after a breakup.  Beautiful Girls and High Fidelity seem to be the go-to films for me. With a triple feature of Rom-Com action heading my way I dug deep into my manly soul and told myself I can do this.  If I can survive watching bad Tyler Perry knockoff films, then this lighthearted triple feature should be no trouble at all.  Like a film-watching champ I sat back with my bag of Twizzlers, a big soda, and my note pad ready, I rolled the first film, Mumford.

With Lawrence Kasdan at the helm as writer and director I was a bit optimistic with this film; after all he was a writer for Raiders of the Lost Ark, Empire Strikes Back and even wrote and directed Body Heat.   Though he does boast a strong writing and directing resume, it seems Mumford was a bit of a miss for me.

In the small town of Mumford a local psychiatrist, Dr. Mumford (Loren Dean) has his own off-the-cuff way of treating patients that seems to have helped make a name for himself in the community.  His trick to being such a good shrink is nothing more than listening to his patients and giving them common-sense advice.

This is an ensemble piece with great cast of old and new talent throughout.  Jason Lee pre-My Name is Earl plays a young billionaire who is lonely and seeks out Dr. Mumford to be a friend for pay.  A young Zooey Deschanel (500 Days of Summer) shows up on his couch filled with body image issues while Mary McDonnell (Battlestar Galactica) sees the good doctor about her troubled marriage, though her problems are revealed to be much deeper.  But the patient who seems to have their greatest impact is Sofie (Hope Davis).  Sofie is suffering from severe depression and chronic exhaustion, and as the good doctor continues to treat her, he begins to realize he’s also falling in love with his patient.

With the film handling the idea of how we share our innermost secrets to someone we really don’t know, the reveal that Dr. Mumford has the biggest secret in the town just seemed a bit too farfetched.  It’s not so much the idea that I found farfetched, but the reaction of the people in the town.  Overall this is a sweet movie but rather forgettable.  Though what did make this movie fun was seeing all the young up-and-coming talent that seems to litter the background here.

In Hope Springs we follow Colin Ware (Colin Firth) as he is leaving England after finding out his fiancé (played by Minnie Driver) is already engaged to another man.  To try to recover from his heartache Colin checks into a hotel in the small town of Hope, Vermont where he plans to work on his art and make a new life for himself.  It’s in Hope that he meets Mandy (Heather Graham) who is the town’s free spirit who seems to be the woman to call whenever there is any relationship or emotional trouble.

When Colin meets Mandy, it’s no surprise that he falls in love with her; after all, she’s Heather Graham, and in the role she’s simply too good to be true; why would he ever go back to the cold, cynical Vera?  If there was any fault here it’s by making Mandy so likeable there is never a single moment where you think that possibly he’d ever go back to his ex.  But why would he go back to his ex anyway when she’s already engaged to some other guy? Well, apparently this was just a big lie to try to convince Colin to finally settle on a time and actually marry Vera.  Yeah, like any guy would actually be okay with this.  Seeing Firth, Graham and Driver together is fun, and it’s a shame they didn’t have a stronger script to work with to create some form of real drama.  It’s a sweet movie, but this one just left me with a bad taste in my mouth.

Somehow this film has eluded me over the years.  Peter Weir is one of those directors you seem to forget how great he is till you finish one of his movies.  With Green Card as his in-between film of Dead Poets Society and Fearless, I’m not ashamed to admit I was really looking forward to seeing this.

The film wastes no time jumping into the story of Georges (Gerard Depardieu) and Bronte (Andie MacDowell) who have never met before but get married for equally beneficial reasons.  Georges is a struggling French composer seeking to attain a green card and Bronte has her eye on an apartment with a beautiful garden, though the apartment is for married couples only.  So with their marriage license in hand the two go their separate ways.  Everything is fine till people with immigration come to check up on the couple, and they suspect that these two may not really be in love.

With only days to get to know one another Georges and Bronte decide to have a cram session before the next interview to get to know all there is to know about one another so they can go on and live their lives as well as avoid jail and deportation. This is a scenario where we see great writing, directing and acting all coming together and making something special.  Where this movie won me over came with its unconventional ending where it really just leaves you hanging simply had me hooked.  I love this movie.

Overall this isn’t a bad set and worth the buy alone for Green Card; the other titles are just some extra fluff.  These DVDs are bare-bones and come with no special features, but it is not a bad DVD set to pick up for the girlfriend or wife to make her happy.

Brent Lorentson is a horror writer and film critic based out of Tampa, Florida. With a BA in Digital Film, he co-wrote and co-directed Scavenger Hunt. His short stories have appeared in various horror anthologies. In 2019 his short script Fertile Blood will be a part of the anthology horror film Slumber Party. He is currently working on his first novel A Dark and Secret Place set to be released in late 2019. Favorite Films: Taxi Driver, Fight Club, I Saw the Devil, The Wild Bunch, Dawn of the Dead, A Clockwork Orange, Pulp Fiction, Heathers, The Monster Squad, and High Fidelity.
Gunsmoke – The Sixth Season Volume 1 Mystery Science Theater 3000: XXIV