Posted in: Disc Reviews by William O'Donnell on August 2nd, 2012 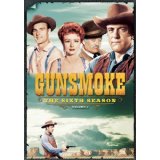 I’ll say this about a program that has remained  consistant in quality for twenty seasons…it makes for challenging reviews. Talking about each season of Gunsmoke is difficult in that you either write briefly to try to avoid redundancies, but might seem too hasty, or you have to labour over each episode, in which case, you’re only going to have hardcore fans paying attention. Since this website has touched on previous seasons: ( http://upcomingdiscs.com/?s=gunsmoke ) I shall opt for the former option, and hope y’all out there catch that I’m not being hasty…but respect a show that warrants no fresh complaints after 6 years a-runnin’ thus far.

James Arness’ Marshall Matt Dillon is still the imposing, yet warm, lawman of Dodge. The tales in season 6 are frequntly violent, more violent than I recall in reviewing the previous seasons. This might not be saying a whole lot about a show whose opening credits are entirely comprised of a scene where the star of the show kills1 a man, but there just seemed to be that much more gun play in this season.

TV history buffs would note that this is the last season where Gunsmoke sat at the #1 spot in the Nielsen ratings, as well as the final season before episodes expanded from half and hour to a full hour run-time.

B&W Fullcreen. A pretty nice transfer, although it somewhat seems like not exactly as much care has gone into this one than previous efforts. I may be wrong, but I had admired the previous releases for their crispness while this one is the first to show a bit more of it’s age.

None. Another first for this series of DVD releases.

At this rate, 6 seasons in, fans will be so immersed in this series that added features and little bonuses may no longer be needed incentives. This is relatively bare bones, since it’s just half a season with nothing else added, but will still look good resting between seasons 5 and 7 on your collector’s shelf, and makes for great viewing.