Posted in: Disc Reviews by Gino Sassani on August 2nd, 2012 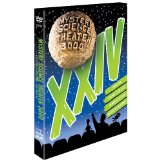 “You have been summoned to a place beyond this Earth, a place beyond your understanding. A place with laughter and love, safety and happiness for all eternity. A trusted friend will accompany you to this other plain of existence. And your journey will begin. Watch for the signs, my friend. Godspeed and good luck.”

The place you are being summoned to is that wacky film study group that is MST3K. Classes are about to begin again thanks to Shout Factory and their continuing release of these classic films and the men who hate them.

Mystery Science Theatre is an acquired taste. For me, I’ve really got to be in that certain mood to watch it. That’s the beauty of these DVDs. You pop them in when you’re ready. The idea is pretty whacked. Depending on the season you’ve got, Joel or Mike is trapped in space on the “Satellite of Love”. Doomed to spend his life watching very bad films, our hero makes the best of a bad situation. He uses his resources to construct a couple of robot pals. There’s Crow T. Robot (Beaulieu), Tom Servo (Murphy), and Gypsy (Mallon). Part of an experiment together, they watch the films from the front row, constantly ranting throughout. If you’re like me, you’ve invited a few friends over to watch a schlock festival. The movies weren’t as important as the banter you created while watching. That’s exactly what you see here. The silhouettes of our host and his robots dominate the lower portion of the screen, where they provide alternative dialog and sometimes witty commentary on the action. The two evil station owners/mad scientists send them a new bad film each week to observe their reactions to the bombs. The films are broken up by off-the-wall skits and fake commercials to alleviate the tedium. The collection includes two Mike and two Joel episodes.

Each of these movies are put together from a very different foreign language project. All are dubbed…badly.

You get four discs, each with a different film:

This film was one of the first to combine the popular sport of Lucha Libre, masked Mexican wrestling with horror films. It would become quite a prolific genre in the years to come. Many of these films featured popular Mexican wrestler Santo, the Silver Masked Hero. This was one of those films. Santo is renamed Samson for American audiences and is somewhat of a superhero in these films. He ends up wrestling with Satan himself in his attempt to rid the town of a cult of vampire women.

The aforementioned vampire women are looking for a new Queen to lead them. They target Diane Orloff (Duval) the daughter of professor Orloff (Benedico). Popular Mexican starlet Lorena Velazquez plays the retiring Queen. It’s all pretty ugly and hard to follow. Which makes it perfect for the MST3K treatment.

Skits here the final farewell to TV’s Frank who is taken to Second Banana Heaven. It was Frank Conniff’s final episode.

You won’t find much dragon in this film until the very end. By then you would have thought the title should have said “draggin'”. Ilya (Andreyev) is a peasant who comes to be a friend of the King. Soon he is discredited by a traitor but eventually saves the kingdom from a barbarian horde.

This might be one of the hardest films to follow yet. It was completely re-written through dubbing to be an American children’s fable, but a lot got lost in the translation.

Skits include a game of Dungeons & Dragons with Tom Servo acting as dungeonmaster. Frank and the Doc end up with new upstairs neighbors, but they don’t know how to handle being with a couple of girls.

These two films provide the only true 2-part episode in the show’s run. They are actually composed of episodes of a Japanese television show strung together. The films were an obvious attempt to cash in on the Star Wars theme. Because of the way they were cut there is little of a plot here. Mostly, the films deal with an alien who joins Star Force when he refuses to kill a child for their enemy.

Skits include Joel doing a pretty good imitation of the heavy-drinking captain. There’s a running joke about getting killed by a forklift, taken from the first film. This is also a big musical episode with a lot of joke songs from the guys. There are also quite a few good Star Trek zingers in the riff sessions.

Each episode of MST3000 is presented in its original full frame format. It doesn’t really matter what the original film intent might have been. These prints are far better than they deserve to be. Mostly the low-budget prints are surprisingly clean. Now, that’s not to say they look good at all. Colors are always washed out. It’s just that these films really don’t warrant anything better than poor. Of course, colors and black levels are highly variable from episode to episode. The MST3000 stuff is pretty much nicely reproduced. We’re talking cardboard sets here, so they look pretty bad, but at least they look bad in nice color and definition. If you’re a fan of this show, you’re not here for the video specs.

The Dolby Digital 2.0 track is often terrible. Dialog on the films is often muted or unintelligible for a variety of other reasons. Musical scores are more often than not distorted. Dynamics is a word with no association at all to these productions. Still… that’s not what you’ll be buying them for. Fortunately, every word of wit and wonder from our hosts is clearly audible. Don’t take this the wrong way, but bad is good here.

Lucha Gringo: (11:20) A look at the Mexican wrestling scene and its blend with horror films.

Life After MST3K – Frank Conniff: (11:32) Frank talks about what he’s been up to since he left the show.

Two Film Shorts Ripe With Riffing: Snow Thrills and A Date With Your Family. Both are 10-minute 1940’s/50’s bad documentaries.

You Asked For It – Sandy Frank Speaks: (25:29) Frank gives us every second of his career here. He only mentions MST3K in passing and appears to dismiss them completely.

It’s another in the steady release of these episodes from Shout Factory. I’m impressed that they continue to deliver some sweet, if short extras. It makes the sets that much more of a value. As for the films themselves…well… “They don’t have to all be so bad.”

Gino Sassani is a member of the Southeastern Film Critic's Association (SEFCA). He is a film and television critic based in Tampa, Florida. He's also the Senior Editor here at Upcomingdiscs. Gino started reviewing films in the early 1990's as a segment of his local television show Focus. He's an award-winning recording artist for Omega Records. Gino is currently working on his 8th album Merchants & Mercenaries. Gino took over Upcomingdiscs Dec 1, 2008. He works out of a home theater he calls The Reel World. Favorite films: The Godfather, The Godfather Part II, The Body Snatcher (Val Lewton film with Karloff and Lugosi, not the pod people film), Unforgiven, Gladiator, The Lion King, Jaws, Son Of Frankenstein, The Good, The Bad And The Ugly, and Monsters, Inc.
Hope Springs & Green Card + Mumford – Triple Feature Shark Divers – Documentary Collection (Blu-ray)