Posted in: Disc Reviews by Gino Sassani on August 9th, 2012 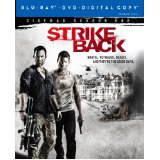 Cinemax has finally joined the world of original cable television programming. It’s not really a first step since the powers that be at Cinemax are part of the HBO family of premium cable channels, and HBO’s been in this game for a long time. They pretty much started the whole thing over 20 years ago. HBO is also distributing this home video version of Cinemax’s first series, and it’s an explosive series, to be sure.

Strike Back follows the exploits of an elite and secret British military team called Section 20. On paper they do not exist, but they’ve got all the best new high-tech toys, and they’re going to need every one of them. They’re going after the top terrorist threats. They combine the intelligence gathering network of a CIA-type organization with the precision strike force impact of a top Navy Seals team.

Cinemax tells us a little about this season’s main characters:

Damien Scott is a former Delta Force commando whose confidence with a weapon is matched only by his way with women. His cocky style is often at odds with his more staid colleagues, but he always gets the job done.

A clear-thinking and reliable soldier, Sgt. Stonebridge brings strategic clout to Section 20. He and his wife Kerry are the picture of a perfect couple, but there’s more going on in his family life than meets the eye.

Colonel Eleanor Grant is the no-nonsense commander of Section 20, an elite military black ops unit within the British government that focuses on high-risk, top-priority targets. She’s clear, authoritative, and smart as hell.

Captain Oliver Sinclair is Section 20’s chief intelligence officer, responsible for the logistics and management of the entire team and the high-tech mobile unit known as the crib. In all day-to-day operations, he is Colonel Grant’s right-hand man.

Sergeant Julia Richmond is Section 20’s chief communications officer, responsible for maintaining contact with agents in the field and all other relevant transmissions. She is exceptionally bright, technologically adept, and proficient in several languages.

As the season begins Damien Scott is using his Delta Force skills in underground fights where he has trouble taking the required “dives” for the corrupt organizers. He was dishonorably discharged and framed when he was run out, so he’s displaying some understandable bitterness in life. It all changes when his former partner and now Section 20 operative is taken by terrorists. He’s killed on one of the common taped executions. But he’s delivered a secret message in a code that only Damien can understand. Suddenly he’s back in demand and working for Section 20.

His new partner is Stonebridge, but he doesn’t trust the recruit. But as they fight their way from one hot situation to another the two develop a “brothers in arms” bond and work quite well together. They’re on the trail of a super-terrorist named Latif, and the mission takes them around the world from one tight spot to another.

Trust is a huge issue on this show. Even though Damien and Michael develop a bond, the rest of Section 20 doesn’t trust Michael, and he doesn’t trust them, believing that they caused the death of his partner. The season leads to a rather chilling finale where secrets are revealed that’s going to make trust an even rarer commodity. No one is safe in this series, and you’re going to lose a regular or two before it’s all done.

The series is quite compelling. On the surface it appears to be one of many recent shows that deal with tracking down terrorists. Since 9-11 there’s little doubt that the radical extremists have become Hollywood’s favorite bad guys. The field has become so crowded between feature films and television shows that it’s going to be very difficult for any one show to set itself apart from the pack. I have to say that Strike Back does just that. The show strikes just the right balance between action and drama. The characters become rounded out in a hurry, and we become attached to them rather quickly. The action doesn’t take us so over the top that our characters appear to be practically indestructible. They don’t always win the battle, and the scars are part of the process. These guys don’t have any super powers, they’re just very good at what they do.

There’s some real talent in the cinematography and editing. You get the sense that you’re boots on the ground during the action. The camera takes you to eye level, and the production values are high enough to sell it all. Need a breath? You get one when the characters do, and the show can actually feel a bit fatiguing at times. It’s obvious how much more an organization like Cinemax can bring to this kind of series that network productions just can’t match. You couldn’t do this on NBC or the others, and it would be best they not even try. The closest I’ve seen to this kind of show was The Unit, another very good show that did appear on network television. But even The Unit couldn’t touch this kind of action. Fans of that show will particularly love this one. It’s what that show would’ve been with this kind of a budget.

Finally, while we have the usual terrorist bad guys, these are not cookie-cutter characters. Latif, played by Jimi Mistry, is played as a cunning adversary who is not merely twirling a moustache or screaming anti-American religious chants. The best bad guys don’t act very much like bad guys. The crew at Strike Back gets it. There’s a lot going on in about ten hours of show here. You really should set aside time blocks and not try to watch this an episode of a time. Before you know it, they’re gone. Fortunately Cinemax is making more.

The show is a remake, of sorts, of a British series. It’s actually more of a sequel. This show begins with the death of John Porter, played by Richard Armitage in both shows, who was the main character in the British version. With a very real connection fans of the original show can feel that this is more of a continuation of that story rather than the usual Hollywood Americanized version that usually happens with these imported properties. It’s actually a very clever idea and should serve as a model for future cross-over ideas. There’s no question that this version is more high-octane and features more of the battles and explosions, while the original was a bit more of a thinking man’s show. But I promise you that you’ll get plenty of both here. British crews are very much a part of this show so it’s not really a total American take-over. Season two is about to be underway on Cinemax, so this set will be just the ticket to prepare you for the ongoing series on television. Spend ten hours with this Blu-ray set “and we are ready for action”.

Gino Sassani is a member of the Southeastern Film Critic's Association (SEFCA). He is a film and television critic based in Tampa, Florida. He's also the Senior Editor here at Upcomingdiscs. Gino started reviewing films in the early 1990's as a segment of his local television show Focus. He's an award-winning recording artist for Omega Records. Gino is currently working on his 8th album Merchants & Mercenaries. Gino took over Upcomingdiscs Dec 1, 2008. He works out of a home theater he calls The Reel World. Favorite films: The Godfather, The Godfather Part II, The Body Snatcher (Val Lewton film with Karloff and Lugosi, not the pod people film), Unforgiven, Gladiator, The Lion King, Jaws, Son Of Frankenstein, The Good, The Bad And The Ugly, and Monsters, Inc.
Blue Like Jazz (Blu-ray) Contest: Win Girls Gone Dead From Entertainment One