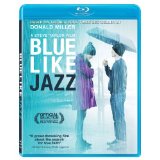 Small-scale Christian (or faith-based) films have found modest-yet-passionate audiences in recent years. They also have a reputation among mainstream moviegoers for being overly earnest. Blue Like Jazz — based on the popular 2003 crisis-of-faith best seller by Donald Miller — curiously circumvents that criticism by employing an overly stylish approach and, more importantly, by not billing itself as a “Christian movie.”

Don (Marshall Allman, True Blood) is a 19-year-old Baptist in the heart of the Bible Belt in Texas. After his family life is rocked, Don decides to flee town and attend Portland’s Reed College, the most liberally liberal liberal arts campus that ever protested a major corporation. (In this case, a chain bookstore and a company that sells bottled water.) Don’s predicament is initially played for fish-out-water laughs, but he eventually assimilates with his godless surroundings until he’s forced to face his former life in the film’s climax and resolution.

I mention the “climax” and “resolution” because one of several extraneous gimmicks involves Don (in voiceover) using the elements of storytelling — setting, conflict, climax, resolution — to guide us through the movie. (I suppose it loosely ties together to an English or literature class we only see for a couple of scenes.) I give director Steve Taylor — better known for his Christian music career (and, it should be noted, the movie’s soundtrack is terrific) — some credit for the effort he put into livening up his faith-based film. Taylor and Miller insist all of the seemingly over-the-top Reed College shenanigans are based in reality, and I’m inclined to believe them. The problem is that, in addition to a parade of goofy/cartoonish characters, we also get bits like the animated sequence where Don turns into a rabbit and follows a carrot to Reed College. These moments are baffling at best, and distractingly low-rent at worst. It’s a shame because Blue Like Jazz achieves moments of real dramatic heft, including an awkward Christmas visit from one of Don’s Texas friends and, most notably, a confessional scene toward the end.

Allman’s eager energy and expressive face serve his character well because they help sell Don’s impulsiveness and anger. (Though I wish his crisis of faith had been more fully developed before the confessional scene.) Claire Holt is lovely as Penny, the do-gooder who helps steer Don back toward his faith. However, I thought Allman had more spark with Tania Raymonde’s Lauryn, the brash lesbian he meets during his first day of class. Justin Welborn adds some nice shades to his outrageous campus Pope character, and I wish Eric Lange had been in more than one scene as Don’s charismatic, deadbeat, jazz-loving father.

While the movie’s PG-13 rating and colorful depictions of college debauchery disqualify it from being considered a traditional faith-based film, Blue Like Jazz touches on some interesting issues Christians face (particularly in their 20’s or 30’s.) In Reed College, for example, it’s the lesbian who implores Don to stay “in the closet” with his Christianity. I was also intrigued by the notion that some Christians fall down the slippery slope of being ashamed of their religion’s goofier aspects (like a Mexican puppet show) and wind up being ashamed of being Christians. I just wish Don hadn’t needed a girl/love interest to push him back to his faith because it felt so…typical.

More importantly, these ideas wind up being almost beside the point because Taylor, Miller and Co. seem more interested in making the quirky, faith-based film version of Animal House.

Blue Like Jazz is presented in its original aspect ratio of 1.78:1. The 1080p image is arrived at with an AVC MPEG-4 codec at an average of 19 mbps. Set in the Pacific Northwest (but filmed mostly in Nashville), it seems like the contrast was cranked up on purpose to make the sky look whiter/cloudier than it did. Unfortunately, this often spilled into the rest of the picture, which occasionally became soft. I found this film to be a rare instance where interior and nighttime scenes consistently looked better than outdoor scenes during the day (probably because they didn’t have to deal with the contrast issue.) Close-ups generally looked great, however, and there are some decent pops of color (mostly in those indoor/nighttime scenes.) The animated bits, on the other hand, came off looking unfinished.

The DTS-HD Master Audio 5.1 track for this film won’t win any points for subtlety. The track’s 5.1 channel capabilities are mostly squandered because almost all of the action (except for a few party scenes) gets pushed to the front speakers. Though I still wish the sound presentation had been more dynamic, I do give the track props for doing the two things it focused on (music and dialogue) very well. The music is a bit overpowering at times, but as I said earlier, the songs and score are both pretty great. Plus, they never impair your ability to hear the dialogue.

Audio commentary with author Donald Miller, cinematographer Ben Pearson and director Steve Taylor: Right at the outset, the trio (who also co-wrote the film) tries to decide if they’re going to do a regular commentary where they talk about how fabulous everyone was or if they’re going to make fun of people. Ultimately, they decide to do both (with a greater emphasis on goofiness). The guys only occasionally stop busting each other’s chops to defend the movie against charges it makes fun of the Evangelical church or talk about the real experiences that inspired the film.

Making Blue Like Jazz: (11:40) Covers the first day of shooting (with Miller taking us on a mini-tour of the set) as well as the film’s premieres in Portland, Reed College and Nashville. The most interesting part for me was Taylor talking about intentionally making both the Baptist church and the liberal arts college extreme because “movie stories” that deal with the human experience don’t live well in the middle. (I beg to differ: there may be less room for nuance, but Taylor makes it sound like there’s NO room.) Still, this was more interesting and more stylish than the average behind-the-scenes doc.

Master Class: Directing Actors on Set: (3:46) Features “Taylor” (in a dubbed-in voiceover) giving unhelpful notes like, “I need 36% more enthusiasm”, asking Lost actors Lange and Raymonde about that show’s ending, and pushing his Hunger Games fan-fiction on anyone within range. Thoroughly silly and fun.

Deleted Shots: (1:56) “Shots” like “Religious painting in room” are accompanied by notes such as “Reason for Deletion: Symbolism Too Obvious.” This is completely random, but I love that someone took the time to include this parody of Blu-ray/DVD deleted scenes.

Photo Gallery: This batch of on-the-set pics is precisely the sort of thing you’d expect. After the Master Class and the Deleted Shots, I was anticipating a twist. Oh well, they can’t all be winners.

Save Blue Like Jazz: (2:48) Co-producers Zach Prichard and Jonathan Frazier launched a campaign on Kickstarter — a website where anyone can donate any amount of money to fund creative projects — to help save the movie when the project ran into financial trouble in 2010. Their goal was to raise $125,000, and they nailed it in 10 days. In the end, they got 4,495 people to donate $345,992 over the course of 30 days. Each of those people is credited as an associate producer during the credits. Pretty outstanding. As a result, Blue Like Jazz remains the largest crowd-sourced film in American history.

The Cast: (4:18) The main actors (Allman, Holt, Raymonde and Welborn) briefly and enthusiastically talk about their characters. Mostly, I was a bit blown away to learn that Holt is Australian — great job hiding the accent.

The Animator: (1:19) We get five facts about animator Jonathan Richter, courtesy of Steve Taylor, while Richter (I’m assuming it’s him) silently works in the background. Too cutesy by half. (We never learn the identity of the boy who reads the five facts out loud. Richter’s son? Taylor’s son? One of the associate producers?!)

This Is My Story: (3:15) A small group of people who worked on the film talk about how they each relate to the story in Blue Like Jazz. Unfortunately, they do it in this overly artsy, black and white featurette that comes off like a parody of an anti-drug commercial from the 1990s.

The Music: (6:24) Composer Danny Seim (of the band Menomena) — along with his dog Geddy Lee — gives us a tour of his modest work space. (Highlighted by his six-year-old, $300 computer that still works well enough.) This is actually hilarious stuff, even if Seim is working a bit hard on the stoner vibe. Either way, Geddy Lee steals the show.

I was generally impressed by the cast and the amount of style the filmmakers were able to bring into this small-scale production. Unfortunately, all of that style — along with the insistence of not being pegged as a typical “Christian film” — winds up marginalizing a worthwhile message of self-discovery. Even though that message is muddled to the point that it needs to be spelled out in the end, I’d recommend you give this one a look. (But I’d suggest you Redbox/Netflix it instead of buying it.)