Posted in: Disc Reviews by Michael Durr on August 13th, 2012 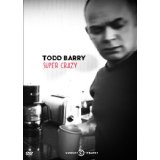 Stand-up comedy almost always puts me in a good mood. Even when it is bad, it can be unintentionally good and what is good can often be spectacular. Needless to say, I always am on the lookout for new comics or comics that I have overlooked. Today, we get to take a look at Todd Barry, a man who has been in standup for about 15-20 years. Yes, I believe I have completely missed this one.

Todd Barry was born on March 26, 1964 in the Bronx, New York and grew up in Florida. He actually did not start doing standup until about 1994 where he did a few open mike nights in New York City. It was not until 1999 where he finally got a break of sorts as he did a Comedy Central Presents episode that showcased his brand of comedy. I believe this is the standup that I saw a few weeks ago though I might be confusing it with the episode he did for Comedy Central during 2006. It was really good regardless.

After doing standup for a while, he started to appear on a variety of shows doing voice work. These shows included Dr. Katz, Aqua Teen Hunger Force and other edgy type cartoons from Adult Swim. Films also did not elude Todd for he did everything from Pootie Tang to The Wrestler to directing and writing his own short film, Borrowing Saffron. With three successful comedy albums to his credit (Medium Energy, Falling Off the Bone, and From Heaven), he rolls into his latest work, Super Crazy.

In this very good offering, Todd goes through a variety of subjects. His first salvo involves two ingredient drinks that apparently need special qualifications much to his disbelief. Todd tells us he has been doing comedy for roughly twenty four years and talks about wealth (or lack there of) of performing. He’s also only signed unfortunately two pairs of breasts during that time. (That’s two more than me). From there, he goes right into how New York tourists act when somebody tries to help them.

The comedy hits a real high point when he talks about a personal issue of his, germ phobia. But he comes off as a lazy germaphobe, since he’s willing to wash his hands 500 times but not doing anything that’s actually complicated. From there he mentions a few other topics including Twitter and that his deodorant had way more Internet reviews than expected. Todd blends all of this with an occasional crowd interaction and shows he can think on his feet.

Todd much like myself is very dry in his delivery. His sarcastic banter and style can take a little while to get used to for people who are used to the prototypical comic (tell a joke or situation, wait for laugh and repeat). However, when you find yourself in that comfort zone, usually after 15-20 minutes Todd really has a gift for hitting the right moments and knowing when to push a joke just that much farther. Not every joke is out of the park, but more often than not, he hits a ton of doubles and triples.

I also found considerable delight with the topics as they touched on situations and occurrences that are very near to my heart or very relevant to current trends. Admittedly, there is some let down for the last twenty minutes, but honestly it’s very minor. Overall, this is a great performance. This becomes a good way for people to get introduced to this very overlooked comic and get a full hour of entertaining standup.

The video is in 1.78:1 anamorphic widescreen presentation. Comedy Central consistently gives us the goods in video quality. Todd looks about as good as a balding man in his forties can look. The environment is right on key and there are really no problems to report. Pans to the audience work out just peachy and it’s about what you would expect from a comedy concert.

For the audio portion, we get a 2.0 Dolby Digital track in English. Again, this is right on queue. Barry’s voice tends to trail some but the audio quality is on cue and we never miss a word. There is not much environmental noise outside of clapping and laughing. Nice clear dialog and again what we should be expecting from a comedy concert. English SDH subtitles are included.

Along with this special, Todd Barry was most recently seen in Wanderlust and will be seen in the upcoming Vamps, a 2012 horror comedy that will include Alicia Silverstone and Sigourney Weaver. But when he’s not doing a comedy part in a movie, Todd has some great stand-up and this is showcased in Super Crazy. The variety of topics is well varied and should keep people who can appreciate his style laughing for most of the hour performance.

The disc is of basic quality for Comedy Central and features decent video and audio. The extras are unfortunately very throw away and I would have thought that it would have been a lot better if they included some earlier performances from Comedy Central Presents. (I believe these performances might be on his Falling off the Bone CD/DVD but don’t have it to be sure). Anyway, this disc comes much recommended and for anybody who is willing to appreciate some wonderfully dry humor.

Michael Durr has been reviewing movies for the better part of fifteen years now. He primarily enjoys thrillers, sci-fi, animation and even a little courtroom drama. His favorite films include Escape from New York, the Goonies and anything with Alyssa Milano. When he’s not praising Kurt Russell as the greatest actor of our time or scratching his head over a David Lynch flick, he’s spending time at home in Texas with his lovely wife, Lori and his amazing son. How they put up with him is a mystery, but even Basil Rathbone doesn’t have the time to solve that one.
Contest: Win NCIS: The Complete Ninth Season From CBS/Paramount The Rookies: Season Two