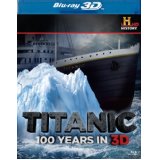 I never really meant to have 3D TV in my home theater. But our Sony Blu-ray player was 3D-ready, and the receiver and monitor both needed warranty replacement about the same time. Bingo: All I needed were a couple pairs of glasses ($40 each at Amazon) and some 3D programming. Having seen almost every 3D big-screen release already, I was pretty sure the TV version would be an inferior format. I was wrong. The electronic-shutter glasses beat the heck out of those old red-and-green gimmicky glasses. They work as well as the polarized lenses at the multiplex.

To me, 3D television is sort of like a talking dog: It doesn’t matter what the pooch says, the miracle is that he can speak at all. My Internet hookup provides two 3D channels but they are mainly short demo reels and trailers for films and video games. So now my DVD and Blu-ray collections are joined by a much smaller shelf of 3D Blu-rays. It includes a very view features (A Very Harold and Kumar 3D Christmas is an absolute hoot) and several documentaries, mainly travelogues from the IMAX catalog.

The Grand Canyon and CGI dinosaurs make for fascinating 3D viewing, but nothing hypnotizes a history buff like the massive marine tragedy that took 1,500 lives a century ago. Titanic: 100 Years in 3D, retells the still-compelling story with one eye-opening new angle. Three-dimensional cameras with wide lenses and sharp lighting dove under, around, and eerily close to the hulk that went down in the North Atlantic on April 15, 1912.

Using scale models, voice-over readings of survivors’ memoirs, and actual footage of the wreck and its surroundings, this History Channel documentary reminds us of the magnitude of a disaster no one thought was possible.

We all know that an iceberg ripped the starboard side below the water line and that the massive craft sank a mere two and a half hours later. But this version adds details we didn’t get in some previous versions, particularly the heavily fictionalized James Cameron mega-hit, Titanic. (By the way, we saw Cameron’s own 3D documentary on the wreckage, Ghosts of the Abyss, in theaters several years ago. It was a spellbinding visit to the depths, and is due out on 3D Blu-ray this fall.) That sort of relegates this version to minor status despite being first on the home video market.

No matter. Titanic buffs will want to experience them both. So will folks who like to demonstrate the 3D miracle on their own home systems.

Did the executive officer shoot two passengers and himself? The filmmakers present a little evidence and a lot of speculation. Historians add stacks of anecdotal material, giving us a fuller picture of real events as well as some idea of much we still don’t know about that fateful series of horrible events. Tiny details and recovered possessions add up to a sense of massive panic and total catastrophe.

A century later, the Titanic still haunts us, and this brief, high-tech summary reminds us why.

Dolby Digital 5.1 does the job, especially when we get narration that overlaps some of the re-enacted scenes. Words are clearly enunciated, and the voice actors are convincing when reading from diaries, journals, and published interviews of the era.

Considering the depth and darkness of where the Titanic came to rest, the visuals of the wreck are spectacularly sharp and revealing. The 1.78:1 1080p presentation provides sharp details above and below the surface. You won’t see much on the very inside of the ship – it’s considered intrusive and ghoulish. But there are plenty of peeks into massive openings, plenty of looks at the doomed boat’s fittings and the many objects that landed away from the wreck itself. Those are the collectible relics that historians will be studying for decades.

Nope. Everything is in the 45-minute main program, although subtitles are available in Dutch, German, Polish, Danish, Swedish, Norwegian, Spanish and English.

While not as dramatic or cinematic as Cameron’s 3D doc, Titanic: 100 Years in 3D plays out the way you’d expect the History Channel to do it, which is with an eye for objectivity and an ear for memorable moments.