Posted in: Disc Reviews by Gino Sassani on August 31st, 2012 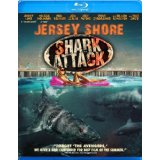 Anyone who has watched enough of the SyFy original movies has a pretty good idea of what they’re getting. The network has made a bit of a name for itself with low-budget to no-budget monster movies. Most of the creatures are mutant and large and appear like they escaped from a bad 1950’s drive-in theater. The computer generated stuff usually looks like a kid drew it up on their pocket computer, and the cast is going to be made up of unknowns with a few known names to give the whole thing some street cred. The movies are usually good for a few laughs; some of them might even be intentional. It’s all usually harmless fun. But, after watching Jersey Shore Shark Attack I believe that Steven Spielberg must be rolling over in his grave. He’s still alive, you say? Wait until he catches this movie on his Tivo. In fact, if he’s got it on his Netflix queue, I’m taking Steve in the next dead pool that comes out. Unfairly harsh? A bit too critical? See for yourself, I dare you. I double dog dare you.

The movie is a combination of Jaws meets Jersey Shore meets The Sopranos. And in case you didn’t get it yourself, the cast includes Jersey Shore’s Vinny Guadagnino in a cameo as a television reporter and The Sopranos’ own Paulie “Walnuts” Tony Sirico in what is basically an extended cameo as a beach club owner.

If you are still angry at BP for that drilling mishap in the Gulf of Mexico, you can take some comfort in the fact that at least they didn’t release a horde of giant albino bull sharks with a healthy appetite for folks. That’s what happens when a construction drilling company goes too far with the drill off the coast of New Jersey. The mistake releases the sharks, and people start to get eaten. It’s the Fourth Of July weekend at Seaside Heights, and Mayor Palantine (Sorvino) isn’t about to close the beaches with so much money on the line. There’s an original idea. At least it was in 1975.

There are basically two groups of young people in Seaside Heights. There are the “Guidos”, who are a group of mob wannabes and their dumber-than-rocks chicks who run around cat-fighting and spewing such wonderful dialog as “Oh no, you didn’t”. In case you missed the obvious Jersey Shore look and sound alikes, one of these girls name is Nookie. Get the idea? Now the “guidos” have been rivals to the “preppies”. These are the country club kids who wear expensive polo shirts and sip on $20 lemonades. The rivalry is getting pretty ugly when the sharks arrive, and the two groups come together to fight the swarm of really bad computer-generated fins.

I may be the only one in America who has never caught an episode of Jersey Shore or any of its numerous “reality” cousins. While I understand this movie is attempting to spoof the craze, I get the impression that they perfectly captured the annoying factor of the characters. Unfortunately, the Jersey girls aren’t the only characters that got on my nerves. There isn’t a redeemable character on the film. The only real joy I had was actually rooting for the sharks to eat many of these people before they have enough time to read another line of dialog. This thing aired on television, so it’s not like there’s a great deal of gore or nudity to distract me from how bad everything really is. If it had been rated R at least I could have enjoyed the eye candy.

I can almost envision director John Shepphird walking into SyFy’s Bonnie Hammer’s office with a stoic dead look in his eyes mumbling, “I think we’re going to need a bigger budget”. More money might have at least meant better looking sharks. The one area that this movie should have been able to beat the snot out of Jaws was the sharks themselves. It’s been nearly 40 years since Jaws, and this film couldn’t give us one clean realistic shark. Fins appear to be cartoons floating on the surface of the real water, and the “albino” sharks are more or less battleship gray with snub-nosed faces. The shark in Finding Nemo looked more realistic and frightening.

The only cliché missing from the film was a Bruce Springsteen soundtrack. Unfortunately, I think just one play of “Born In The USA” would have cost more than the entire rest of the film. That is, if you could have even gotten The Boss to allow a track to be used here. I heard in an interview recently that after watching Jersey Shore Shark Attack Springsteen announced that he wasn’t from Jersey after all. Something about his parents moving there from Delaware. OK, I made that last part up. But what I didn’t make up was how awful this film really is. If you simply must see it, look for a SyFy rerun.

Jersey Shore Shark Attack is presented in its original aspect ratio of 1.78:1. The 1080p image is arrived at with an AVC MPEG-4 codec at an average 25 mbps. If it weren’t for the really bad CG images, the high-definition presentation would be pretty solid. The fact is this is the kind of film that the more clarity and sharpness you get the worse it really looks. The film has absolutely no texture to it at all. It’s glossy and shiny to distract you from how bad it really is. Sure, black levels are solid, and the print is flawless. I’m just not sure that that’s a good thing.

The Dolby Digital TrueHD 5.1 is lively. There’s plenty of music playing, and you can hear every word of the dialog. I’m just not sure that’s a good thing.

There is an Audio Commentary with some of the crew. I hope these guys are riffing here. If not they really believe they’ve produced a Shakespearean masterpiece here.

The cover for the Blu-ray claims that a critic named Dustin Rowels delivered the following quote: “Forget the Avengers. We have a new contender for film of the summer”. If that quote is indeed genuine, most of us probably want some of whatever Dustin’s got stashed in his liquor cabinet. For my part, I had to watch the film cold sober, and I think I like Dustin’s way much better. Just one question for my colleague Dustin, “What the hell do you think you’re doing?”

Gino Sassani is a member of the Southeastern Film Critic's Association (SEFCA). He is a film and television critic based in Tampa, Florida. He's also the Senior Editor here at Upcomingdiscs. Gino started reviewing films in the early 1990's as a segment of his local television show Focus. He's an award-winning recording artist for Omega Records. Gino is currently working on his 8th album Merchants & Mercenaries. Gino took over Upcomingdiscs Dec 1, 2008. He works out of a home theater he calls The Reel World. Favorite films: The Godfather, The Godfather Part II, The Body Snatcher (Val Lewton film with Karloff and Lugosi, not the pod people film), Unforgiven, Gladiator, The Lion King, Jaws, Son Of Frankenstein, The Good, The Bad And The Ugly, and Monsters, Inc.
Touchback (Blu-ray) Titanic: 100 Years In 3D (Blu-ray 3D)