How to Make It in America: The Complete Second Season (Blu-ray) 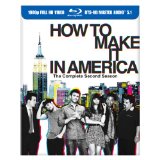 “Money, right yeah it matters, but it’s one piece of the puzzle. Let me tell you something. Sometimes who you are doing business with is a lot more important than the business that you are doing.”

When How to Make It in America season two begins, Ben (Bryan Greenberg) and his best friend, Cam (Victor Rasuk) return from their business trip to Japan after spending their new-found cash on a load of “Japanese soft cotton” hoodies they intend to silk screen with their new Crisp fashion label and find a way to mass distribute. Ben’s ex-girlfriend Rachel (Lake Bell), now unemployed, hits the job market and scores a gig with an uptight home improvement magazine. Thug with a heart, Rene (Luis Guzmán), continues his rocky road to legitimacy, enjoying the new-found success of his Rasta Monster energy drink while struggling to please his skeptical girlfriend Debbie (Andrea Navedo).

The second season of How to Make It in America tightens up the focus of the series and finds its rhythm. In contrast to Entourage, executive producer Mark Wahlberg’s other show about close friends struggling to find and maintain success, How to Make It in America feels far more authentic and honest. As in the first season, New York City remains one of the stars, and the show really knows how to capture the culture and lifestyles of the young and hip in the Big Apple. I once again found myself wanting to hang with these people.

There were times when the story felt a bit redundant, but the show does evolve and really shines when it deals with themes of loyalty and selling out. Guzman and Rasuk once again steal the show. I’ve never been a huge fan of Greenberg, but he does a decent enough job, even if he simply lacks the real charisma to be the star the Hollywood machine wants us to believe he is. I found the Rachel plotline the weakest, though Lake Bell brings a ton of charm to the role even if she does have an “angry listening face” as her new boss points out.

There is a side plot about Ben and Cam’s fashion competitors, The Neanderthals, led by the enigmatic Tim (James Ransone) whose clothing line blows up even though they disdain the fashion business. This kind of goes nowhere, even when they throw Rachel into Tim’s path for some mixed-message romantic drama. We also witness the rise and fall of Ben and Cam’s super Jewish millionaire school chum, Kappo (Eddie Kaye Thomas) which lends pathos nicely to the storyline. Things really take off when the boys meet Nancy Frankenberg (Gina Gershon), a high-power fashion buyer who may be the key to their success, but with major strings attached.

HBO announced they were not renewing the show for a third season, leaving you hanging with a couple unresolved cliffhangers. Mark Wahlberg is shopping the series to other networks, although I feel it would lose a lot if it can’t truly attain its R-rated sex, nudity and profanity. I am sad How to Make It in America didn’t make it in America, even though it often rose to levels superior to Entourage due to its realism and cultural flair. I really dug hanging out with that crowd, even though I doubt they would have me.

Each episode receives a 1.78:1/1080p/AVC-encoded transfer and once again HBO has released a beautiful looking Blu-ray. The colors remain rich in both day and night scenes. The blacks are layered and stable. Detail is sharp and really pops during exterior scenes in downtown New York. Skin tones are natural. There weren’t any noticeable compression issues, very minimal aliasing, and no digital noise.

The 5.1 DTS-HD Master Audio soundtracks impress, but don’t blow you away mainly because, being a comedy, the focus remains in the front speakers. Dialog is sharp and clear. The surround is fairly immersive, mostly noticeable during street ambience scenes. The excellent music choices prove lively and wonderfully supportive of the narrative. Subs are deep and rich, especially in the nightclubs and parties. The balance between SFX/soundtrack and dialog is spot-on.

How to Make It in America finally got its stride and was cut down in its prime. This is a decent series, but not a brilliant one. Still it was slightly more realistic and artistic than Entourage, but not as good as Sex and the City. Sometimes the hipness factor is bit overwhelming and leaves you wondering if being cool in New York is more important than being successful, but when it works, it can be inspiring. All in all it is worth watching and it is a pity it was canceled before the next season. I hope Wahlberg does find a new home for the show.

“When you’re young you have ideas and no money. When you’re old you have money and no ideas.”