Posted in: Disc Reviews by Brent Lorentson on September 4th, 2012 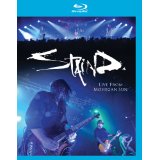 Before watching this Blu-ray my knowledge of Staind consisted of only what I’ve heard in passing on the radio.  I wouldn’t call myself a fan or go so far as to say I dislike them, I simply view (or hear) them as something to fill the void when the radio is on.  Where I did grow a bit of an appreciation for the band was in an interview that’s included on the disc that turned out to be more insightful than the standard fluff piece you may expect.

But I’m getting ahead of myself.

The concert in my opinion is split into two parts.  Part one consists of lead vocalist Aaron Lewis singing with his eyes shut while occasionally walking around.  The second part begins when he does a solo performance of ‘Country Boy’ and suddenly he connects with the audience, and we get an actual solid performance.  Not the greatest of performances, but much better than the first 40 minutes that felt like a lullaby for rock fans.

It’s hard to imagine the band has managed to stick together after 17 years, especially when you consider the bands that they’ve toured with and have outlasted.  But it seems the 17 years shows on the stage as well.  Musically they are doing everything right, and it sounds great, but there is no showmanship here.  It’s fine to be subdued with your performance, but this is supposed to be a rock concert.   Aside from a few head-banging moments from guitarist Mike Mushok, I felt like I was watching a decent open mic band at a coffee house.  On the plus side this was the first tour the band had with their new drummer Joseph “Sal” Giancarelli, and this guy brings a refreshing dose of energy to each song.  Before you can say I might be a little too harsh, I think the shots of the audience speak for itself;, seriously, I saw more energy from the crowd during Romney’s speech at the RNC.

The high points were definitely “Country Boy” and “It’s Been Awhile”, and the rest was just, I’m sorry to say, forgettable.  For the fans out there of Staind maybe you’ll read this and disagree with everything I’ve said, and I’m fine with that, we all have different tastes.  But in support of the fans out there, I feel the band should have done something…anything … to make this performance more than it was.

Throw It All Away

Something To Remind You

The video is presented in 1.78:1 widescreen in MPEG-4 AVC encoded 1080i HD.  The detail is great to the point I’m certain I could have counted Lewis’ eyelashes when they were closed during nearly every close-up.  Not much attention is given to the rest of the band with the exception of a few close- ups during solos or just the standard switching of angles for the performance.  Everything looks lifelike and the skin tones look great.  During the light adjustments there are some moments where it gets a little blown out, and there are some motion artifacts, but over all this looks good.

The DTS HD Master Audio 5.1 is the way to go when viewing this.  I switched over to the LPCM 2.0 mix to hear the difference, and a big difference there is.  With the Master Audio mix we are offered clear vocals and a sense of space with the band as they are spread through the channels.  Everyone in the band sounds good here and the audience can be heard, but it’s not distracting at all.  It’s not the best audio presentation I’ve heard, but I’ve heard much worse.

Interview With The Band (30:59) This interview moderated by former MTV VJ Matt Pinnfield is more in depth about the band than you would expect on your standard concert release.  The band is open about everything from the disputes with their former drummer, involvement with Limp Bizkit front man Fred Durst, to the fans and the fan mail received.  I got to appreciate the band a lot more after this and can listen to their music with a new perspective now.

Mike Mushok’s Live Rig (5:18) A brief glimpse backstage looking at all the guitars Mushok brings with him on tour.

Before going into this concert I wasn’t a fan, and after watching, my view hasn’t changed all that much.  I’m sure fans of the group will enjoy this, but it just wasn’t for me.  But the band has managed to have a successful career after 17 years, so what do I know?

Brent Lorentson is a horror writer and film critic based out of Tampa, Florida. With a BA in Digital Film, he co-wrote and co-directed Scavenger Hunt. His short stories have appeared in various horror anthologies. In 2019 his short script Fertile Blood will be a part of the anthology horror film Slumber Party. He is currently working on his first novel A Dark and Secret Place set to be released in late 2019. Favorite Films: Taxi Driver, Fight Club, I Saw the Devil, The Wild Bunch, Dawn of the Dead, A Clockwork Orange, Pulp Fiction, Heathers, The Monster Squad, and High Fidelity.
How to Make It in America: The Complete Second Season (Blu-ray) Once Upon a Time: The Complete First Season (Blu-ray)