Posted in: Disc Reviews by Michael Durr on September 4th, 2012 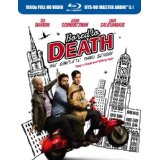 Remember when I mentioned the difficulty of reviewing a season in the middle of the show’s run? This week, I shall attempt to review two different HBO shows at the end of their respective run. Yes, I will be piecing together a show that is in its last season with very little (or no knowledge) of the seasons before. This should be a fun ride and our first entry is the third season of the HBO Comedy: Bored to Death.

Our very own M.W. Phillips was able to review the second season of this show, so feel free to check that out. He will probably be much kinder than I am.

The premise of the show has Jonathan Ames (character, not creator played by Jason Schwartzman), a detective novelist, who decides to take up his spare time as a private detective (not licensed of course). He has two friends, there is George Christopher (played by Ted Danson) who runs a restaurant named George on Jane and there is Ray Hueston (played by Zach Galifianakis) who finds fame after he draws Super Ray, a superhero with an enormous umm…lower extremity.

As we open season 3, Jonathan has published a new book entitled The Blonde in the Woods. After we lay witness to a rather unique demonstration and book signing, the gang decides to have a celebration at George’s restaurant, George on Jane. Later on, with Jonathan’s parents, Ira and Florence (played by Richard Masur and Allyce Beasley respectively) back at his apartment, he learns that Ira his father is sterile and that he was a test tube baby from a sperm bank.

Jonathan is able to get the name of the sperm bank but has no other current leads about his father except that he was Jewish and apparently very bright. Meanwhile, Ray is meeting his son, Spencer for the first time, a product of two lesbians who bought Ray’s sperm way back in Season 1. He dresses up as his alter-ego Super Ray and does his best to impress the small child. Back at the George and Jane, George meets his daughter, Emily (played Halley Feiffer) for lunch.

Emily has a new boyfriend, Bernard (played by David Rasche) but unfortunately for George, he is also pushing sixty and much too old to be with his daughter. Later, Jonathan is busy following a woman in a distinct yellow hat for a case he is working. He follows her back to the hotel room and then phones his client. However, in a bit of foolishness he rushes the door when he hears the lady scream. He promptly gets knocked out on the back of his head by an unknown assailant for his efforts.

Ray is still on his scheduled visit with his new son, Spencer. He has found a rather unique way of getting the child to stop crying involving whiskey and his own nipple. Anyway, in a hotel room, Jonathan wakes up. He has a gun in his hand, his pants are around his ankles and there is a dead man on the bed with a bullet in his head. The police are soon coming to the door to check out the scene, but Jonathan is able to escape while he figures out what happened.

Jonathan escapes back to his office and needs a nice long drink. Meanwhile, George tries to talk to his daughter, Emily about the older man she is seeing. However, despite his attempts, she is content on marrying him. Back at the office, Jonathan hears a knock at the door, it is again the police. His only option seems to be to go out his window. However, his window is at the top of a large tower building. When we see Jonathan next, we notice he is hanging from a clock which does not have very long before it his :30 as we fade to black.

The main stories for season three center around Jonathan’s attempt to find his biological father, George’s attempt to accept his daughter’s boyfriend and Ray’s on and off again relationship with Leah (played by Heather Burns) which leads him down at one point on the road of elder love courtesy of Belinda (played by Olympia Dukakis). All of these make for a very tight fitting eight episodes which does polish off in dramatic fashion.

The best job here is clearly the work of Ted Danson who plays a poised and polished George who often finds himself in fits of pot induced hallucinations. Jason Schwartzman and Zach Galifianakis both do a reasonable job but rarely steal any particular scene. I also enjoyed the wide use of guest stars including Patton Oswalt, Mary Steenburgen, Oliver Platt and Stacey Keach. But that is unfortunately where the praise ends.

Bored to Death suffers from quirkiness for the sake of quirkiness. This means that often they find the most extreme way of carrying out a certain scene just for the sake of the biggest shock. Elder love, whiskey nipples, bedroom turned into a lava lamp scene preceded by Burlesque dancing, and of course the ridiculous plushies are all a part of this season. It seems like they spent too much time trying to consider what extreme avenue to take next rather than continue to develop the story.

From reading the back cover as well, I thought that this show would also focus on Jonathan’s cases which are what drew me to the show in the first place. Outside of the times they decide to go back to Jonathan finding his father, those occurrences are few and far between. This is more the show about three friends who smoke a lot of pot, have failed relationships and get into quirky situations. It’s a buddy comedy for those looking for an “R” rated plot that never quite delivers.

The video is presented in 1.78:1 anamorphic widescreen at 1080P. This is the usual strong video from the people at HBO Home Video. This takes place in Brooklyn as one could guess and it is a fine representation of the city. Even the graffiti somehow looks beautiful and adds to the landscape. Colors are strong, flesh tone is accurate (though Ted looks decidedly peakish and Zach’s beard is completely wild), and the use of plentiful locations make this a winner.

The audio is presented in 5.1 English DTS-HD (French DTS 5.1 and Spanish 2.0 DTS mix also included). The audio is equally as strong as the video. The opening theme by Coconut Records comes blaring in and since the show does use a lot of music, we frequently get robust interludes. Dialog is strong most of the time, occasionally Jason or Heather would come in a little soft, but that has to do with their voices. Since environment is important, we also get a lot of surround type effects which certainly adds to the show. Subtitles include English SDH, French, and Spanish.

Bored to Death was cancelled on December 20th, 2011 after three seasons and twenty four episodes. Unfortunately, due to Zach and the show’s premise it certainly had a cult following. However, there is word that perhaps a television movie might be made in the near future. Anyway, season three was unfortunately not that entertaining for me and I felt the show spent too much time in its absurdness and how many odd things we can make the main characters do.

The blu-ray presentation on the other hand was certainly stellar. The video was great and the audio was superb. The extras on the two discs showed an attention to detail and are great treats for the fans of the show. If you are a diehard fan of the show you don’t really need me to tell you to get it. However, for first time fans who stumble onto this show, I can’t recommend it unless you are just attached to one of the stars (or frequent guest stars) of the show. Unfortunate, but sometimes one can tell when a show has outlived his usefulness.

Michael Durr has been reviewing movies for the better part of fifteen years now. He primarily enjoys thrillers, sci-fi, animation and even a little courtroom drama. His favorite films include Escape from New York, the Goonies and anything with Alyssa Milano. When he’s not praising Kurt Russell as the greatest actor of our time or scratching his head over a David Lynch flick, he’s spending time at home in Texas with his lovely wife, Lori and his amazing son. How they put up with him is a mystery, but even Basil Rathbone doesn’t have the time to solve that one.
White Vengeance (Blu-ray) How to Make It in America: The Complete Second Season (Blu-ray)