Once Upon a Time: The Complete First Season (Blu-ray)

Posted in: Disc Reviews by Gino Sassani on September 5th, 2012 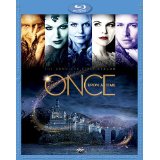 “There is a town in Maine, where every storybook character you’ve ever known is trapped between two worlds, victims of a powerful curse. Only one knows the truth, and only one can break her spell.”

ABC has had a very important asset going for it for years. It’s one that the network has seldom taken any advantage of. That asset is its parent company. You see, ABC is part of the Walt Disney family. With the rich history of stories the studio has in its arsenal going back to the 1920’s, it was only a matter of time before some clever people decided to find a way to use that rich history in a television series. That time has arrived and the result is Once Upon A Time. It’s the most clever and original series to hit the tube in a long time.

In the land of fairy tales it’s an important day. Snow White (Goodwin) and Prince Charming (Dallas) are finally about to get married. All of the big fairy tale characters are there, and the entire fairy tale world has gathered in celebration. It’s a happy day, indeed, until the wedding is crashed by the Evil Queen (Parrilla). She’s got a thing about happy endings, and she’s about to take away everyone’s happiness in one fell swoop. She’s enacted a dark curse that will transport everyone to a world where there is no magic and they have lost that which was most important to them. That world happens to be our world, more specifically Storybrooke, Maine. In this New England town time has come to a grinding halt. These people are stuck in mundane lives that will just go on and on. It’s a little like Hotel California. You can check out, but you can never leave. No one can enter or leave the town. They do not remember who they once were. Loves have been lost. Hope, it seems, is also gone.

But the fairy folks gave themselves an out to break the curse. Snow White’s daughter Emma (Morrison) has been spirited away to a safe place away from the coming curse. It is prophesized that on her 28th birthday, she’ll find her family and lift the curse. You see, true love can break any curse.

Enter Emma on her 28th birthday. She’s a bounty hunter and very much alone. That was until a knock at the door brought her face to face with 10-year-old Henry (Gilmore). He’s the son she gave up for adoption. He’s found her for a very specific reason. Henry has a storybook, and he’s the only one who knows that it’s all true. He knows who these people used to be, and he knows that it’s Emma’s destiny to come to Maine and break the curse. Of course, she doesn’t believe a word of it, but she takes Henry home anyway. There she discovers that Henry’s adopted mother is Regina, the town’s mayor and also the aforementioned Evil Queen. Snow White is Mary Margaret and an elementary school teacher. Jiminy Cricket (Sbarge) is a therapist. Prince Charming is a coma patient at the local hospital. Red Riding Hood is Ruby (Ory), a waitress at the local diner and bar, Granny’s, run by, you guessed it…. Granny (Elliott). There’s also the local pawnbroker and feared deal-maker Mr. Gold (Carlyle) who is really the devilish Rumpelstiltskin.

Emma decides to stay when she meets resistance from Mayor Regina and begins to fear for Henry’s safety. She ends up the town sheriff where she must deal with Regina’s evil plots to interfere with her performing her foretold part in freeing the characters.

The series will often remind you of Lost. That’s no accident, either. You’ll find plenty of Lost cast and crew members throughout the show’s credits. There is also a deep-rooted mythology of symbolism that plays very much like the mysteries of Lost. There is also that feeling of isolation. Only Emma and Henry can come and go from the town.

Each episode splits its time between the happenings of Storybrooke and back in the time before the curse. Although the Snow White story is the prominent tale here, these flashbacks reveal a complicated integration of many characters and stories from various tales. You’ll find characters like Cinderella, Belle, Pinocchio, King Midas, Hansel & Gretel, and even a werewolf or two as part of these story-land segments. And, of course, each has a corresponding character stuck in Storybrooke. The fairy land segments are heavy in green-screen and quite imaginative and larger than life. That part of the tale is not linear, and we go from time to time in those days before the curse. It all adds up to background information that does help to piece the final solution to the puzzle together. You’ll find lavish costumes and fanciful creatures. The familiar tales will interact in ways unlike how we remember the tales. Rumpe1stiltskin becomes the Beast to Belle’s Beauty, and Red Riding Hood becomes the werewolf story we always knew it really was.

The cast is also quite good. Robert Carlyle steals every scene he is in. He also has the most diversity between his Storybrooke character and is fairyland character. Rumpelstiltskin is quite a prominent character here and the only one who remembers who he really is and why he’s here. He’s installed his own back door to keep him from falling under the Evil Queen’s thumb. Carlyle certainly gets to have the most fun as the flamboyant Rump and delivers the most maniacal and hideous giggles in the role. His face is painted gold. As the “mundane” Mr. Gold he’s merely cold and calculating and a convincing devil character at all times. Still, you never really quite know which side he is truly on. Ginnifer Goodwin and Lana Parilla have too close a look to be as distinctive as the characters should be. Parilla is by far the more convincing and better performance. Of course, it really is more fun to play evil than it is to portray good. Raphael Sbarge is terribly underused as Jiminy and doesn’t appear in almost half of the episodes. He’s the show’s grounding character and certainly should have more to do. Young Jared Gilmore is infectious as Henry and shows a lot of energy and passion in the part. Of course, the true lead here is Jennifer Morrison as Emma. She doesn’t really have a counterpart in fairyland, so she doesn’t get to stretch the performance as much. Maybe that’s for the best. She represents us here and we see, at least the mundane world, through her eyes.

Once Upon A Time – Origins: There is no time code on this feature. You get a look at some of the original fairy tales that dominate the series. For each Josh Dallas provides background on the story and some information on the tale’s evolution.

Fairy Tales In The Modern World: (20:27) Cast and crew talk about their own takes on various fairy tales and, of course, offer some input into the way they’re integrated into the series.

Building Character: (7:20) The creative team talk about various aspects of the show from rewriting the fairy tales to finding just the right actor to bring each one to life. There’s a look at costume design as well.

Welcome To Storybrooke: (6:46) A visit to the real Canadian town of Steveston which doubles as Storybrooke.

The show was more entertaining than I expected. I’m not much of a fairy tale kind of guy, but there’s always been something about the Disney magic in their own storytelling that has managed to capture my own imagination. The show will hook you in spite of your own reservations. This is absolutely the best way to enjoy it. There’s no waiting for what comes next. It’s a series made for Blu-ray and quite family friendly. Don’t be surprised if you can’t watch just one at a time. After all, “Magic always comes with a cost”.

Gino Sassani is a member of the Southeastern Film Critic's Association (SEFCA). He is a film and television critic based in Tampa, Florida. He's also the Senior Editor here at Upcomingdiscs. Gino started reviewing films in the early 1990's as a segment of his local television show Focus. He's an award-winning recording artist for Omega Records. Gino is currently working on his 8th album Merchants & Mercenaries. Gino took over Upcomingdiscs Dec 1, 2008. He works out of a home theater he calls The Reel World. Favorite films: The Godfather, The Godfather Part II, The Body Snatcher (Val Lewton film with Karloff and Lugosi, not the pod people film), Unforgiven, Gladiator, The Lion King, Jaws, Son Of Frankenstein, The Good, The Bad And The Ugly, and Monsters, Inc.
Staind: Live from Mohegan Sun (Blu-ray) Sons of Anarchy: Season Four (Blu-ray)