Posted in: Disc Reviews by Michael Durr on September 9th, 2012 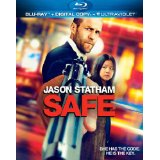 One of my strongest assets is my ability to compute numbers. It has helped me to excel at my paying position in the workforce as well as stay ahead when it comes to my finances. However, to date I have never really been placed in a position where my mastery of numbers would determine life or death. However, our movie today, Safe does involve a girl named Mei whose very life indeed could end on the basis of whether or not she can properly remember her numbers.

As our story opens, we find ourselves in a subway with a Chinese girl named Mei (played by Catherine Chan) who is very scared and alone. But if we transport ourselves just an hour earlier, we find that same girl in front of the Russian mob. Emile Docheski (played by Sandor Tecsy) demands that Mei give him the numbers. Numbers? Well, to understand that we need to travel to a year ago.

We watch as Mei at a young age impresses her fellow classmates. This eventually lands her in a very special school for the gifted and talented. Meanwhile, an MMA fighter named Luke Wright (played by Jason Statham) enters the cage against an Internet sensation. One punch later, the sensation meets the mat and finds his way to a hospital with permanent brain damage. The bookie is not happy and lets Luke knows that he was supposed to take a fall and now the Russian mob is quite upset with the fighter.

In another land, we watch as Han Jiao (played by James Hong) talks to Mei and tells her that she has a new father named Chang (played by Reggie Lee) and that her life will now be a series of counting and memorizing numbers. Life drastically changes for Luke as he rushes home only to see his wife brutally murdered at the hands of the Russian mob. He also learns that he is to spend the rest of his life along as anybody that becomes a friend or lover of Luke will meet the same fate.

Mei now spends her life reciting profit numbers for Chang while threats of harm to her mother hang over her frail head. Meanwhile, Luke spends his life at a shelter, afraid to even talk more than thirty seconds to person or child. Despite his attempts to hide, he is even framed for murder and thrown out of a local shelter. However, the story takes a far more interesting turn when just a few blocks away, Mei is asked to memorize a very special and long number.

However, just a short time later, the Russian mob kidnaps the young girl. A mere distance away, Luke has the tar beat out of him by local cops as the audience learns a deadly secret. Mei then escapes from the mob when the police storm the location. Soon we find ourselves back at the subway where the story begins. But it comes with a new wrinkle as we see Luke one step away from the tracks contemplating to end his life. As he turns his head, he sees Mei for the first time and makes the decision that will forever alter the course of both their lives.

Straight-forward action movies can often produce an occasional gem. But more often than not, it becomes just an average action movie. Catherine Chan has to be commended for her excellent coming of age performance as well as Reggie Lee who performed a perfectly adequate antagonist. Jason Statham gives his usual performance which is likable but does not really go anywhere important. Robert Burke who plays police Captain Wolf steals every scene he is a part of in a sea of faceless police personnel.

But that is where the praise ends for the most part. I for one was not happy with the lack of screen time that Catherine and Jason spent together. It was almost as if they were acting in two different movies and then together for the important moments. Also, despite the dynamic sound design, the action is fairly average and does not really grip outside of the first scene. Perhaps, I am used to the prototypical Jason Statham action picture but this does not do anything special.

The video is presented in 2.35:1 widescreen in 1080p resolution. This movie does a really good job of masking its locations while still giving a sense of grandeur. It was actually shot in Philadelphia and New York City. For example, parts of Philly were used to depict a downtown China. The clarity is good and there is excellent quality all around for a reasonable action flic. The detail can easily be seen especially in facial tone.

The audio is presented in 7.1 English DTS-HD Master Audio. If you ever wanted a hard hitting action movie full of fantastic sounding bullets and other various packed effects, this is the movie for you. Dialog is probably the only true weak point with the plethora of accents including Asian and Russian as well as cop English as I like to call it. But sound design overall is again excellent and is worthy of the 7.1 label. English, English SDH, and Spanish subtitles are also included.

Jason Statham is a great action star, bar none. Transporter, Italian Job and his Expendable roles are all worth watching again and again. However, Safe is really just safe. It does not really break any barriers and unfortunately feels like a couple of movies thrown together rather than one harmonious picture. There are so great characters (Chang and Wolf mostly) but more than often than not just seems kinda bland.

The disc is excellently produced with above average video and an extremely well done sound track (outside of the dialog). The extras while not especially numerous provide a lot of punch to those who do love Statham’s work or enjoy the movie on its own merits. I can not really recommend or dis-recommend this movie. It is one of those films that really fall in the middle. There is some good here, but not enough to make it meaningful.

Michael Durr has been reviewing movies for the better part of fifteen years now. He primarily enjoys thrillers, sci-fi, animation and even a little courtroom drama. His favorite films include Escape from New York, the Goonies and anything with Alyssa Milano. When he’s not praising Kurt Russell as the greatest actor of our time or scratching his head over a David Lynch flick, he’s spending time at home in Texas with his lovely wife, Lori and his amazing son. How they put up with him is a mystery, but even Basil Rathbone doesn’t have the time to solve that one.
For the Love of Money Goats (Blu-ray)