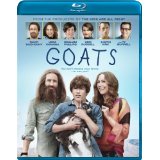 If you have a low tolerance for quirky indie comedies, just listening to the premise of Goats might be enough to make you gag. The film follows Ellis, a responsible 15-year-old Tucson boy who decides to attend a prestigious East Coast prep school. Left behind are his flaky, New Age-y mother and Goat Man, a pool man/weed grower who is also Ellis’s primary father figure. In case you’re already rolling your eyes, let me assure you there’s slightly more going on here than quirk for quirk’s sake.

The central joke is that the most stable adult Ellis (a mature, non-showy Graham Phillips) has ever known is Goat Man (David Duchovny), a kind soul who appears, at first glance, to have worse hygiene than the goats he spends most of his time with. Then again, Goat Man pretty much wins by default because Ellis’s mother Wendy (Vera Farmiga) is more interested in her own spiritual rituals and new boyfriend (Justin Kirk) than she is in trivial things like paying her bills. (Ellis handles all the finances.) Wendy, however, is lucid enough to become enraged when Ellis decides to attend Gates Academy, the same prep school where his father (Ty Burrell) studied.

Once Ellis arrives at Gates, the film becomes more of a coming-of-age tale with Ellis trying to figure out who he is, and whether he’s more like his nutty mother or his strait-laced dad. Still, Goats — which comes “from the producers of Juno” — doesn’t fully leave the quirk behind. (One of those producers has a weird obsession with high school cross country teams, for example.)

The result is an uneven, thoroughly enjoyable dramedy carried by fantastic performances across the board.

Ellis is as bright and resourceful as Juno MacGuff, but he’s also considerably more morose. (He has a reason to be; his parents aren’t nearly as awesome as Juno’s.) The gangly, deep-voiced Phillips still manages to infuse his character with enough intelligence and low-key charisma to make you root for a connection between Ellis and…either of his parents! Farmiga impressively commits to flightiness as Wendy, who is terrified of being a “mainstream mom.” Meanwhile, Ty Burrell successfully re-calibrates his dorky Modern Family persona and nicely underplays the role of Frank (or “F—er Frank” as Wendy not-at-all affectionately calls him), a man trying to re-connect with his son. (Phil Dunphy would never let himself get estranged from any of his kids.)

Duchovny is at his deadpan best — and taps back into his sleepy Fox Mulder delivery — as GoatMan. The scenes between Ellis and Goat Man should be ridiculous, but they feel pleasantly natural. Kirk is hilarious as the spectacularly jerky Bennet, who clashes with Goat Man.The cast also features a few notable actors — Anthony Anderson, Alan Ruck, plus I’m pretty sure I saw an uncredited Minnie Driver toward the end — in bit parts. Keri Russell (Felicity) also pops up as Frank’s impossibly nice new wife. (At least Ellis believes it’s impossible an adult could be so nice.)

All of these characters and storylines could easily fill a 100-minute movie, but the biggest problem with Goats is that it attempts to cram all this and more into its 94-minute running time. I’m ok with keeping the stuff involving Ellis’s damaged roommate (Nicholas Lobue) at Gates, but the stuff involving a hot neighbor (Adelaide Kane) and a literate girl who may or may not be a prostitute (Dakota Johnson, daughter of Don Johnson and Melanie Griffith) could’ve easily been jettisoned. It’s like they gave Ellis a love interest because every protagonist has to have a love interest. And I haven’t even mentioned the gay mailman.

Director Christopher Neil — working from a script by Mark Poirier, who also wrote the novel on which this film is based — has made a beautiful-looking film (more on just how beautiful in a minute) that seems to have an equal amount of disdain for both hippies and yuppies. The point seems to be that neither extreme is desirable.

Goats is presented in its original aspect ratio of 1.85:1. The 1080p image is arrived at with an AVC MPEG-4 codec at an average of 23 mbps. Neil shot his feature film debut on location in Tucson, and the Sonoran Desert landscapes are the stars of this Blu-ray. (Though the slightly more muted Gates Academy scenes weren’t too shabby either.) The Tucson sequences feature deep, saturated colors and nice texture while providing an exceedingly sharp image. There’s a subtle contrast between the look of the Tucson scenes and the stuff at Gates that is achieved without resorting to overt visual tricks. Blacks are terrific (mostly glimpsed during the East Coast scenes) and cinematographer Wyatt Troll deserves a big pat on the back.

The DTS-HD Master Audio 5.1 track initially didn’t offer as much immersion as I’d expect from a movie that mostly takes place outdoors, devoting its attention instead to the score and soundtrack. Eventually, we get a bit of atmospheric noise (birds and an airport scene in Tucson, traffic in the East Coast portions), but nothing overwhelming or intrusive. There’s good balance overall (nice, detailed work on sound effects, in particular) and the dialogue in this dramedy comes through as clear as a bell.

Moments: The Making of Goats: (10:37) This featurette is as lovingly-shot as the film itself and eschews talking head interviews in favor of behind-the-scenes footage (including material not in the film) of the cast and crew on location. Unfortunately, there isn’t a ton of insight into the actual making of the film. Presented in HD.

The Mailman’s Lament: (2:29) This oddity consists of a still picture of Goat Man with the Mailman character, while the latter muses about the hard life of a letter carrier over a reggae beat. (“We know more about you than you know”; also, it turns out January is a busier month than December for mailmen.) Totally random and unnecessary. I should’ve known this was going to be a waste of time when I saw that the Blu-ray case listed this special feature as “The Mailman’s Lement.” Presented in HD.

Home Movies: (2:50) Extended footage of Goat Man with Ellis as a baby. A bit of this stuff was used at the beginning of the closing credits. A nice idea, but nothing really happens except for the director popping into the frame at the very end. Presented in standard definition.

Deleted Scenes: (1:18) A pair of totally expendable deleted scenes. You do get to see more of Duchovny’s butt. (In case you didn’t get enough during the movie.)

Goats is the rare coming-of-age story where the main character doesn’t really come of age. In fact, none of the main characters appear to be markedly different people than they were at the start of the movie. (With the possible exception of Goat Man.)

Yet, that’s kind of what I liked about it. I don’t think I’m giving anything away when I say that the film doesn’t end with everyone in Ellis’s family coming together for a joyous dinner party. Ellis doesn’t have some giant epiphany. Instead, he takes some baby steps toward understanding the people around him. Rather than showing you a “happily ever after”, this movie merely hints that it could maybe go that way some day. A movie where none of the characters really change has the potential to be a snooze-fest. Goats addresses this concern by (over)stuffing its story with enough plotlines and eccentric characters to keep us busy.

At the very least, you can pop in this Blu-ray and enjoy the scenery.