Posted in: Disc Reviews by Gino Sassani on October 1st, 2012 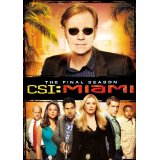 All good things must come to and end. Fortunately, the same can be said for the not-so-good things as well. I’ve been calling it the weakest link in the CSI franchise since the year it first hit our television screens. It looks like the ratings and your opinions have supported that feeling, and CSI: Miami is finally going the way of the dinosaur, both on television and in reality… extinct.

The series followed the CSI model set forth in the original Vegas version of the franchise. The lead CSI here was Horatio Caine, played by former NYPD Blue  actor David Caruso. Caruso left that series because he fancied himself better as a big movie star. Several failed leading roles later he finds himself back playing virtually the same character here. It’s the same Caruso odd speaking pattern, only this time he has a lab coat to go with that gun. Adam Rodriguez plays Caine’s favorite among his lab partners, Delko. He shares a bit of history with Delko. They’ve had a few off-the-reservation missions together and have bonded somewhat. Delko wants to be just like Caine. Next in the pecking order is Ryan Wolfe, played by Jonathan Togo. Togo is the Greek-tragedy character here. It seems that every year this guy is getting the worst of it, from losing his hearing to getting roughed up by the Russian mob. He was a cop and transferred over to the CSI unit in season 2 under Caine’s wing. Emily Procter plays Calleigh. She’s the ballistics expert and all-around tough girl with a disarming southern accent. She makes a living by being underestimated. By far the most annoying character is Eva La Rue’s Natalia. Her love lives and former life baggage turn her more often than not into the helpless whimpering damsel in distress. She’s by far the most frustrating character in the entire franchise. Now I won’t have to hear her whine one more season… Rex Linn plays the crew’s uniformed cop buddy, Frank Tripp. He’s getting more and more screen time and acts as the audience’s representative on the show. He’s a good tough cop, but the science just goes over his head. New to the 7th season was Megalyn Echikunwoke, please don’t make me spell that last name again, as the new medical examiner on the series, Dr. Tara Price. She’s a huge change from the previous pathologist whom I’m sure fans are already missing. She’s got a bit of a ‘tude. She also flirts too much, while Alex always had this almost unnatural respect for the dead. The best new character and one I will see sorry to go is young Omar Benson Miller, who played Walter on the show for just the last couple of seasons. He brought the freshness the show so desperately needed. I will miss him a lot.

Each episode of CSI Miami is presented in a 1.78:1 aspect ratio. There isn’t anything at all to complain about in the transfer. Colors are bright and vibrant, always jumping from the screen in wonderful detail. Sharpness is tight, perhaps too tight. The overall look leads to a bit too much of a sterile feel. Like the plethora of models who strut their stuff on the show this year, there isn’t a blemish to be found. Black levels are rock solid. Flesh tones are a bit too bright, but this is apparently an intended effect.

The Dolby Digital 5.1 track is as sharp as the picture. All of the dialog comes through just fine. The musical montage moments always sport a dynamic range of sound from lows to highs; there is excellent production value all the way around.

Miami Meet Mother Nature: (14:58) The series brings a midwestern-style tornado to the show, and this is a peek at how it was all done.

A Perfect Ten: (20:53) This is the usual season summary. They do not appear to be aware that this was going to be the last season.

A Trip To The Set: (17:15) Rex Linn gives us a tour of the production departments.

The Miami Look: (11:20) Okay, this was filmed in L.A., so I wish they’d stop talking about capturing the Miami look. If they wanted that, they’d film in Miami.

Love it or hate it, it’s gone. This set offers you your very last chance to share some quality time with these characters. I suspect they could turn up in the other shows, but I doubt you’ll see any of them join the other casts. Of course, nothing is ever never in television land. For now, “This is most definitely the end of the line”.

Gino Sassani is a member of the Southeastern Film Critic's Association (SEFCA). He is a film and television critic based in Tampa, Florida. He's also the Senior Editor here at Upcomingdiscs. Gino started reviewing films in the early 1990's as a segment of his local television show Focus. He's an award-winning recording artist for Omega Records. Gino is currently working on his 8th album Merchants & Mercenaries. Gino took over Upcomingdiscs Dec 1, 2008. He works out of a home theater he calls The Reel World. Favorite films: The Godfather, The Godfather Part II, The Body Snatcher (Val Lewton film with Karloff and Lugosi, not the pod people film), Unforgiven, Gladiator, The Lion King, Jaws, Son Of Frankenstein, The Good, The Bad And The Ugly, and Monsters, Inc.
Portlandia – Season Two (Blu-ray) Winner’s Circle September