Posted in: No Huddle by Gino Sassani on October 9th, 2012 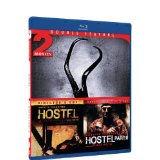 As a film, Hostel is in a class of its own. It takes the “disturbing gore” genre to a whole new level. There isn’t much in between ground for this film. You will either really enjoy the film or you will be very much disgusted. The plot of the film revolves around two college students and a friend they recently met as they journey across Europe. They are looking to have a good time and “meet” as many women as possible along the way. They journey from Hostel to Hostel. At one point they are starting to feel as if they have hit their peak. This changes when they are getting high with a local named Alex who recommends this Hostel he knows of in the small country of Slovakia. Supposedly at this Hostel the girls are more beautiful and are turned on even more by American men.

It turns out this Hostel is just a trapping ground for a torture warehouse. The warehouse is run by a business whose clients pay great sums of money to torture and kill people. The prime targets are young foreign men and women. They are lured to this particular Hostel with the promise of fun and pleasure and are eventually sold off to the highest bidder to be brutally maimed. It is labeled as a horror movie, but it’s not really scary. The scenes when the torture and mutilation occur are at times difficult to watch. They are very realistic and not for those with a weak stomach.

I have to give Eli Roth some deserved credit here. With the success of his disturbing Hostel, there must have been an incredible temptation to deliver merely more of the same and be content with raking in the millions without actually having to work for it. Money For Nothing, as the song goes. The risk here is that the frenzied fans of the original would leave this film somewhat disappointed, as I imagine many were. That’s not to say that Hostel Part II doesn’t contain some very Hostel-like moments of torture and gore, but it’s safe to say this film is not nearly as gratuitous as the first. Instead Roth decided to bring us a far more developed story this time around. We get far more insight into the Club and how it works. We actually get to know two of the members in some detail. Putting more developed faces on that end of the spectrum really makes this, in the end, a far more frightening film. The Club is no longer an enigmatic and unlikely group of aberrant sickos the likes of which most of us can feel safe enough that we will never meet. Now these people are the average Joe next door, albeit with more walking around money than most of us will ever see. We also get a more detailed look into the selection process and bidding on the victims. All of this only strengthens the film, unless of course you’re just in it for the blood. Not that there’s anything wrong with that.

For starters we get three female victims this time instead of guys. I know exactly what you’re thinking. That means more nudity and maybe some kinky kills. That would be the easy way out. Instead Roth avoids falling into the strictly gore porn trap and fleshes out these characters by actually showing less flesh. How’s that for going against type? We get to know these girls more through their performances as actors than their acrobatics. Once inside the Club there appears to be less blood and guts as well. There is really only one memorable torture kill before the climax. The first of the girls is hung upside down over a tub, of sorts. Another woman lies underneath and cuts our hapless victim, ultimately bathing in her blood. Unfortunately from there the film remains quite tame until the climactic twist. The ending is clever in its result but brutal in its depiction. The last thing a guy wants to see is a graphic castration. So, what promised to be the ultimate guy film turns out to be far more female-friendly than you would expect.

Hostel Part II takes some time to wrap up the events of the first film before embarking on a new adventure. Paxton (Hernandez), the surviving member of the first film, is recovering from his wounds. He’s having nightmares and is in hiding with his girlfriend at her grandmother’s house. The stress of his experience is driving him crazy, and let’s just say he loses his head over the entire affair. Next we meet three coeds in Rome on a train, Lorna (Matarazzo), Beth (German), and Whitney (Phillips). They are tired of being harassed and want a nice quiet time together. They meet Axelle (Jordanova) who promises them exactly that at a spa. At the spa things quickly go wrong as each of them are kidnapped and taken to The Hunting Club, where their pictures have been entered into auction for the chance to torture and kill them. Two brothers win two of the girls and are amping themselves up for the experience. Stuart is excited, but Todd is a little nervous about the festivities. The rest of the film, of course, covers the activities inside the Club.

Another huge surprise here is that there is some rather good acting in this film. Czech actor Milan Knazko plays Sasha, the executive of The Club. Without saying much, he’s a menacing character with an almost aristocratic demeanor. You can’t help but see some Hannibal Lecter in him. Richard Burgi and Roger Bart play brothers Todd and Stuart. These are your average guys next door who bid on torturing and killing the girls. They offer a little comic relief, but more importantly a frightening more realistic perspective to the entire film. Through these characters Roth takes the time to linger on the moral aspects of the film as well as give us a closer look at the Club’s inner workings. Their journey is a highlight of the movie. The Bubblegum Gang returns as well, for a nice homage to the first film. Finally Roth works in cameos for some of his favorite European film figures. Nice little scenes appear for the likes of: Edwige Fenech, Ruggero Deodato, and Luc Merenda. You’ve got to admire the respect Roth has for those who came before him.

This film is definitely not for everyone. In fact if you don’t enjoy the gore genre, then you should stay far away. But if you do, then this is definitely a must-buy. I enjoyed the film and thought it was done extremely well. The transfer, even though I don’t believe it could be great due to the way it was filmed, still looked very good and gave you great detail throughout. The sound was extremely well done and made the screams seem as realistic as possible. A very solid presentation and not a torture to watch by any means.

If you like this sort of thing, I’m sure you will enjoy this second entry into the world of Eli Roth’s Hostel. It won’t be as bloody as you are expecting, but if you give it half a chance I think you might like the evolution of the extreme-slasher or gore-porn genre. Like any fad, this form of horror film must evolve if it’s to last beyond the early splashes. I think Roth has taken a positive step with Hostel Part II. This isn’t a masterpiece, but it has taken this fledgling genre “to the next level”.

Gino Sassani is a member of the Southeastern Film Critic's Association (SEFCA). He is a film and television critic based in Tampa, Florida. He's also the Senior Editor here at Upcomingdiscs. Gino started reviewing films in the early 1990's as a segment of his local television show Focus. He's an award-winning recording artist for Omega Records. Gino is currently working on his 8th album Merchants & Mercenaries. Gino took over Upcomingdiscs Dec 1, 2008. He works out of a home theater he calls The Reel World. Favorite films: The Godfather, The Godfather Part II, The Body Snatcher (Val Lewton film with Karloff and Lugosi, not the pod people film), Unforgiven, Gladiator, The Lion King, Jaws, Son Of Frankenstein, The Good, The Bad And The Ugly, and Monsters, Inc.
Demetri Martin: Standup Comedian Courier, The (Blu-Ray)