Posted in: Disc Reviews by Michael Durr on November 13th, 2012 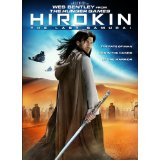 As a moviegoer, I love my share of epics. The bigger the storyline, the bigger the world, the more I probably enjoy it. Oh, it has to be sci fi/fantasy related too. Fantasy worlds in particular are often amazing since the creator is making it up from scratch. Today, we visit the world Aradius, a land where a very special mineral plays a very important part in the story. The story you ask? The story of Hirokin, the Last Samurai. Let’s explore, shall we?

Let’s start with a little back story. Humans came to the planet of Aradius to trade for Aradium. This special mineral allowed massive metal objects the ability to float. Well as with any precious mineral, it was soon depleted and most of the humans left. However, the planet of Aradius was left with its kinfolk succumbing to disease, refuse and infertility. The Arid people (who we could tell the difference from humans from the veins in the palm of their hands) were ruled by humans who wanted them wiped from the planet.

But the Arid people were led by a man named Moss who called for a rebellion. He would not stop until the one day where he could vanquish the evil tyrants. We open our movie with the lead viceroy known as Griffin (played by Julian Sands). He has three people in interrogation and he is asking information to the whereabouts of the Rebellion leader. None of them will give up Moss, and so he slits their throats, 1, 2…and stops at the third one.

The third one does not offer anything either but Orange, the viceroy’s female follower (played by Jessica Szohr) reminds the viceroy to spare some of the Arids so that they can continue to have slaves. He decides to send the third one to the pit. In the next scene, we see our hero, Hirokin (played by Wes Bentley) walking among the sands. The man is on path to an Arid camp where he hopes to help. However, the people are untrusting of him since he is human.

But when a team of deacons led by a man known as the Kore (played by Daz Crawford) infiltrate the Arid camp, Hirokin is forced to defend it. However, despite Hirokin’s skill at sword flying and fighting he is not able to save the city. He does however escape with a lone Arid woman to the caves of the meager planet. We go to black. The next thing we see is that Hirokin wakes up cold sweat. Seven years has passed since the Arid camp massacre. The human is certainly worse for wear.

Hirokin is woken up by the Arid female (who is now his wife) named Terra (played by Mercedes Manning)who left the camp with him. They now have a male child as well named Nuran (played by Joseph Desmond). Hirokin does the best he can for his family by bartering for precious items and things needed to survive. But the scene turns grim when a deacon patrol combs the area and finds evidence of the family.

As much as Hirokin again tries to fight off the impending horde, it is all for naught. He is knocked out and sent to the pit while his family is imprisoned. Before his inevitable fight, he is locked up in a cage until he is visited by a man named Honsu (played by Rodney Charles) who gives him a mysterious root. The challenge lays before Hirokin, a fight in the pit with his family’s lives at stakes. Can he survive and eventually find the man simply known as Moss (played by Angus Macfadyen)?

My hopes for this movie were unfortunately not much after I realized that Lionsgate did not even bother to release this in Blu-ray. That’s usually a bad sign. So low expectations coming in, and I can say they at least met those expectations. Casting is very good and the story is worthy of being called an epic. Costume design is also about as good as one can do based on the small budget. However, all the costume choices, casting and intended story in the world does not mean much if the production value is zilch.

This movie comes off as if it were trying to be the pilot for a television show in the vein of Hercules, Xena, Legend of the Seeker, etc (if they had just made a couple of different decisions with the plot). That’s not a bad thing. I love those shows. It has the hero, it has the villain, it has the ugly henchmen, it has the comic relief, it has the sidekick, it has love interest, etc. It screams television syndication but then it completely wastes it by lacking depth and most importantly, lacking the execution to make it interestingly.

It drags, quite a bit and furthermore Hirokin’s journey from common man to samurai is hardly believable. Even when he makes it to samurai, he does not seem all that special and they really needed more work with the fighting choreography. I had zero issue with the sword throwing but they needed to sell the fact that it required Aradium to do it better. Details are forgotten in this little tale all the time and by the time we might start caring, the movie ends. There is so much wasted potential and that’s really what hurts most.

The video is in 2.40:1 Widescreen presentation. It is hard to create excellent scenery but this movie is greatly helped by the amazing scenery that is Aqua Dulce, California (famous for Blazing Saddles and Duel among others). The picturesque desert sands and canyons make for some great scenery. But when they are not busy shooting the scenic landscape, a lot of this becomes rough and not well lighted. The night scenes in particular need a lot of help but at least these are few and far between. It is not bad, but it is not very good either (once they get past the scenery).

For the audio portion, we get a 5.1 English Dolby Digital track. As mentioned before, I really feel that a packed Blu-ray would have benefited this movie exponentially. The sound is fairly normal and it hardly sounds epic at all. Surround usage does occur but its fairly limited to the occasional sword clash or perhaps a few vocal tricks. At least dialog is fairly clear and I really could not find anybody that I could not understand. English and Spanish subtitles are also available.

This movie is all about levels of frustration. It has a ton of potential but it is all wasted on execution and production. Details are lost and even though the cast is talented, they are never used to the best of their abilities. It is pretty bad that the hero of the picture is out bad-assed by not one but two characters (Moss and Honsu) for almost the entire film. It is a shame that they did not try to change the movie around a little bit and sell it for television syndication instead.

The disc technically is unfortunately about as average as we can get. Video, average, audio average, and the extras are just terrible. How does a making of featurette last only three minutes? A commentary should have been mandatory here. I was interested in how they made the film, but it’s almost like I was not supposed to care. If you like watching movies that are almost there but not quite, I guess I could recommend this one. But in reality, this is an exercise in lack of execution. It’s a shame really because it had potential.

Michael Durr has been reviewing movies for the better part of fifteen years now. He primarily enjoys thrillers, sci-fi, animation and even a little courtroom drama. His favorite films include Escape from New York, the Goonies and anything with Alyssa Milano. When he’s not praising Kurt Russell as the greatest actor of our time or scratching his head over a David Lynch flick, he’s spending time at home in Texas with his lovely wife, Lori and his amazing son. How they put up with him is a mystery, but even Basil Rathbone doesn’t have the time to solve that one.
Snowmageddon (Blu-ray) We Can’t Go Home Again & Don’t Expect Too Much