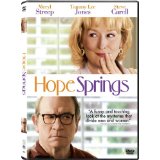 Help me out here. I know the traditional gift for a couple’s 25th wedding anniversary is silver and that gold is supposed to mark 50 years. But what do you get a spouse to commemorate your considerably less ceremonial 31-year wedding anniversary? I’m not sure what the answer is, but I don’t think one week of intensive marriage counseling is the conventional way to go.

Kay (Meryl Streep) is desperate to reconnect with her husband, Arnold (Tommy Lee Jones). Kay and Arnold are unquestionably devoted to each other, but their love life is mired in a years-long rut. (They sleep in separate bedrooms and we eventually learn they haven’t had sex in nearly five years.) To help reignite the spark in their marriage, Kay signs the couple up for a weeklong series of sessions with renowned couples’ specialist Dr. Bernard Feld (Steve Carell) in the quaint town of Great Hope Springs, Maine.

At first, the script by Vanessa Taylor, making her feature screenwriting debut, seems ridiculously lopsided in Kay’s favor. The early scenes depicting Kay and Arnold’s polite, passionless daily routine are appropriately painful, but Arnold— with his face perpetually buried in a golf magazine — comes off as clueless and terse nearly to the point of being cruel. (You almost want him to actively be a jerk because then he’d at least be making eye contact with Kay.) As the therapy scenes progress, however, we learn both of them share responsibility for the shortcomings in their marriage. (You can tell how well their therapy is going by how close to each other Kay and Arnold are sitting on Dr. Feld’s couch.)

The film proceeds at a leisurely pace, making each of the revelations in Kay and Arnold’s therapy sessions feel totally earned. The movie, marketed as a “romantic comedy for adults”, also hints at several rom-com conventions — wacky sidekicks for both Kay and Arnold; the quirkiness of small-town folk — before letting them curiously fall by the wayside.

In fact, the entirety of Hope Springs plays out rather simply from a cinematic standpoint and it’s easy to imagine this exact same story acted out as a two-person play. (Dr. Feld’s disembodied voice would be coming from somewhere off-stage, of course.) Good actors like Elisabeth Shue and Jean Smart are overqualified for the tiny parts they’re asked to play in this film. (Shue’s role is especially pointless.) Only Mimi Rogers, in the movie’s final scene, makes an impression. (And that’s mostly because her presence serves as a payoff for an earlier moment, not because Rogers did anything special.)

Naturally, the biggest attraction here is seeing heavy hitters Streep and Jones do their thing.

Streep (doing strong work with a simple stammer or sigh as the birdlike Kay) is barely able to tamp down her radiance as an actress, despite the fact that her hopeful character is stuck in a rut. The actress clearly has a lot of trust in director David Frankel — who guided her to one of her 47 Oscar nominations (I’m guess-timating) in The Devil Wears Prada — since she is asked to act out certain things in a movie theater and in bed by herself that we’re not necessarily used to seeing Meryl Streep do on screen. Meanwhile, this has been a big year for Jones: he’s pretty much a lock to earn another Oscar nomination for Lincoln, and he co-starred in the shockingly-good Men in Black 3 this past summer. Here, he’s the star of the show as far as I’m concerned. The script doesn’t offer very many set-up/punchline jokes, so the majority of the laughs come from Arnold’s crankiness over being dragged into the therapy sessions and his pragmatic money-mindedness. (He frets that the $4,000 they spent on the counseling sessions could’ve bought them a new roof.) These two acting heavyweights are extremely well-matched and generous with each other.

Meanwhile, Carell is a curious choice for the role of Dr. Feld because he isn’t asked to do much more than show up and exhibit a saintly amount of patience with this troubled couple. Dr. Feld feels a bit underwritten — he’s the standard, maddeningly-calm movie/TV therapist — which is fine because the story is not really about him. Carell is mostly known for his deadpan shtick, but I think he’s a remarkably well-rounded actor. Here, his warm affability is the perfect counterpoint to Jones’s forceful sternness.

Hope Springs is more of a drama with comedic moments sprinkled in and less of a straight-up geriatric rom-com. Jones and Streep elevate this simple, affecting movie, which — like Kay and Arnold’s marriage — chugs along deliberately without a lot of bells and whistles.